07/07/1866 – Falkirk Herald – Serious accident. A somewhat serious accident happened on Monday to a man named Matthew Russell, at Blackbraes Brickworks, belonging to Messrs J. &  J. Dougall. It appears that while he was at work at the clay pan, the shaft connected with it got heated, and one of the labourers stopped the engine for the purpose of getting it cooled. He told Russell to go out of the way he was going to reverse the engine, but he did not hear him and put his shovel into the pan. The engine being in motion this time it caught Russell’s shovel, drew it below the rollers, and threw him against the edge of the pan, breaking several of his ribs. He was conveyed home immediately. Dr Girdwood was speedily sent for and did all he could to allay his sufferings. The last accounts we have heard of him are, that he is progressing favourably.

18/11/1869 – Falkirk Herald – Coals, bricks and fireclay. The Blackbraes diamond coal, so much used some years ago, may now be had at 9s per ton, delivered in Falkirk and Grahamston. Other qualities as formerly viz Blabraes soft splint 8s 6d per ton. James Russel and Son can deliver at Grahamston Station.

Blackbraes composition bricks at 22s per 1000

Apply to Peter Stewart, Pleasance or at Grahamston Station.

At Broxburn Junction … 30 6 per thousand.

At Grangemouth … 30 per thousand.

At Kirkliston … 33 per thousand.

At Linlithgow … 27 per thousand.

18/11/1876 – Falkirk Herald – Blackbraes bricks. Composition bricks for sale at 31s per 1000 delivered at Grahamston Station. Nine courses of these bricks are equal to 10 others and there is a saving in wages too. Apply to James Russel & Son, Falkirk.

Below – 1896 – Blackbraes Brickworks marked as disused. 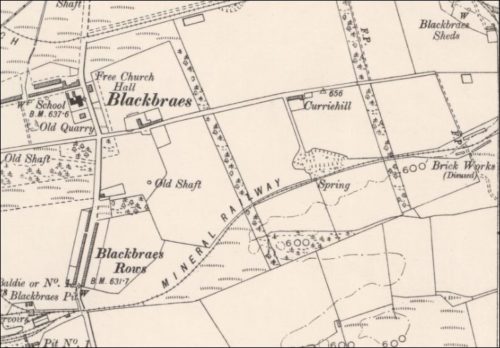