Early 1850’s –  Early in the ‘fifties (1850’s) the deceased, James Dougal, joined with his brother, Mr John Dougal and others in a lease of Craigend Brickworks, south of Polmont Station, which J & J Dougall carried on successfully of 19 years.

11/12/1851 – Falkirk Herald – To be let – The Craigend Brick and Tile Works, for a term of years as may be agreed upon. The seams of fire and common clays are of first-rate quality and the Works being in good going order, with an excellent demand, afford a very favourable entry to an enterprising tenant. Craigend Brick and Tile Work are situated near Polmont, a very short distance from a branch of the Edinburgh and Glasgow Railway and the Union Canal. Application to be made at Craigend House by Linlithgow.

10/12/1856 – Glasgow Herald – Fire Clay to let. The fire clay in a portion of the lands of Craigendmuir in the Barony Parish. The clay has been ascertained by for bores to extend under 15 or 20 acres and consists of 2 seams. one 8 feet or thereby in thickness and the other varying from 8 to 31 feet. It is apparently the same clay that is presently worked at Garnkirk and at Heathfield Clay Works – the quality of which is well known. The clay field is intersected by the Caledonian Railway and the clay is within a moderate distance from the surface, and may be worked easily and cheaply … (Note SBH – I am uncertain if this information relates to Craigend Brick and Tile Works but I have recorded it here meantime to ensure it is not missed)

21/11/1859 – Caledonian Mercury – To builders and others – Peter Ferguson, Agent for Craigend Brickwork. Depot – 69 Fountainbridge, Edinburgh. Has always on hand a large Stock of roofing tiles and brick of all kinds, at the following prices:- 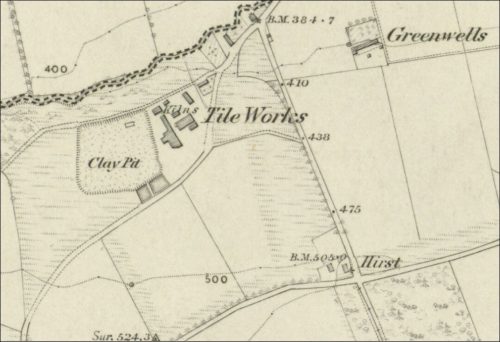 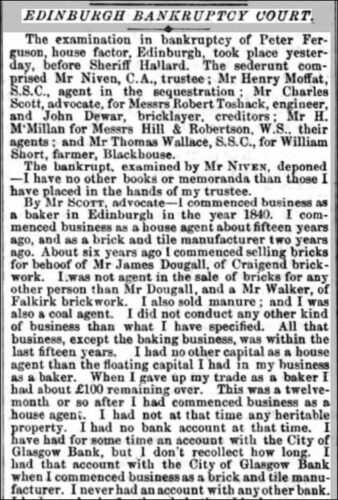 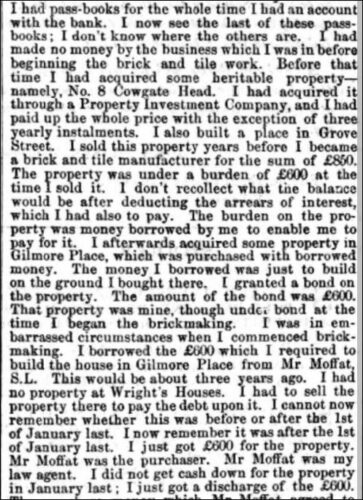 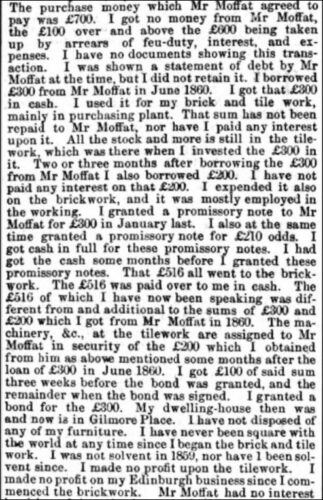 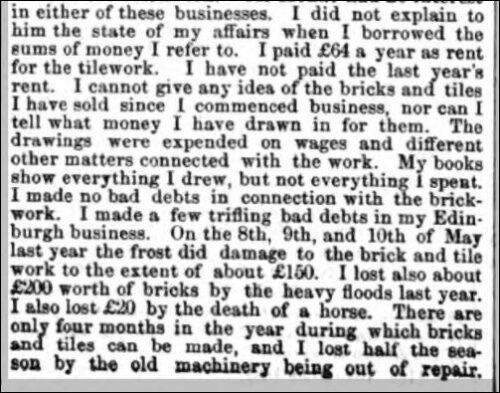 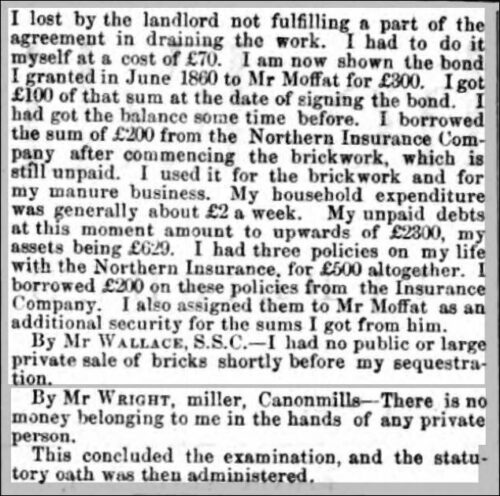 26/06/1862 – Falkirk Herald – Craigend Brick and Tile Work for sale. There will be exposed for sale by public roup (if not previously disposed of by private bargain), within Messrs Cay & Black’s rooms, 65 George Street, Edinburgh on Wednesday the 9th day of July 1862, at 2 o’clock afternoon. The Craigend Brick and Tile Work, situated on the land of Hirst, in the Parish of Muiravonside, and County of Stirling, with upwards of 12 acres of land, and with the dwelling-house, occupied by the present tenant of the work, four workmen’s houses, a six-stalled stable, grainhouse, and office, &c.; and also all machinery requisite (including a steam-engine of about 25 horsepower) for grinding and manufacturing fire and common clays. Upset price, £3000.

The land contains both fire and common clay of the first quality, and the clay is nearly inexhaustible. The work is at present let to good tenants at the rent of £156. The lease expires at Martinmas 1870, when a considerable increase of rent may be obtained, as the articles manufactured at this work are in high repute throughout the country. The rent of the land is about £4 10s. Further particulars may be had on application to Mr Learmonth McKenzie, at Craigend House; to Messrs Russel & Aitken, Writers, Falkirk; or to Messrs Gibson-Craig, Dalziel, & Brodies, W.S., Edinburgh, who are in possession of a plan and of inventory of the machinery. 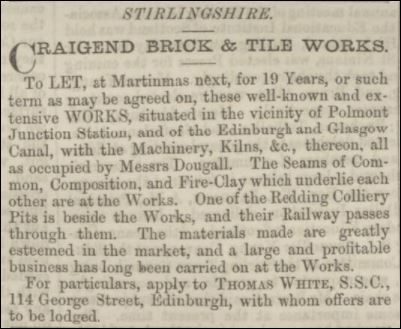 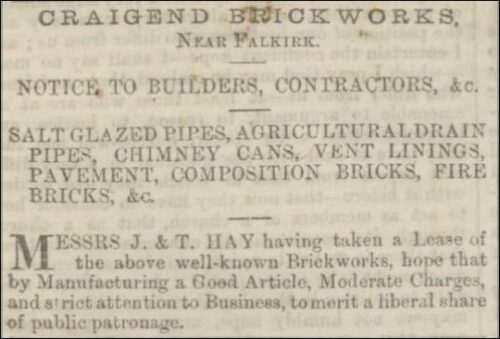 15/07/1911 – Falkirk Herald – Stirling County Council meeting … The condition of a number of houses throughout the district, especially the houses composing the village of Standburn, Drumbowie Row, and at Old Brick Work having been brought under notice, an inspection of the houses was made and the proprietors were called upon to put them into a proper condition. Standburn Rows now adopted the daily removal system of the ashpit refuse. Drumbowie Row houses have been emptied by the owners, and improvements are to be carried out at Craigend Old Brick Works houses …

The following Dougals are all sons and daughters of my great-great-grandparents, William Dougal & Marion Ferguson of Linlithgow, all of them born either in or around Linlithgow.
Elizabeth Dougal  1816-1884  married Thomas Newton  1816-1884. Thomas as a young man was a sailmaker at Carronshore, Larbert, and then was a tenant at Drumkilbo Tileworks from about 1856. (Owner, Rt. Hon. Lord Wharnecliffe). Continued till at least  1871, but by 1881 Thomas was farming at Kingoldrum, Angus
Janet Dougal   1819-1896  married Robert Meikle 1818-1897 of Linlithgow. They were also at Drumkilbo Tileworks during the same years as Elizabeth & Thomas Newton. By 1871 Robert was farming at Polmont
James Dougal  1821-1893 – Erected Craigend Brickworks, and with his brother, John Dougal and others carried on the business successfully for 17 years. In 1868 Callendar Coal Company was formed, which James was coal master of, employing 310 men in 1881.
John Dougal  1825-1899  was with James at Craigend Brickworks, and by 1861 was farming at Muiravonside.
Alexander Dougal  1828-1899  as a young man was at Rentonhall Brickworks, Morham, East Lothian, ( learning the trade ? ) About 1859 he was at Forgandenny Brick & Tileworks as a tenant. By 1869 he was back in Linlithgow, and Winchburgh Brick and Tile works had begun. With 2 of his sons in the business, Winchburgh Brickworks continued beyond Alexander’s death in 1892.
Drumkilbo Tileworks made the bricks for the railway tunnels at Dundee Railway Station.
Winchburgh Brickworks used the canal for transporting bricks and coal to their depot in Edinburgh. They had a yard at Linlithgow Canal Basin for the same purpose. Another relative was in charge of this and lived in the cottage on the canal which is now a tearoom.
It would be fitting for it to be recorded that 5 members of the family were all connected with early brickmaking.
3 others were successful boot and shoemakers in Linlithgow, and my great-grandfather, Laurence Dougal was an iron founder in Bathgate, but that is another story.
Tagged with: Alexander Dougal, Craigend Brick and Tile Works, Drumkilbo, Forgandenny, J and T Hay, James Dougal, John Dougal, Rentonhall, Robert Walker - Falkirk