Avoncrook Tile and Brick Works, Crawhill, Torphichen, West Lothian possibly aka Crawhill. (Note – SBH – Please read this along with the page for the Wallhouse Brick and Tile Works as I believe they may be one of the same or perhaps their locations were within 100 yards of each other. John Alexander operated both. Personally, I believe they are the same location but the works changed names in c. 1860 from Wallhouse to Avoncrook Brick and Tile Works).

16/08/1860 – Falkirk Herald – Tilework in Linlithgowshire to let. The Avoncrook Tile and Brick Works situated on the farm of Crawhill about a mile west of the village of Torphichen will be let for such a number of years as may be agreed upon. The Works are compact and newly erected and are fitted with steam machinery on the most recently approved principles. There is a Station on the Bathgate and Slamannan Railway about 1/2 a mile from the Works …

01/07/1863 – North British Agriculturist – Tilework and sawmill on the estate of Avoncrook to let. The Avoncrook Tileworks and sawmill situated about four miles from Linlithgow, three from Bathgate and half a mile from the Westfield Siding of the Monklands Railway. The works have recently been erected and are fitted with an eight horsepower steam engine, West’s plugging and making machine, kilns, sheds &c and are at present in full operation. The circular sawmill is also new and well-appointed.  Along with the works, there will be let about 12 acres of land and three good cottages for workmen. Also, if desired, the mansion house of Crawhill with office and garden attached. The works may be seen by application to the manager there and the conditions of the lease are in the hands of Messrs Glen & Henderson, writers, Linlithgow, who will receive offers until 24th July. Linlithgow June 25, 1863. 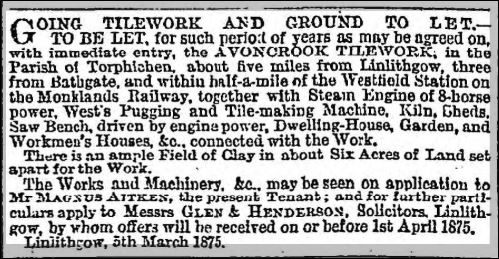 05/07/1875 – The original full lease between Henry Cadell Esquire of Grange and Avoncrook and Mr Robert Neill of Avoncrook Tilework. Its includes … “the houses, sheds kilns and machinery, sawmill, bench, shed, land and stance of work and houses called and commonly known as Avoncrook Tilework, all as lately wrought by and in the occupation of Magnus Aitken as tenant thereof … a fixed money rent of £40 sterling and a royalty or lordship of one sixteen part of the price or prices at which the article made or manufactured at said tileworks shall be sold or otherwise disposed of at the kilns or works … the said Robert Neill binds and obliges himself and his aforesaid to keep regular and distinct business books in connection with the said tilework in which they shall enter daily and accurately, accounts of the sales and disposal of all articles manufactured thereat – and report same to the said Henry Cadell and his foresaid at four times in each year … further, the said Robert Neill hereby binds and obliges himself and his aforesaid that in digging the clay in the said field as well as in the land hereby let, the surface earth, when removed, shall be laid aside and as soon as the clay is taken out, he shall be bound so far as practicable to fill up the whole and level the surface by replacing the soil so taken off and otherwise restore the said land to an arable state as fir for all farm operations as it was before being broken up. Declaring always that in digging for said clay the said Robert Neill shall be bound as he hereby binds and obliges himself and his aforesaid to do so by a trench never at any point exceeding ten yards in breadth and shall be bound to fill up and restore to an arable state all land beyond this breadth so far as is practicable …

24/11/1888 – Airdrie and Coatbridge Advertiser – Will the Caledonian Railway really come? When Dr Wilson at the Combe Lecture last Wednesday gave an illustration as if the Caledonian as well as the N.B. Railway were actually here, the applause showed the old eager desire for such a consummation. It is curious that we hear again a rumour that the Caledonian have been measuring near Crawhill Brickworks, having a new line in their eye to come by way of Bathgate. It is said that Mr Stewart of the Westfield Works, and others, are anxious for it. Our Bathgate Commissioners should petition.

Below – 1896 – The area in which the Avoncrook Brick and Tile Works was probably located. 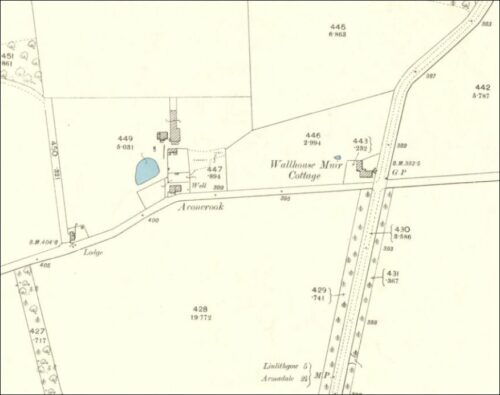