Canmore – A large brick and tile works consisting of three long drying sheds and two large kilns. A 10 h.p. steam engine is used in the manufacture. The clay pits lie to the west (one is shown at NS 9670 7187) and the clay is conveyed to the sheds by a small iron tramway. About sixteen hands male and female, constantly employed. The property is feued by John Alexander from W Gillon of Wallhouse.

1850s – Brickmaking at Armadale, West Lothian, Scotland – S. Campbell Passmore – … At first, the Monkands Iron Company bought bricks from the Broompark Works near Torpichen but then the company established their own brickworks … 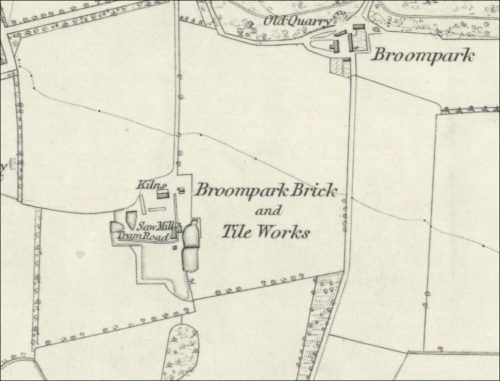 1855 – 1859 – ScotlandsPlaces – Broompark Brick and Tile Works. A large brick and tile work, consisting of 3 long sheds for drying the bricks etc and two large kilns for burning them; a steam engine of 10 horsepower is used in the manufacturing the bricks etc; the clay pits are to the west of the sheds and a small iron tramway runs to them, by which the clay is conveyed to the shed. where it is converted into the tiles etc; about 16 hands male and female are constantly employed, and the whole is the property of Mr John Alexander; who has it feud from W. Gillon Esq. of Wall House

06/07/1865 – Falkirk Herald – A girl, named Catherine Leech, daughter of a miner residing in Engine Lane, Bathgate, while at her usual employment in Mr Alexander’s Brick and Tile Works, Broompark, had one of her arms frightfully mutilated, by the machinery in the clay mill, as to render amputation of the limb at once necessary.

1890s – The brick and tile works are described as in ruins.