Below – 1859 – A map showing the relationship between Cowdenhill on the right and the Blairdardie/Garscadden Brickworks on the left. 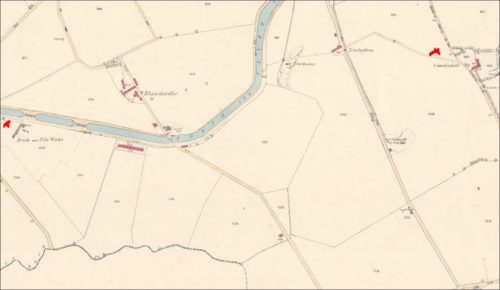 30/03/1874 – Glasgow Herald – Brickfield to let. Cowdenhill Brickfield in the Parish of New Kilpatrick & County of Dumbarton. That extensive brickfield known as the Cowdenhill Brickfield is situated on the North Bank of the Forth and Clyde Canal about 4 miles West of Glasgow. The clay is of good quality and the means of transport from the brickfield to all parts of Scotland is exceedingly convenient. Messrs R & W Horn, brickmakers, Garscadden by Duntocher, who have occupied Cowdenhill Brickfield for ten years and are not again to be offerers, will point out the works. Further information may be obtained on application to Robert M. Rodger, Estate Factor, Royal Bank of Scotland, Airdrie who will receive offers till 31st curt., stating an annual fixed rent and optional lordships on the bricks made. The highest or any offer may not be accepted. Royal Bank of Scotland, Airdrie. 10/03/1874.

Below – 19/05/1875 – Glasgow Herald – Cowdenhill Brickfield to let. Situated on the banks of the Forth and Clyde Canal about 3 miles West of Maryhill.

Below – 26/09/1879 – Glasgow Herald – Brickwork for sale at Cowdenhill situated on the banks of the Forth and Clyde Canal 4 miles above Bowling and about 2 miles from Duntocher and 1 mile or thereby from Yoker and Clydebank … (Drumchapel?)

Below – 1896 – Cowdenhill is marked on this map but there is no mention of the brickworks/brickfield which was situated North of the canal. 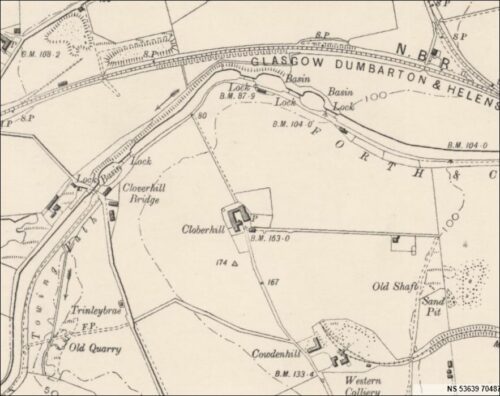 22/03/1921 – Sheffield Daily Telegraph – The body of a well-dressed man has been found in a clayhole at Cowdenhill Brickfield, Drumchapel, Dumbartonshire. The throat was cut from ear to ear and an empty razor case was found in the man’s possession.