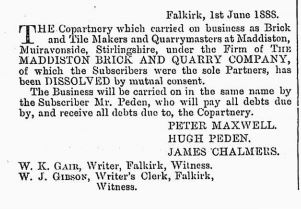 Below – 12/12/1891 – Falkirk Herald –  Ex Maddiston Brickworks blacksmith taken to court after he left the company but refused to move from the tied cottage. 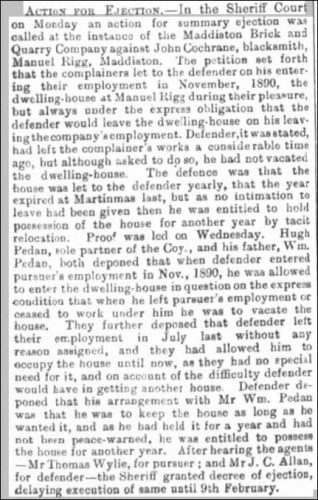 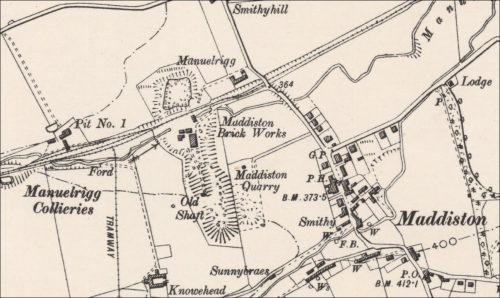 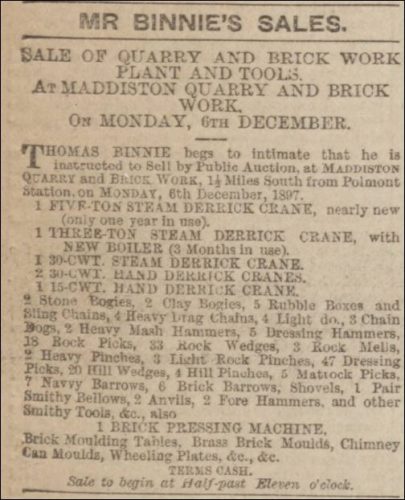 18/12/1897 – Glasgow Herald – New public company registered in Edinburgh last week – Maddiston Brick and Quarry Company Limited to acquire a lease of Maddiston Quarry and of the site of the brickworks lately occupied by the Maddiston Brick and Quarry Company, the capital being £5000 in £1 shares.
04/10/1899 – Falkirk Herald – Wanted contractor for emptying Newcastle and continuous kilns. None but first-class steady men need apply. Total abstainer preferred. Apply Maddiston Brick and Quarry Co Ltd, Polmont Station.
17/01/1901 – Falkirk Herald – Death of Mr Hugh Peden, coalmaster … Born fifty-one years ago at Stane Castle, near Irvine, Mr Peden came at an early age to this district, and on leaving school entered the office of the Redding Colliery Company, where he was engaged for over twenty years. After leaving there, he joined the Maddiston Brick and Quarry Company, of which he eventually became the sole partner, and carried on the brickwork and quarry at Maddiston until a few years ago. In business, however, he always inclined towards the coal trade, and about seven years ago he became a partner of the Eastrigg Coal Company, Westfield, in which company he was at the time of his death. He was also connected with several other public companies and was a director of the Airdrie Steel Foundry Company, Limited …
Below – 17/06/1905 – The Scotsman – Maddiston Freestone Quarry and Brickworks to let. 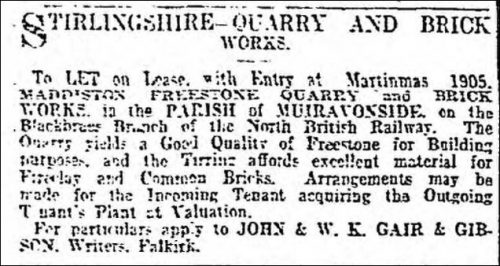