(Note – SBH – See the 1896 and 1914 maps below. The Bishopbriggs/Huntershill Brickworks move location during this time.  The references below to Thomas Gibb having worked at Huntershill and Bishopbriggs suggest 2 different sites but basically, they are almost identical locations on the maps. I am uncertain as to the situation).

Below – 1896 – Bishopbriggs or Huntershill Brickworks. 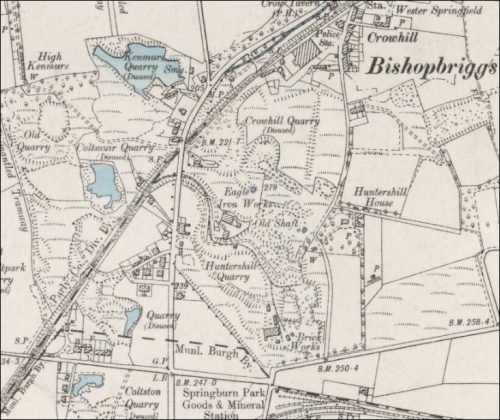 19/06/1897 – Dundee Advertiser – New Scottish companies. The Bishopbriggs Brick Company Limited to carry on the business of brickmaking in all its branches. Capital £6000 in £1 shares. 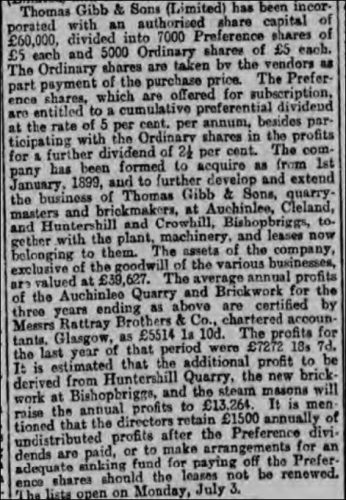 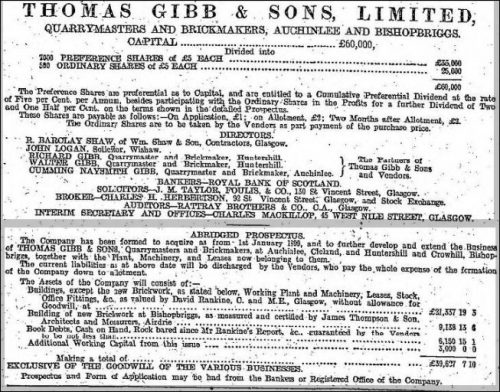 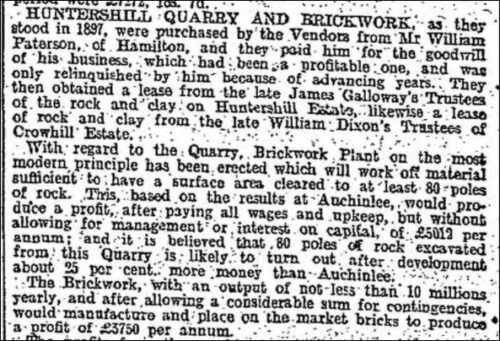 07/02/1900 – Kirkintilloch Herald – Overhead bridge at Bishopbriggs. The minute of the Committee appointed to deal with the application by the Bisbopbriggs Brick Company to erect a bridge over the public road in Crowhill Road, few yards south of Muirpark Terrace, for the purpose of conveyance to the works of material for brick making purposes, stated that at the meeting plans of the proposed bridge had been submitted considered. They showed that the bridge would be erected at a height of 14 feet from the surface of the road and that its length from abutment to abutment would be 19 feet. The Committee expressed their approval of the proposed height of the bridge, but in connection with the proposed length of the bridge from abutment to abutment, they agreed, in view of the probability of the widening of Crowbill Road in the near future, to require that the length of the bridge between the sides abutments fronting the road shall be not less than 22 feet, the east abutment of the bridge to placed feet further from the centre of the road than is proposed under the plans submitted. The Committee, in addition the foregoing stipulations, resolved to append the following conditions to their granting the desired permission to erect the bridge referred to:—(1) That the Company shall, go far as within their power, prohibit the posting, on or about the bridge or abutments thereof, of any handbill, advertising placard, or other disfiguration; (2) That the Company shall not let any portion of the bridge or abutments thereof for the beforemontioned purpose; That the lattice work of bridge shall be of greater height, and shall be more consolidate, than is depicted on the plans submitted, the Committee being of opinion that the bridge, from artistic standpoint, would thereby be considerably improved, and the liability to accident, through horses on road taking alarm the movement of hutches passing over the bridge, reduced: That corrugated iron rooting shall be placed immediately under the bridge in such manner effectually protect foot passengers from rain percolations; (5) That the Company shall form a suitable footpath of not less than 4 feet breadth, measured from the wall of the east abutment and side thereof fronting the road, such footpath to run the full width of the bridge; (6) That the Company, or their successors, shall, when need for the use of bridge in connection with their brick-making operations at Bishopbriggs shall have ceased, cause the same and its abutments, etc., to be removed; (7) That the whole works relative to the construction and erection of the bridge shall be carried out with a view to the amenity of the district. The Committee instructed the Clerk forward a copy of this minute to the Company, and, upon receiving their assent to the conditions and requirements before set forth, intimate to them that, subject to same, the work of erecting the bridge and appurtenances may proceed whenever suitable.

07/02/1901 – Kirkintilloch Gazette – The Bishopbriggs Brick Company submitted plans to the council to build a bridge over Crowhill Road a few yards south of Muirpark Terrace for the purpose of conveyance to the works of material for brick making purposes. Bridge to be 14 feet high and 19 feet from abutment to abutment. This was passed after an amendment and to increase the width from abutment to abutment to 22 feet.

06/04/1901 – Falkirk Herald – Action against a local builder. In the Falkirk debts recovery court some time ago, proof was lead at considerable length in an action at the instance of Thomas Gibb and Sons Ltd, Quarry and Brickworks, Bishopbriggs against Owen McKearney, brick builders, Comely Terrace, Falkirk. The sum sued for was £26 1s 3d being the price of bricks in connection with the erection of the chimney stalk at Perths Electric Light Station. The defender admitted being due £13 1s 9d but objected to paying the balance on the grounds that the pursuers had supplied common clay blocks in place of fire clay blocks as ordered for the chimney stalk … The Sheriff finds against the pursuers.

10/07/1901 – Kirkintilloch Herald – Bishopbriggs Brick Company. Intimation was ordered by the First Division of the Court of Session on Thursday of a petition by the Bisbopbriggs Brick Company (Limited) and John W. Gourlay, C.A, Glasgow, liquidator thereof, in which a supervision order is asked for. The company was incorporated in June 1897, with a capital of £6000 divided into £1 shares, of which 5000 shares were in issue and were fully paid up. The company was unsuccessful in its trading, and dividends have never been paid to shareholders. All the capital of the company has been expended, and sums obtained on loan from the bank and from certain shareholders from time to time have also been spent. The company is insolvent and its liabilities to its creditors largely exceed its assets. In these circumstances, resolutions were passed by the shareholders approving the proposal that the company should be wound up voluntarily but in order to prevent preferences being obtained by certain creditors, the liquidator considered that it was desirable that liquidation should be placed under the supervision of the Court.

05/11/1902 – Kirkintilloch Herald – Lanark County Council … At a meeting of a subcommittee on public health, the sanitary inspector reported that in connection with the smoke nuisance at Messrs Gibb and Son’s brickworks, Huntershill, Bishopbriggs since submitting the last report the furnaces had been damped down and the manufacture of bricks entirely suspended. The nuisance had therefore in the meantime, been abated. The sanitary inspector reported that observations of the smoke emitted from the chimney of the works of the Bishopbriggs Brick Company did not show a sufficient quantity of black smoke to warrant action being taken at present. 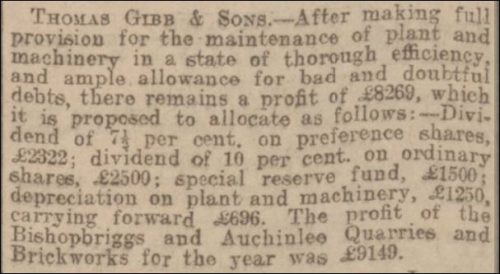 27/07/1904 – Kirkintilloch Herald – Sheriff-Substitute Balfour has just issued his interlocutor in an action that raises a point of considerable interest to Bishopbriggs and Auchinairn people. The pursuer was John Conway, labourer, 87 Auchinairn Road, Bishopbriggs and he sued the Bishopbriggs Brick Company, Ltd, for the sum of £250 in respect of damages done to his son, Charles Conway, 6 years of age, who was knocked down and seriously injured by a hutch while standing on the public footpath leading from Auchinairn to Bishopbriggs on 1st June of last year. The defenders contended that this was not a right of way, but private ground, and that the boy had no right to be where he was. The Sheriff-Substitute has given decree for the pursuer and awarded him £30 damages and expenses.

12/01/1906 – Milngavie and Bearsden Herald – Lanark County Council … A report by the Sanitary Inspector was also submitted. It stated that he had made an inspection of the road and that from its junction with the Kirkintilloch and Springfield Roads, for a distance of 200 yards or thereby southwards, it was badly cut up, principally by the heavy traffic from Bishopbriggs Co’s Brickworks …

17/05/1911 – The Scotsman – Sale of quarry and brickwork plant at Hunterhill Quarries and Brickworks, Bishopbriggs, on an early day. Shirlaw Allan and Co have received instructions from Messrs Thomas Gibb and Sons Ltd, owing to the termination of the lease to expose for sale by auction, the whole plant, as above. Hamilton. May 1911. 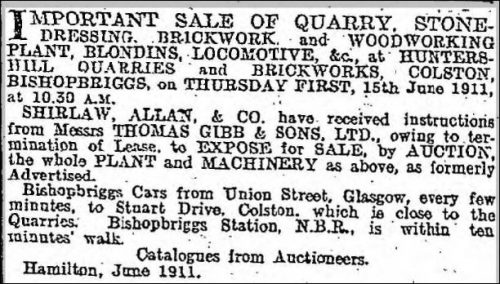 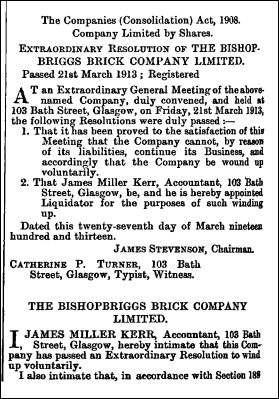 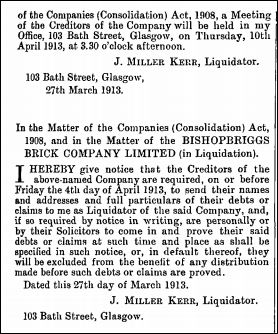 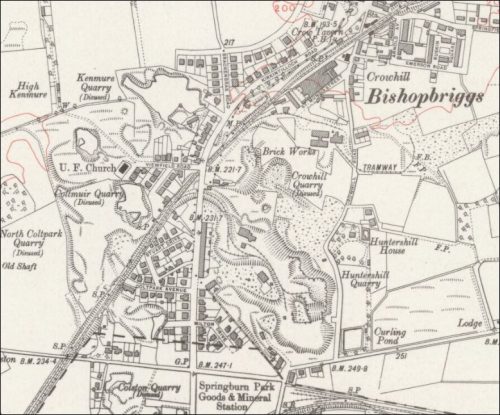 20/10/1937 – Kirkintilloch Herald – Obituary. The funeral took place on Thursday of Mr William Maxwell, who died at 1328 Springburn Road, Glasgow on 11th October … many years ago he was the manager of the Bishopbriggs Brickworks at Crowhill but giving up the brick trade he followed his trade as pattern maker up to his retirement a number of years ago … he was in his 73rd year …

07/09/1938 – Kirkintilloch Herald – Obituary. The funeral took place to Cadder Cemetery of Mr George Gibbs, 2 Marchfield Terrace, Springburn, who carried on business in Springburn for over years as a mason, bricklayer, and building contractor, and who died on 30th August, in a nursing home, after a brief illness. A native, of Coatbridge, his first job when he started business on his own account was the building of Bishopbriggs Brickwork, Crowhill Road, Bishopbriggs, and during his long association in the building trade, he carried out many important contracts …

23/04/1943 – Kirkintilloch Herald – Obituary – The death took place on Sunday, after a long illness, at his residence, Craigreid, Bishopbriggs of Mr Edward Miller. Well known in business circles, he was the proprietor of the Knapper Sand Quarry, Clydebank where the druid’s temple was discovered some time ago. He was a pioneer of the brick industry in Bishopbriggs district being a member of the firm that formed the Bishopbriggs Brick Coy Limited, Crowhill, Bishopbriggs over 40 years ago … Mr Miller was in his 76th year.