20/08/1902 – Kirkintilloch Herald – Purchase of Robroyston Estate. At a meeting of Glasgow Corporation on Monday, the cleansing committee recommended the purchase of Robroystonu Estate at the price of £40,000, with entry at Martinmas. The estate, which is about four miles from the Royal Exchange, extends to about 656 acres, with a rental, including farms, minerals, quarry, brickwork, houses, shootings, and feu duties, of £1023 15os 4d. and is subject to a Crown feu-duty of about £12 per annum. Mr Battersby moved the approval of the minutes and remarked that it one of the cheapest purchases the city had made. Bailie N. M. Thomson seconded the motion. Mr McFarlane said one consideration they had to keep in view in looking out for ground was that it must be within a radius of 12 miles of Glasgow. Rhydding Estate was on the N.B. Railway and this estate was on the Caledonian system, and it had the further advantage of having a mineral railway running through it. Mr Hugh Alexander said that if this was the best purchase the Corporation had made they had been singularly unfortunate. Mr Bilsland said the committee were congratulated on getting suitable ground. He wished to point out that this estate had a historical interest, and hoped arrangements would be made that the citizens might enjoy the privilege of visiting the estate. The minute was approved.

27/08/1902 – Kirkintilloch Herald – In connection with the annual inspection of the estates under the charge of the Cleansing Committee of the Corporation of Glasgow which took place yesterday, a statement was issued which refers, among other things, to the recent acquisition of Robroyston … A brickworks of the most up-to-date principle has been erected by means of which large quantities of blaes, the result of former coal workings are being used for the manufacture of bricks. Clay is also used, it being conveyed to the brickwork from the neighbouring quarry by means of a bogey railway …

01/02/1907 – Kirkintilloch Gazette – The Glasgow Central Fire Brigade were called Sunday to a fire which broke out shortly after one o’clock in the afternoon in a brick building used as a drying store by the Brick and Quarry Company at Robroyston. The building covers an area of 70 feet by 30 feet and is one storey high. The roof was burned off and a quantity of mouldings destroyed. The damage will amount to £300.

30/04/1909 – Milngavie and Bearsden Herald – Glasgow’s clayfield. The field of plastic clay which was discovered on Robroyston estate has been leased by the Corporation to the Springburn Brick and Quarry Company, the lessees of the brickfield in Robroyston estate, for 19 years from Martinmas next, at a rental £25 per annum, or, in the option of the Corporation, a Lordship of 1/2 per thousand bricks or tiles, and 4d per ton on raw clay. It is recommended that in view of the expense to be incurred by the company in erecting additional plant and buildings, that their present lease of the brickfield be extended for 11 years from Martinmas, the date of the expiry thereof, so as to terminate concurrently with the lease of the plastic clay.

09/06/1909 – Kirkintilloch Herald – The condition of Hillhead Road, Auchinairn. At a meeting of the sub-committee on the highways a letter, dated 7th curt., from Springburn Brick and Quarry Co., Springburn, to improving Hillhead Road, which extends from Auchinairn Road to Robroyston road, cutting from ten to fifteen feet from the highest part the road and depositing the debris in the hollow near the burn, was submitted, with the following report by the Surveyor, viz – Hillhead Road is in good condition. The gradient on the greater part of the road between Robroyston Brickworks and Auchinairn Road is somewhat steep. The proposal of the Springburn Brick and Quarry Company to take ten or fifteen feet from the highest part of the road and deposit it in the lowest part over Robroyston Burn, a distance of about 75 yards, would, no doubt, be an improvement on the existing gradients of the road. The expanse involved, however, in taking down and rebuilding retaining walls, heightening parapet walls on the bridge oyer Robroyston Burn, &c., and reconstructing the roadway as suggested, would out proportion the benefits derived by the general public using the road. With the exception of the traffic from the brickworks during the busy seasons, there is comparatively little traffic on the road. The meeting approved the above report. 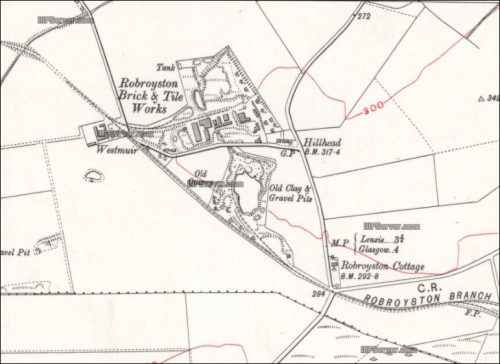 1921 – The 1985 publication ‘A survey of Scottish brickmarks’ suggests John Watson Ltd operated the works from around this date.

26/07/1921 – The Edinburgh Gazette – Notice – The firm of Springburn Brick and Tile Company, carrying on business at Hawthorn Street, Glasgow, of which the subscribers were the sole partners, having sold the business to a limited company, has been dissolved of mutual consent, as at 1st February 1921. All accounts due to the dissolved firm are to be paid to Messrs. Jno. & W. D. Hall, Accountants and Auditors, 19 Waterloo Street, Glasgow, who will pay all accounts due by the dissolved firm. Robert King, The firm of Springburn Brick and Tile Company …

07/11/1923 – Kirkintilloch – Mining Developments – Good progress is being made at the Robroyston Colliery of Messrs John Watson & Co Ltd. Two shafts have been sunk in the circular form and both are lined with bricks from top to bottom.  The hutches are made entirely of iron which is a big change from the wooden hutches common to most collieries. Several houses have been erected on the ground adjacent to the pits for the officials, staff etc. Close to the colliery the company also have a brickwork. The kiln at the brickwork is capable of holding 125,000 bricks and the machinery can produce between 12,000 to 13,000 bricks per day. Excavations are proceeding for the erection of another kiln, which will necessitate the erection of new machinery to cope with this further extension.

02/11/1927 – Kirkintilloch Herald – Assaulted his foreman. Because the foreman refused to give him his books ” when he wanted them, after staying from his work, Robert Colvin, 760 Springburn Road. Glasgow struck him on the face with his fist. He pleaded guilty at St. Rollox police court on Wednesday last, to a charge of assault, and was fined two guineas with the alternative of 14 days imprisonment. Accused was employed at Messrs. John Watson’s Brickworks, Robroyston.

28/03/1928 – Kirkintilloch Herald – A Marquis down the pit – Unknown to most of the employees, the Marquis of Douglas and Clydesdale paid a visit on Tuesday last to Messrs John Watson and Coy’s Robroyston Colliery. Accompanied by Mr James Black, Under Manager, the Marquis descended the pit, spending a considerable time underground. Returning to the surface he made a thorough examination of all the machinery. He also visited the company’s brickwork which adjoins the colliery where he was shown the process of mixing, pressing and turning the bricks. While highly impressed with all he witnessed, his Lordship, in conversation with several of the employees, showed a keen interest and knowledge of the various undertakings.

09/03/1929 – The Scotsman – The  Corporation of Glasgow are prepared to receive offers for the purchase of their Estates of Ryding, North Myvot and Robroyston … There is also a small area of non-arable lands leased at Ryding for the manufacture of fire clay goods (Brackenhirst Fireclay Works) and areas at Robroyston are leased to a brick and tile company …

17/05/1932 – Edinburgh Gazette – (In Voluntary Liquidation).  Springburn Brick and Tile Company. Notice is hereby given that a meeting of the creditors of the above-named company will be held in the offices of Thomson, McLintock & Co., C.A., 216 West George Street, Glasgow, on Thursday the 23rd day of June 1932, at 11.30 o’clock forenoon; and notice is also given that a General Meeting of the Company will be held on the same date and in the same place, at 11 o’clock forenoon, for the purpose of having the account of the liquidator, showing the manner in which the winding-up has been conducted and the property of the company disposed of, laid before the respective meetings, and of hearing any explanations thereof. Dated this 17th day of May 1932. John Duncan, C.A., Liquidator.

08/02/1933 – Kirkintiloch Herald – Robroyston Colliery is being offered for sale by the owners, Messrs. John Watson. Ltd. The colliery has large reserves of coal, and is fully equipped for an output of about 1000 tons per day. There are also brickworks capable of producing 25,000 bricks per day. A large number of local residents are employed in the colliery.

26/04/1939 – Daily Record – Distressing circumstances attended the death yesterday of George Borthwick (2), 61 Winifred Street, Robroyston, Glasgow. Along with a boy of about his own age, he strayed across a field to the brink of a disused clay quarry near Robroyston Brickworks, and, missing his footing on the greasy surface, fell to the bottom, a considerable distance, and was killed …

1959 – c.1965 – The 1985 publication ‘A survey of Scottish brickmarks’ suggests that the Robroyston Brick Co Ltd operated the works during this period.

17/04/1964 – The Edinburgh Gazette – Factories Act 1961, Employment of women and Young Persons Act. In accordance with section 117 of the Factories Act, 1961, the Minister of Labour hereby gives notice that, during the month ending 31st March 1964, he has made special exemption orders relating to the employment of women and or young persons at the following factories: … Robroyston Brickworks Ltd., Robroyston Road, Glasgow …

20/09/1974 – Edinburgh Gazette – Notification of an amendment by the City of Glasgow development plan concerning the site of the former Robroyston Colliery and Brickworks, extending to 44.2 acres or thereby, situated to the west of Robroyston Road, G.33, and to the north of Quarrywood Road, G.21, in the County of the City of Glasgow.