02/03/1861 – Glasgow Saturday Post – Calderwaterhead Agricultural Society ploughing match. Reference to an extra prize being given by Mr Lochhead, Auchinlea Tilework to the ploughman who ploughed his lot the best …

01/12/1883 – Wishaw Press – Cleland water supply district. A hearing of evidence at the county buildings … Alexander Lochhead, senior, tile maker, Auchinlee, said that Mr Gibb obtained water from his ground when it was not to be got. Alexander Lochhead, senior of Lochhead and Ferguson, tilemakers, Auchinlee deponed that the tenancy of the firm included a clay hole from which Mr Gibb got water. There was only an overflow in wet weather and he had a pond which was supplied from the overflow.

19/02/1887 – Wishaw Press – Golden wedding. There was a large gathering at Auchinlea Tileworks, at the residence of Mr Alexander Lochhead, to celebrate their “Golden Wedding” on the evening of Tuesday, the 15th. Mr and Mrs Lochhead are natives of Shotts Parish and have lived them all their lives, and have occupied their present dwelling for 28 years. Seven surviving sons and daughters and 21 grandchildren were present, besides other relatives and friends, including Mr Thomas Lochheed, of Wishaw, and Mrs Smith, Newmains, who acted as best man and bridesmaid at their wedding … Thos Gibb Esq was one of the guests along with James Ferguson Esq, Fairnieshaw (Ferguson may have been Lochhead’s business partner) … 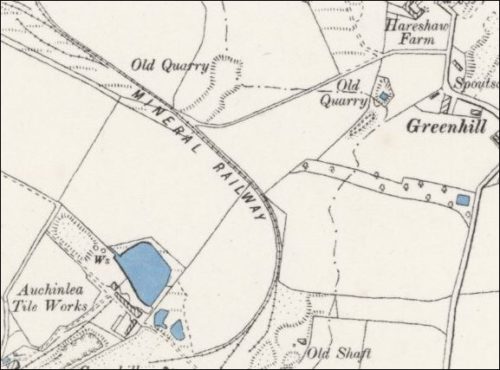 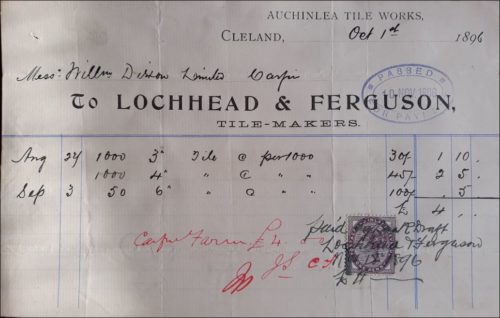 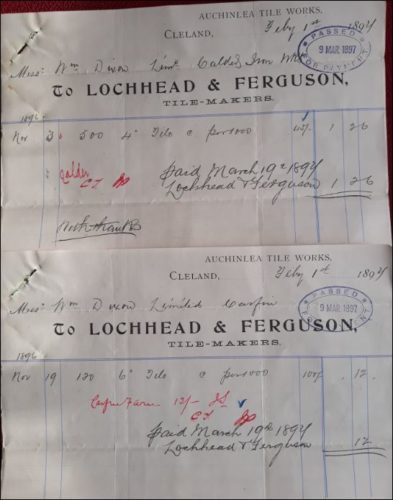 1910 – The claypit is marked on the map but not the tileworks. This suggests that the tileworks were by now disused but this is confusing with regards the 1912 – 1913 entry below. Perhaps in 1912, Lochhead and Ferguson were not operating from the Auchinlea Tileworks but another nearby brickworks.