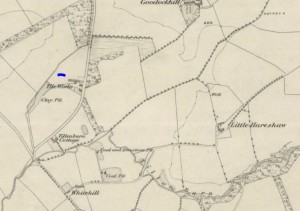 … There is an establishment at Little Hareshaw for the manufacture of water and sewage pipes, fire-bricks, chimney-cans, and other fire-clay goods … source

Disposed along the N bank of the Tillan Burn, to the ENE of Hareshaw, and SE of the site of Little Hareshaw farmstead, there are the remains of a tile works (NS86SW 63.01) and at least four coal mines.

The tile works is centred at NS 8172 6077 and comprise a number of grassed-over foundations and earthworks, overlying traces of rig-and-furrow. The mines are situated to the E of the works, spaced along the N bank of the burn in a line about 400m long. The first of these (CSW 4020) is situated above the gorge of the burn at NS 8177 6078. It consists of a large bing, partly quarried away, with two circular hollows on its NW side, either of which may indicate the site of the shaft. To the SW of the bing there is a possible adit cut into the slope at the base of the gorge, and beside this an incline leads back up the slope. The incline is aligned on the grassed-over remains of a possible building in which are set iron bolts, probably for mounting winding gear. Of all these features only the bing is depicted on the 2nd edition of the OS 6-inch map (Lanarkshire 1899, sheet xii).

A tramway runs around the edge of the bing described above and continues E along the top of the slope above the burn. An incline branches off from this to run down the slope to the second mine, at NS 8185 6080. All that is visible here is a rectangular hollow at the end of the incline, with a circular hollow a few metres to the W, but this is probably the site of the ‘Old Coal Pit’ depicted on the 2nd edition of the OS map (ibid) (CSW 4191). The tramway continues E to the third mine (NS 8201 6088; CSW 4031). Here, there is a slight hollow from which a crow’s foot bing, with three ‘toes’ projects to the SW, and there is another dump of spoil on the slope down to the burn some 60m to the WSW. This site is first depicted on the 1939 revision of the 25-inch OS map (Lanarkshire 1939, sheet xii.4), which shows the crow’s foot bing.

Archaeological notes – NS86SW 61 8149 6098. In an improved field 500m S of Goodockhill farmsteading there are the remains of a mine, consisting of a bing, a hollow (2m in depth and 7m in diameter), probably marking the top of the shaft, and two further hollows. A tramway runs SW from the probable pithead to join a track or tramway which passes the site on the W. This track then runs SE towards the tile works at Little Hareshaw (NS 86 SW 63.00). The site is depicted as an ‘Old Coal Pit’ on the 2nd edition of the OS 6-inch map (Lanarkshire 1899, sheet xii). (CSW 4027) Visited by RCAHMS (SDB), 14 July 1992. 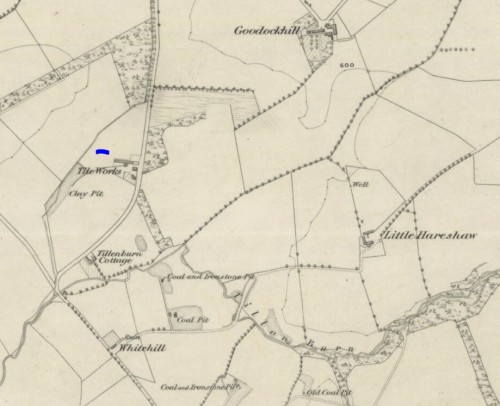