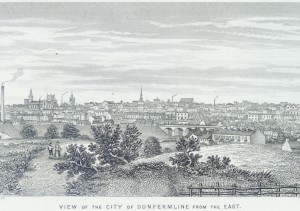 The sidings and headshunt that served the fireclay works and the coal pits have largely been removed by opencast mining. All that survives is a siding on the south side of the public road, which crossed the line at Balmule crossing (NT 0822 9011). 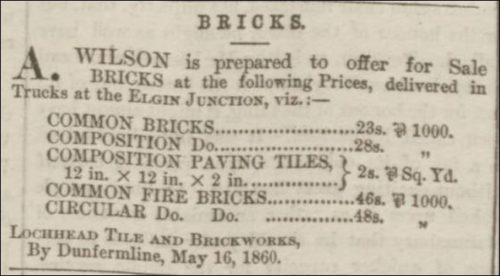 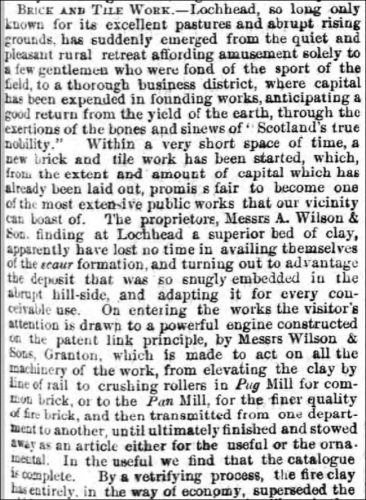 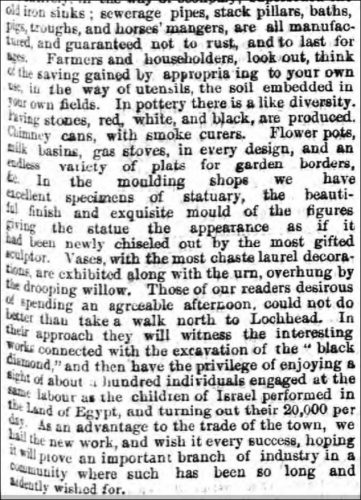 1862 – Lochead Brickworks, Dunfermline – A Wilson and Son (note spelling of Lochead as opposed to Lochhead) page 158. 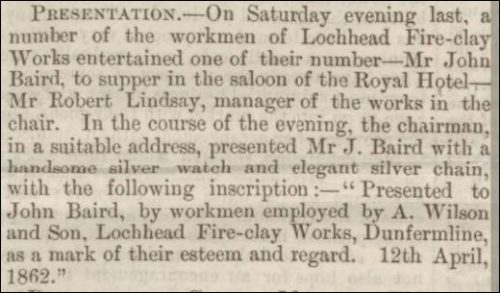 18/09/1862 – Fife Herald – Horticultural Society’s autumn show … But the best things, at least the newest to us, but extraneous to the flower and fruit show, were some vases and images of terra cotta, manufactured by Messrs Alexander Wilson & Son, Lochead Fire, Clay, and Tile Brick Works. The vases were for the garden, superb in appearance and classical in their adornment. The images were also for the garden, a kneeling nymph or naiad, quite in the antique style, and what might for a better name call a dolphin fountain, where a dolphin is represented with body and tail elevated, and with mouth open and spewing (or supposed to be spewing) the water into a fountain below. The fountain is formed of a shell such as the Tritons loved to sail in, and is embedded on the edge of a coral rock, all very beautiful and classical; and what is the most wonderful, all done at Lochhead, on a spot where, thirty-five years ago, we used to seek for linties nests! …

05/08/1863 – Glasgow Morning Journal – Highland and Agricultural Show, Kelso … There was a great display of articles made from fireclay such as pipes, bricks for pavement, cattle troughs &c. Mr Alex Wilson, Dunfermlinewas a large exhibitor in this department. His Venus was the most perfect figure that we ever saw made from fireclay …

Below – 27/11/1863 – Buchan Observer – William Stuart, Peterhead and Fraserburgh is the agent for Alexander Wilson & Sons. 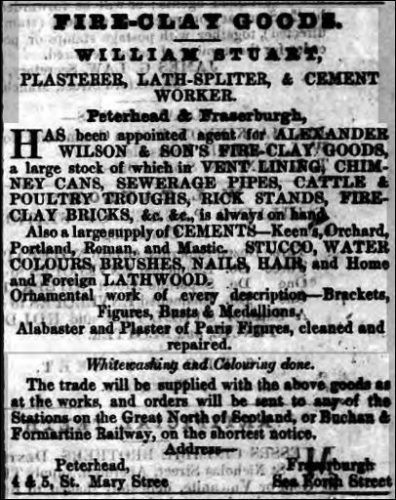 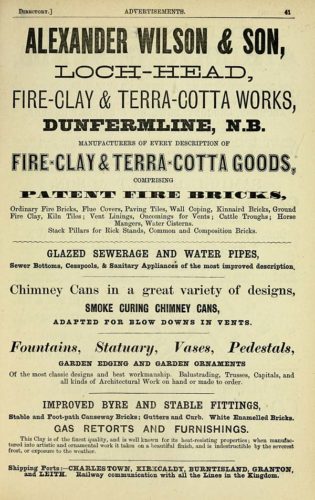 03/10/1868 – The Scotsman – Minerals in the West of Fife. To be let, coal, ironstone and fireclay under the lands of Drumtuthill and others adjoining, belonging to the Earl of Elgin. The minerals are level free to a considerable depth and a pit is open to the Five Fett Coal at Rosebank where it can be reached. The ironstone (blackband) is similar to that of Lochhead. Offers stating a fixed yearly rent will be received … Edinburgh 31/10/1868. (Note – SBH – I am not certain if the Lochhead Fireclay Works took over this lease but they certainly utilised land around Drumtuthill. Recorded here meantime). 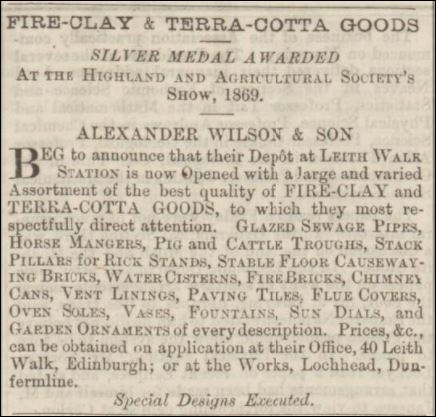 09/03/1872 – Renfrewshire Independent – On Sunday evening, a miner named Joseph Forde, while on a visit with several companions to the brickworks of Messrs Wilson A Co., Lochhead, Dunfermline, was killed in attempting to get out of the way of a bogie which was being conveyed along a portion of the underground workings. Forde had stepped to the aide of the rails, but, by doing so, became wedged between the wall and the bogie, and was crushed to death. The body of the deceased was carried to Balderidgeburn, where he resided.

Below- 02/05/1872 – The Scotsman – Paper on Fireclay Manufacture in Scotland read over by Wm Wilson, Lochhead Fireclay Works. 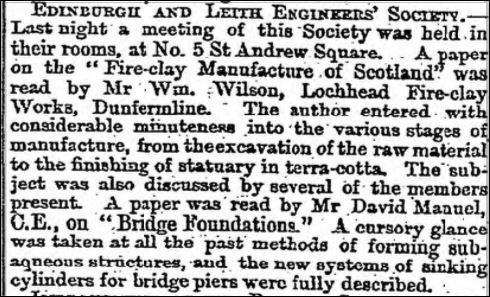 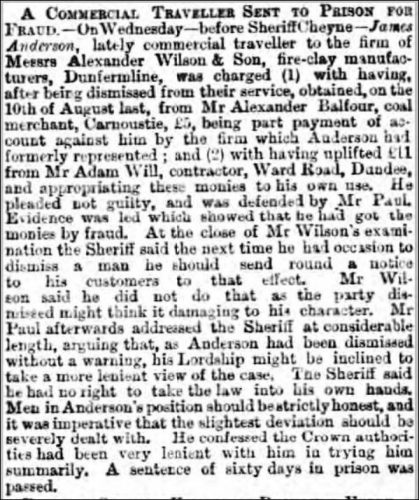 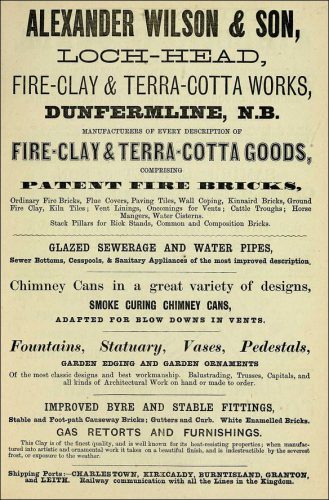 21/06/1878 – Dundee Evening Telegraph – Fall of a brick kiln near Dunfermline – Four men seriously injured. For some time back bricklayers have been engaged in erecting some brick kilns at Lochhead Brickwork, situated fully two miles from Dunfermline.  One of the kilns was completed fully a fortnight ago, and on Thursday morning the workmen began to remove the wooden centres in the arching of the kiln.  Competent judges at the work were satisfied that the centres might safely be removed was determined upon yesterday.  The workmen succeeded easily in removing the centres, but immediately this was accomplished the whole kiln came down with a crash., burying in ruins four of the men. No time was lost by the men at the work in beginning to unearth their companions, and in a short time the four men were extricated, when it was found the two most seriously injured were Hugh Shearer, aged twenty-four, who had both legs fractured, and John Archibald, several contusions over his body.  The other two here slightly hurt, and were able to remove themselves,  Mr Hamilton, the manager of the works, telegraphed to Dr Morris, of Dunfermline, and that gentleman, along with Dr Drysdale, went to the railway station, where the injuries the men had sustained were attended to.  Mr Arnott, the stationmaster, and all the officials did everything possible for the men, and with much promptitude Mr Arnott had Shearer put into a carriage and conveyed by the express train to Glasgow Infirmary.  Archibald was moved to his lodgings in Rumbling Well.  Mr Hamilton went to Dunfermline with the injured men, who, up to late on Thursday night, were progressing as favourably as could under the circumstances be expected.  It is calculated that fully ten tons of brick and other materials fell above the men.

17/06/1881 – Dundee Courier – On Monday a select party were privileged to see in operation a splendid new and exceedingly powerful telephone which has just been erected in the spacious premises in High Street of Messrs Wilson & Son, the proprietors of Lochhead Brickworks. Although the works are over 3 miles away from the office, the conversation was clearly maintained and songs were sung and tunes whistled, the whole being distinctly heard just as if the speakers and singers had been in the adjoining room with the visitors. Messrs Wilson do all the communication with their works by telephone and Mondays experiments bespeak at once of the enterprise of the firm and their desire to bring science to their aid in conducting their thriving establishment.

17/06/1881 – Dundee Courier – Excursion  – On Saturday morning the workmen employed at Lochhead Brickworks together with their wives and sweethearts had a trip to Port Laing near Inverkeithing. The excursionists were accompanied by the Elgin Band, and on assembling at the Rumbling Well the party, 200 in number, marched in procession to Walmer House, the residence of Mr Wilson, where they received a most cordial welcome. Walking to Comely Park Station, the train soon took the excursionists to Inverkeithing, from whence they walked to Port Laing where they spent a most pleasant day. During the day the Messrs Wilson visited the scene of enjoyment and did all they could to make the party enjoy themselves. The young people ran races and engaged in dancing. Messrs Wilson kindly distributed prizes to the best competitors in running, jumping, leaping, &c. Altogether, the party enjoyed themselves splendidly, thanks to the liberality of the Messrs Wilson, and the admirable arrangements made by Mr Niven, the manager the works. The party reached Dunfermline at an early hour in the evening, all highly pleased at the success of the day’s outing.

07/05/1887 – The Scotsman – Fifeshire – For sale by private tender – Lochhead Fireclay Works, Dunfermline. The above works which have been carried on for many years by the firm of Alexander Wilson and Son are situated about 2 miles north from Dunfermline. They cover about 15 acres and are connected with the N.B Railway. The works are admirably laid out and fully equipped with locomotive power, manual labour being reduced to a minimum. There are separate divisions for making composition bricks, unglazed fire clay goods and glazed fire clay goods, connected with which there are the necessary drying stoves, firing kilns and other machinery and accommodation including an excellent managers house. The machinery is of the most improved description and in perfect condition, its producing power estimated at 15,000 tons of fire clay and 15,000 tons of composition clay per annum. The lease which includes the right to the whole clay field of 210 acres has 13 years to run at a fixed rent of £50 per annum which if desired might be extended. There is no lordship. There is a considerable stock on manufactured goods on hand which will be included in the sale. Cards of admission to the works will be furnished by the subscriber, with whom sealed tenders may be lodged not later than the 10th day of June 1887. The seller does not bind himself to accept the highest or any offer. John Brewis C.A. 5 North Saint David Street, Edinburgh 06/05/1887.

24/09/1887 – Dunfermline Saturday Press – Lochhead Fireclay Works, Dunfermline. These works being now in operation, all description of bricks and fireclay goods can be supplied at current prices.

Below – 19/12/1894 – Glasgow Herald – Court case re the death of an employee at Lochhead Fire Clay Company due to a kiln collapse. 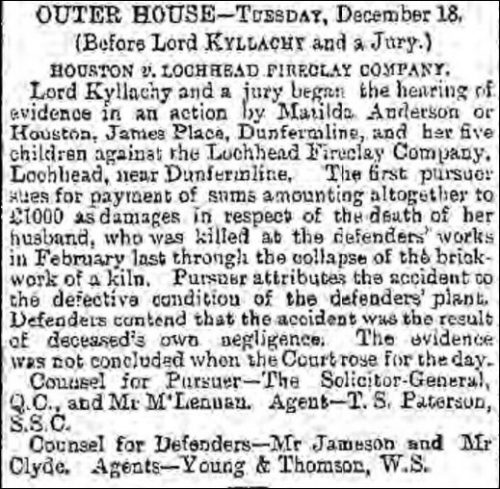 01/12/1900 – The Scotsman – Threatened strike at a Fife Fireclay Work. The miners employed at the Lochhead Fireclay Works, near Dunfermline have lodged their warnings in consequence of an intimation having been made of a reduction of threepence on the ton price, and of ninepence a day on the wages of the oncost workers.

06/06/1906 – Dundee Evening Telegraph – Fife Trade depression. Serious outlook – For some considerable time, dullness has been experienced in connection with the brickmaking industry in the district of Dunfermline. The Appin Fireclay Works of Messrs Street Brothers were on Monday shut down, although it was known for some time that this step was not unlikely. The brickworks at Inverkeithing carried on by the same firm have also been closed. About 100 men, it is stated, will be affected. The same dullness is being experienced at the Lochhead Brickworks, at which a number of men were recently paid off. 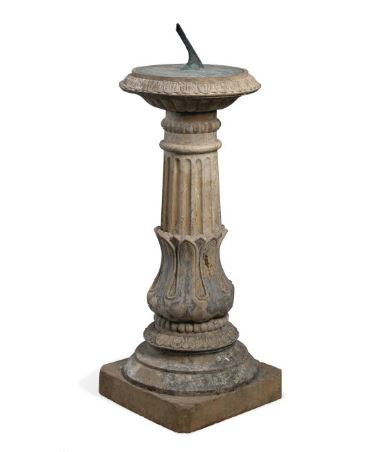