Bartonshill Brick Company, Bargeddie, Glasgow. (Note – SBH – I am uncertain as to exactly when the brickworks were started but from the info below it appears to have been c. 1898).

Below – 1897 – Bartonshill No 1 Pit is the location of the Bartonshill Brickworks. They are not marked on this map but they are marked at this location in 1910 as disused brickworks. 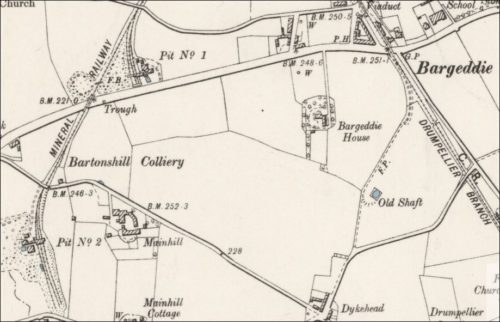 23/09/1899 – Airdrie and Coatbridge Advertiser – Valuation Court – Bartonshill Brick Company asked that the valuation of £150 on their works should be deleted. Mr McLeish, writer, Glasgow. supported the appeal, which involved a legal question which is under appeal presently as to there being no lease, the terms of which are fixed, and as to brickworks being entitled to exemption as the subjects used are for the treatment of minerals. The appeal was dismissed and a case taken for appeal.

10/07/1901 – Kirkintilloch Herald – Bishopbriggs Brick Company. Intimation was ordered by the First Division of the Court of Session on Thursday of a petition by the Bisbopbriggs Brick Company (Limited) and John W. Gourlay, C.A, Glasgow, liquidator thereof, in which a supervision order is asked for. The company was incorporated in June 1897, with a capital of £6000 divided into £1 shares, of which 5000 shares were in issue and were fully paid up. The company was unsuccessful in its trading, and dividends have never been paid to shareholders. All the capital of the company has been expended, and sums obtained on loan from the bank and from certain shareholders from time to time have also been spent. The company is insolvent and its liabilities to its creditors largely exceed its assets. In these circumstances, resolutions were passed by the shareholders approving the proposal that the company should be wound up voluntarily but in order to prevent preferences being obtained by certain creditors, the liquidator considered that it was desirable that liquidation should be placed under the supervision of the Court.

22/11/1902 – Airdrie and Coatbridge Advertiser – Brick kiln lodger – On Monday at Airdrie J.P Court John Murphy, miner, of no fixed residence. was charged with lying in a brick kiln at Bartonshill Brickworks, on Monday, 17th November, without the permission of the owner. On pleading guilty the accused was fined 7s 6d or five days.

16/01/1904 – Airdrie and Coatbridge Advertiser – Brick kiln sleepers – At Airdrie J.P. Court on Monday, Samuel Gray, William Burns, William McGillivery, and James McGuire, all tramps, labourers, were charged with lodging within a brick kiln at Bartonshill Brickworks on Sunday morning without the consent of the owner. They all pled guilty and were fined 7s 6d or five days each.

10/10/1907 – The Edinburgh Gazette – Notice of dissolution. The copartnery of Bartonshill Brick Company, brick manufacturers, Bargeddie, of which the subscribers were the sole partners, has been dissolved as from and after the date hereof. All parties having claims against said Company are requested to lodge the same with McLeish, Johnston and Oliphant, Writers, 197 St. Vincent Street, Glasgow, Agents for the said Company, within fourteen days from the date hereof, and all parties indebted to the said Company are requested to make payment to the said Agents within said period. John T Pettigrew.

31/10/1908 – Airdrie and Coatbridge Advertiser – Painful accident. On Monday forenoon a little girl named Georgina Pope, six years of age, daughter of Francis Pope, miner, Rhinds Row, Baillieston met with a nasty accident while playing at the end of the haulage rope on Mainhill Farm, Baillieston belonging to the Bishopbriggs Brick Company Limited. Her right leg was jammed between the haulage rope, which was in motion, and the terminus wheel, and she sustained a large flesh wound near the ankle. She was carried home and attended by Dr Gibson, who ordered her removal to the Glasgow Royal Infirmary. 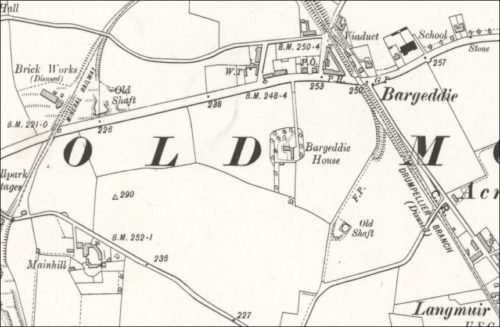 Many thanks to Elisabeth Piskolti from Switzerland. Elisabeth’s great grandfather was John Pettigrew. Elisabeth states:-

John Twaddle Pettigrew – Bartonshill Brick Company
John Twaddle Pettigrew was born 11 April 1856 in Drumgelloch, Lanarkshire, Scotland, he was the eldest son of Robert Pettigrew.  In the 1881 census, John Pettigrew’s occupation was a colliery bookkeeper and on the birth records of his five daughters, his occupation was listed as a clerk, ironwork clerk, works clerk, engineering bookkeeper, and secretary of work. It would appear that he purchased the Bartonshill Brick Company sometime after 1895 as in the 1901 Census his occupation is given as brick manufacturer.  He sold the company in 1907 before immigrating, with his family, to New Zealand in December 1907. He died in New Zealand on the 29 May 1928 having retired as managing director of Thomas Brown Ltd, a company involved with the coal industry.