June 1899 – The British Clay Worker – A young woman employed as a brickmaker by John Nimmo & Sons, Armadale, Scotland was admitted to the Royal Infirmary suffering from severe general injuries, received through the fall upon her of a brick wall in a kiln while following her employment. She lies in a serious condition.

23/09/1899 – Airdrie and Coatbridge Advertiser –  Serious accident – At South Broadrigg Brickwork, Blackridge, on Thursday afternoon, Hugh Maxwell, about 22, while in the act of oiling the teethed wheels of the brickmaking machine, got caught by the clothes and dragged in such a way as to sustain severe injuries about the lower part of the body. Dr Anderson found Maxwell in a critical state, no hope being entertained for his recovery. He is the son of Mr James Maxwell, general manager to the company.

26/07/1901 – Linlithgowshire Gazette – Chimney stalk struck by lightning. On Saturday evening about seven o’clock, just when the thunderstorm was at its height, a chimney stalk, belonging to Messrs John Nimmo & Sons, Westrig, and tenanted by Messrs Robert Muir & Co., brickmakers, Armadale, was struck by lightning, which started at the top and stripped the bricks on one side right down to bottom, a distance of 120 feet, causing considerable damage. The steeplejack says that it is the most curious thing of the kind he has ever seen, and he has had a photograph taken. 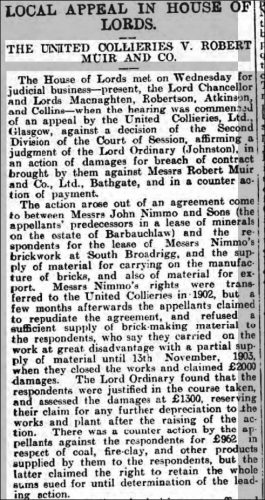 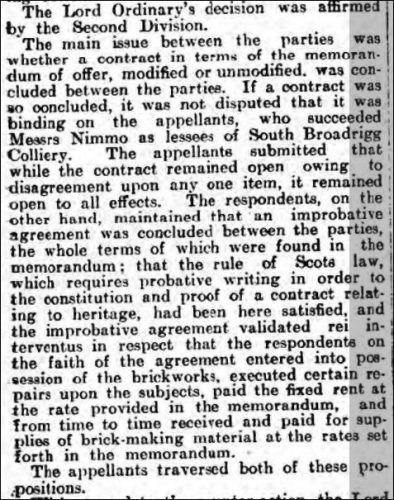 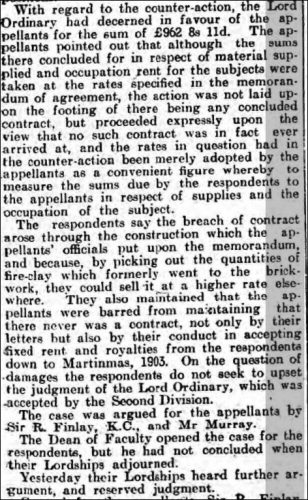 Below – 22/05/1908 – Linlithgowshire Gazette – Theft of brass bushes from South Broadrigg Brick Works which had been closed for some time. 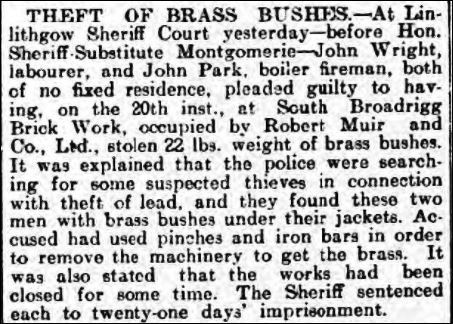 10/07/1908 – Linlithgowshire Gazette – After a long drawn out lawsuit that ended in the House of Lords between United Collieries Company and Messrs Robert Muir and Company Limited, brickmakers, over the terms of the original agreement between Messrs Nimmo, the original owners of South Broadrigg Brickworks and Messrs Muir, in which Messrs Muir won, the works were restarted on Monday.

Below – 18/09/1908 – Linlithgowshire Gazette –  Machinery damaged by a man who had been dismissed from the South Broadrigg Brickworks. 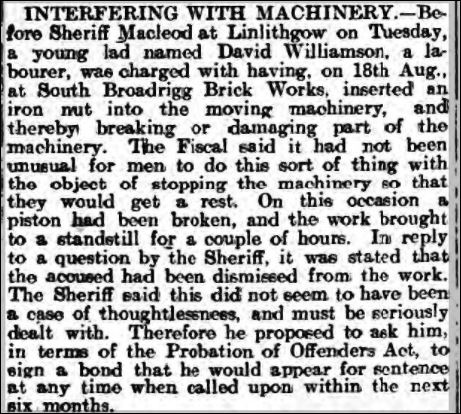 08/01/1909 – Linlithgowshire Gazette –  Our County in 1908 … The foundries and brickworks are not so busy as usual and could do with a great deal more work. Messrs Robert Muir & Co, owners of Armadale, Barbauchlaw and Boghead Brickworks having been at law with the United Collieries Company regarding their lease of South Broadrigg brick works had their case settled in their favour in the House of Lords early in the year and resumed operations at the works on the 4th July. 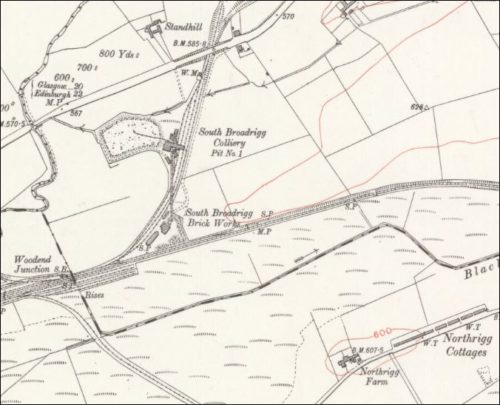 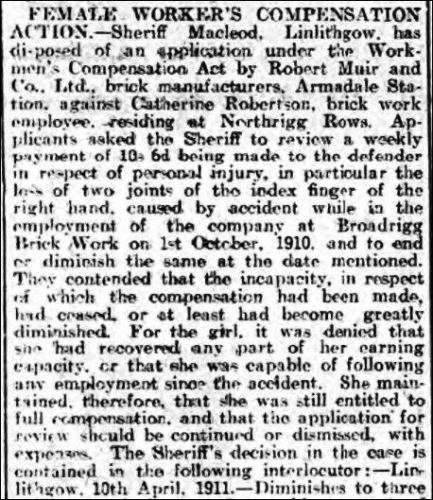 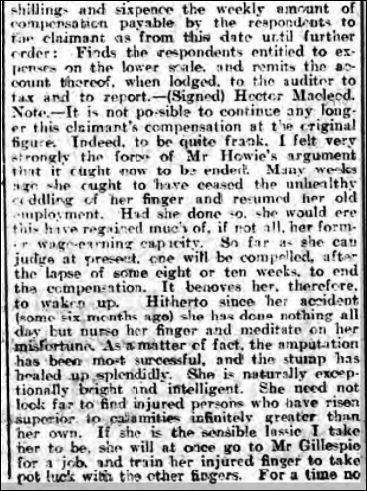