30/05/1882 – Glasgow Herald – Fatal accident. Yesterday morning shortly before eight o’clock, a young man named Fergus Freil, a labourer, who had only that morning started work at Kipps Brickworks met with an accident which terminated fatally. He had been engaged holing the clay at the face of the quarry when a mass of several tons came away upon him and buried him all except his feet. He was speedily dug out by some of his companions but he only appeared to give a faint breath or two and was dead before Dr Wilson from Coatbridge reached the spot. Freil was unmarried.
07/03/1885 – Lanarkshire Upper Ward Examiner – Messrs Hugh Symington and Sons, Kipps Quarries and Brickworks, Coatbridge pay their subscription of £2 2s to the St Andrews Ambulance Association.
(1889 – The 1985 publication ‘A survey of Scottish brickmarks’ suggests that Jonathon Hyslop was the owner or operator up until 1889 but from the information here it appears Hugh Symington operated the works prior to 1889).
Below – 1886 – Advert – Hugh Symington & Sons, Kipps Quarries and Brickworks, Coatbridge.

1893 – 1896 – Kipps Brickworks, Coatbridge. Hugh Symington and Sons.
09/04/1896 – Dundee Courier – Accident in Kipps Brickworks – On Tuesday a man named John Gorman, residing at Gartsherrie, while employed at the clay mill in Kipps Brickworks, Coatbridge, was seriously injured. It is not known exactly how he came by his injuries but is supposed he had reached down to pick out a stone, and losing his balance fell between two grinding wheels on the perforated bottom. He suffering from concussion of the brain and internal injuries.
14/11/1896 – Airdrie and Coatbridge Advertiser – Maggie McVeary, 22, brickworker, residing in Palacecraig Rowse, met with an accident while engaged at a brickpressing machine in the Kipps Brickworks, the property of Messrs H. Symington & Sons, on Thursday. Her hand had in some way become entangled in the machinery and before she could be relieved part of the thumb was severed. Dr Matthew Kenney, an assistant to Dr Cordiner, was in attendance and ordered her removal home in a cab.
Below – 1897 – Kipps Brickworks. Not present on the 1859 map and marked as disused on the 1910 map) 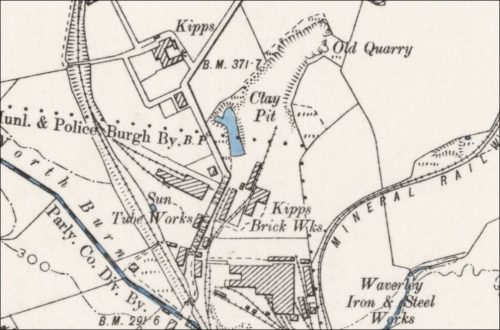 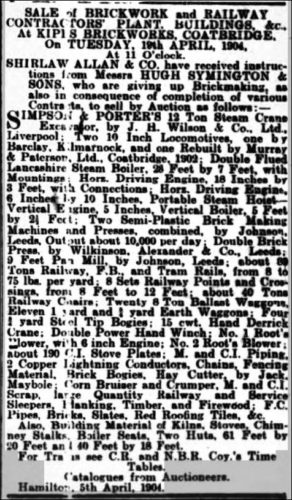 25/02/1909 – The Scotsman – Article regarding a serious accident when a wall fell on top of 4 men. One man killed and 3 injured  … A squad of men had been engaged all day digging a drain near Kipps Brickworks owned by Hugh Symington and Sons … (Fatal accident enquiry – 27/03/1909 – Airdrie and Coatbridge Advertiser).
> 1928 – The 1985 publication ‘A survey of Scottish brickmarks’ suggests that D K and H Symington were the owners or operators of the works.
It is unknown as to when the works closed.
Tagged with: Hugh Symington, Kipps, Sweethills