Bonnymuir Brick and Tile Works, Bonnybridge. Established prior to 1867. It is possible that G Turnbull & Co operated this site in conjunction with the Woodlea Brickworks at one time Falkirk Archives.

Below – 1839 – The advert below infers that George Turnbull & Co were established at the Bonnymuir Works in 1839. 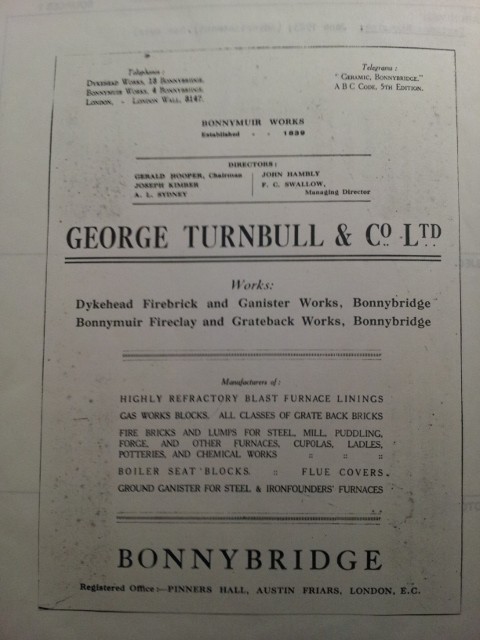 04/12/1851 – Falkirk Herald – On Monday morning, on the arrival of the workmen at the Bonnymuir Brick and Tile Work, the fire-brick stove was found to on fire. Owing to the calmness of the air, the fire was easily subdued before reaching any other portion of the buildings, the damage being confined entirely to that part of the work, which, happily, insured. 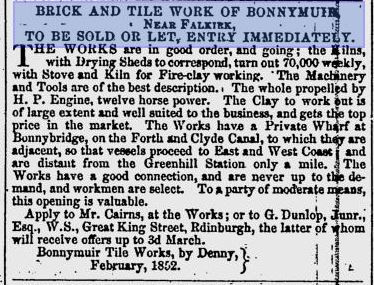 1855 – Margaret Donald and her husband Alexander Cairns, once manager of Malcolm Cockburns Gowanbank Brickworks, were living in Melbourne Australia but still owned the Bonnymuir works which were managed by George Turnbull.

1875 – By this date, Alexander Cairns had sold the Bonnymuir Works to Alexander Duthie of Ruthrieston. George Turnbull was still the tenant.

1880 – It is believed that George Turnbull bought the Bonnymuir Works at this time. It was described locally as a Brickworks and Bone Mill. Bones from the local slaughterhouses were calcined in the kilns then ground up into a bonemeal fertiliser.

27/08/1887 – Falkirk Herald – Lamentable Blasting Accident.— On Monday, a man named Charles Robertson, residing Broad Street, Denny, was engaged blasting in the clay pit connected with the Bonnymuir Brick Works, Bonnybridge (Messrs Griffiths & Company), an unjammed charge of 7 lbs. of powder suddenly exploded, with the result that both Robertson’s eyes were destroyed, and he has been rendered blind. Both his arms were also much burned and his left one was broken, and he was likewise injured about the body. It would appear that Robertson was engaged in preparing the charge when it is supposed that a spark from his lamp caused the explosion. The poor man was removed to his home and was attended to by Dr Benny. Robertson lies in a painful and dangerous state. He is about fifty years of age and has wife three children depending upon him.

1889 – George Turnbull dies and his business is taken over by Margaret and Janet Dougall who employ Henry Bruce to manage the Bonnymuir Works. Robert Dougall also joins this partnership. 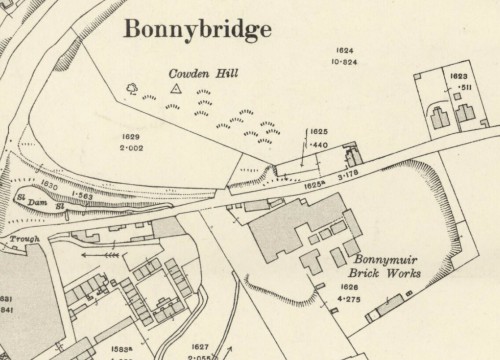 The works never became profitable and she eventually sold them to marry and emigrated to Australia. The site was later taken over by George Turnbull & Co.

The works stood on a Millstone Grit bed of clay and had their own mine just to the south of the works. When owned by George Turnbull, together with the Bonnymuir Tile Works they produced blast furnace linings, gas works blocks, grate back bricks, fire bricks, furnace blocks, cupola’s, ladles, boiler seat blocks, flue covers and ground ganister.

16/02/1924 – Falkirk Herald – An outbreak of fire occurred on Wednesday morning at Sunnybrae Terrace, the property of Messrs George Turnbull &  Co., Ltd, Bonnymuir Brickworks. The fire originated through one of the chimneys in the tenement catching fire, and the flames, in turn, caught the weatherboard at the gable and spread to the roof. The Bonnybridge Foundry Fire Brigade was immediately summoned and succeeded in extinguishing the flames before much material damage was done.

04/09/1926 – Falkirk Herald – On the occasion of her leaving the employ of Messrs George Turnbull & Co., Ltd., Bonnymuir Brickworks, to be married, Miss Bessie Dempster has been presented with a handsome mahogany timepiece, suitably inscribed, from her fellow-workers in the office and the employees of the firm. Mr Thomas Easton, a commercial manager, presided over the gathering, and the gift was handed over by Mr Wm. McClusky, works manager. Mr Easton, on behalf of the recipient, suitably replied.

14/03/1931 – Falkirk Herald – Brickwork employees entertained – Last Friday evening the directors of Messrs George Turnbull & Co., Ltd., entertained the employees of Bonnymuir and Dykehead Brickworks to dinner and dance in the Masonic Hall. After the company had partaken of a splendid dinner, which was daintily served by the catering staff of the local Co-operative Society, Ltd., Mr F. C. Swallow, managing director of the firm, extended welcome to the guests and expressed the hope that the evening would prove an enjoyable one for all present. Mr J, F. Cameron then asked Mr Swallow to convey to his co-directors the thanks of the guests for their kindness on this further occasion. Thereafter the tables were removed, and a concert party, composed entirely of employees from both works, submitted a very enjoyable programme. A vote of thanks to the artistes was heartily given on the call of Mr Swallow and neatly replied to by Mr William Boak. Mr William McLuskie paid a similar compliment to Mr Swallow for the capable way he had presided over the gathering. The hall was then cleared for dancing, which was carried on until an appropriate hour. The music was supplied by Mr Jack Shearer’s Ramblers dance band, that created a good impression upon their first appearance in the village last week, while extra numbers were tastefully played by Mrs J. Walker, who also acted accompanist the concert. The duties of M.C. were ably and jointly fulfilled by Messrs William McLuskie and J. Pirrie

15/11/1941 – Falkirk Herald – Three elderly men—James Sinclair, Patrick Ward and Peter Fitch — All in custody, appeared separately before Hon. Sheriff- Substitute James Allan at Falkirk Sheriff Court on Thursday and pleaded guilty to charges of having, on November 12, at Bonnymuir Brick Works, Bonnyside Road, Bonnybridge, occupied by the Glenboig Union Fireclay Co., Ltd., lodged in a kiln without the permission of the owners. Sinclair admitted four previous convictions, while Ward and Fitch each admitted three previous convictions. Mr A. G. Anderson, Procurator Fiscal, said these men were not only a nuisance to the owners of the brickworks, but were a danger to themselves. They were each sentenced to 21 days’ imprisonment

18/06/1955 – Falkirk Herald – At lunch break on Monday, Mr William Boak brickworks manager, Bonnybridge Foundry, was met by the employees in the department and presented with a carved oak musical cigarette box and also a necklace for Mrs Boak, on the occasion of their silver wedding. Alexander Forsyth, under foreman, in handing over the gifts expressed the good wishes of those present. Mr Boak suitably replied. (Note – SBH – Although Mr Boak is referred to on this page at the entry dated 14/03/1931, I am uncertain if this reference is for the Bonnymuir and Dykehead Works or perhaps he has now moved to the Bonnybridge Silica and Fireclay  Works?)

1960 – The Bonnymuir Works continued to make grate backs and baby bricks after WW2 but they were closed in 1960.