08/07/1899 – Airdrie and Coatbridge Advertiser – On Wednesday morning, Thos Duffis, labourer, employed at the Stripeside Brickworks was badly crushed by an iron wheel falling upon him. He was removed to the Cottage Hospital, where his injuries were attended to. One of Duffis’ legs was badly fractured at the ankle.

23/09/1905 – Airdrie and Coatbridge Advertiser – Denny –  About six o’clock yesterday morning Martin Hill, slater, Denny, was found by the Stripeside Brickworks watchman lying on the Stoneywood Branch Railway, near to the Stripeside Pit, in an insensible condition. He was removed to Denny Cottage Hospital, where it was ascertained that his injuries are most serious. Hill’s skull is laid almost open over the left eye, and he is not expected to recover. How he came by his injuries is not yet known.

(Note – SBH – Could Stripeside Brickworks be another name for Herbertshire Brickworks?)

Below – 1913 – Herbertshire Brickworks, Denny. (Herbertshire Colliery is depicted on the 1896 map but not the brickworks) 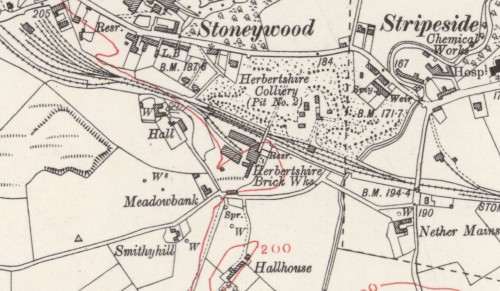