1825 – William Stephens in his ‘The story of Inverkeithing and Rosyth” states that James McVicar was working the Inverkeithing fireclay prior to 1825.

1837 – James McVicar – Firebrick Maker, Inverkeithing. (Note – SBH – It is likely but not certain that the references below to Mr McVicar’s brickworks may well be the early occupier of the Inverkeithing Fire Clay and Brick Co site – can anyone clarify?)

Below – 15/11/1843 – The Scotsman – The sequestrated Estate of James McVicar, brick manufacturer in Inverkeithing. 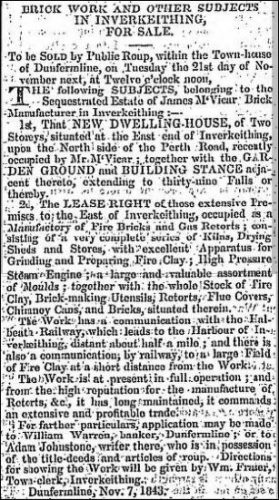 22/05/1844 – Invoice from the Inverkeithing Brickworks occupied by Fraser and Sanderson. 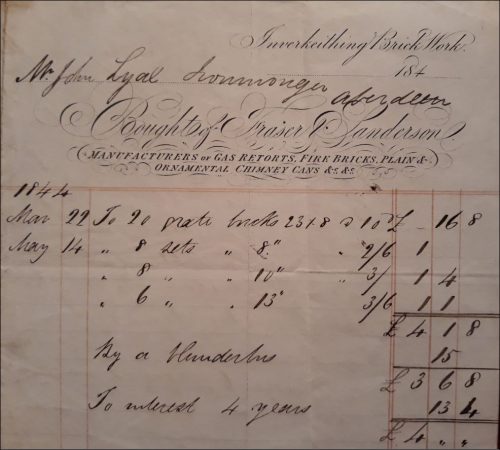 05/09/1844 – Fife Herald – Inverkeithing  – Accident – some days ago while some labourers were engaged in a clay quarry near this town, belonging to Messrs Fraser and Sanderson’s Brickwork, a portion of the quarry gave way and buried under it a man of the name McCallum. When the clay was removed and the man taken out, it was found that both his legs were broken, but we are happy to learn he is in a fair way of recovery. He has a family but they are all grown up.

09/12/1846 – Aberdeen Press and Journal  … Tender for fire bricks. The tenders for supplying 75,000 bricks for the harbour works were next opened. The Aberdeen Brick and Tile Company offered to supply 1/2 of the quantity required at 36s per 1000. Messrs A & W Nicol’s tender was also for 1/2 of the quantity at the same price. Both of these tenders were accepted. There was also on the table an offers by Messrs Fraser and Sanderson, Invekeithing to supply any fire bricks that might be needed for the harbour at the rate of 63s per 1000. Mr Abernethy stated that fire bricks would be very useful in some portions of the works on account of their durability. Permission was granted for him to get as many as might be required.

25/09/1851 – Fife Herald – Dunfermline Horticultural Show … Among the articles forwarded to the exhibition, we might have noticed the large and varied collection of vases, requisite to the ornament of the flower-garden, forwarded by Messrs Fraser and Sanderson, Inverkeithing … 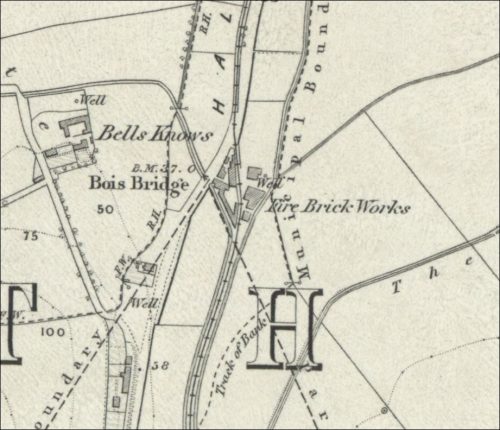 1859 – Kenneth W Sanderson states Fraser and Sanderson operated the works from 1844 to 1859 when Frazer became the sole owner.

29/12/1866 – Dunfermline Saturday Press – Deaths – At Bombay on 20th ult, of typhoid fever, Mr David Moodie of the Bank of India, second son of Mr Peter Moodie, brickworks, Inverkeithing in the 26th year of his age. Deeply regretted by all who knew him.

1877 –  Kenneth W Sanderson states  John Ross took over the works and renamed the works the Inverkeithing Fireclay and Brick Company.

01/11/1877 – Falkirk Herald – an article on trade in Inverkeithing … The other industries of the town also passed recently through a period of probation, but they are now in a fair way of regaining and extending their previous prestige. The fire brick and tile works, and the rope and salt works are one and all in active operation …

Below – 1882 – Advert for Fire Clay and Brick Co, Inverkeithing.

Below  – 17/08/1882 – Dundee Evening Telegraph  –  Abandonment of a Montrose schooner – Board of Trade enquiry. While on a voyage from Inverkeithing to London with a cargo of firebricks and fireclay the ‘Tyne’ took on water and was abandoned by the crew off Whitby, Yorkshire.

18/10/1886 – Edinburgh Evening News – Council Divided against itself – Proof was led before Sheriff Gillespie, Dunfermline Sheriff Court Saturday, in case in which the Town Council of the Burgh Inverkeithing sued John Rose, one of the members the council, for £10 4s, the sum alleged to be due rent for the use of a railway crossing which leads to defender’s brickwork. The defence was that an arrangement was entered into 1877, with John Hoy, then Provost of the Burgh, and Bailie Auld (who is now Provost), which the defender or other tenants of the brickwork were to pay £3 per year for five years as a share of the expense of the crossing. After the expiry of five years, it was alleged, the defender was to have a right of servitude. Ex-Provost Hoy and Provost Auld gave evidence in support defender’s contention, and the Sheriff made avizandum of the case.

10/11/1888 – Dunfermline Saturday Press – Fire Clay Works for sale – Upset price reduced -To be Sold by Public Roup, within St Margaret’s Hall, Dunfermline, on Tuesday, 20th November 1888, at Two o’clock Afternoon. The Inverkeithing Fire-Clay Works, as occupied by the Inverkeithing Fire Clay and Brick Company, and commodious Cottage adjoining, known as St Mary’s. The Works are on the Great North Road.  The Dunfermline and Queensferry and Inverkeithing and Burnt Island Sections of the North British Railway pass within a few yards, and there is a Lye into the Works, which also connects them with Inverkeithing Harbour.  Fire-clay abounds in the neighbourhood.  The Works and their connections occupy about Two Acres.  There is a serviceable Engine of 12 H.P., and other fixtures, included in the Sale. Reduced Upset Price, £700; Feu-duty, £2, 15s.  For further particulars, apply to John Ross, Solicitor, Dunfermline.

23/11/1889 – Dundee Peoples Journal – For sale – Surplus stock for the season of fireclay &c. Goods, bricks, pipes, covers, retorts &c, 32 tons thereby at Inverkeithing Fireclay Works. Lowest quotations are given. N.B As trade prices are being raised orders should be arranged for at once. 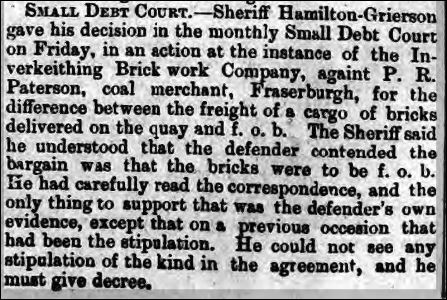 Below – 1893 – Advert for Fire Clay and Brick Co, Inverkeithing.

1894 –  Kenneth W Sanderson states that the Street Brothers took over the works from John Ross and that they closed soon after.

06/04/1895 – The Scotsman – Fire clay works and cottage for sale.  To be sold by public roup within St Margarets Hall, Dunfermline on Tuesday 09/04/1895 at 2 o’clock. The Inverkeithing Fire Clay Works as occupied by the Inverkeithing Fire Clay and Brick Company and commodious cottage adjoining known as St Marys. The works are on the Great North Road. The Dunfermline and Queensferry and Inverkeithing and Burntisland sections of the North British Railway pass within a few yards and there is a lye into the works which connects them with Inverkeithing Harbour. Fire clay abounds in the neighbourhood. The works and their connections occupy about 2 acres. There is a serviceable engine of 12 hp and other fixtures included in the sale. Feu duty is £2 4s 9d. To ensure a sale the property is to be exposed at the low upset price of £1000. 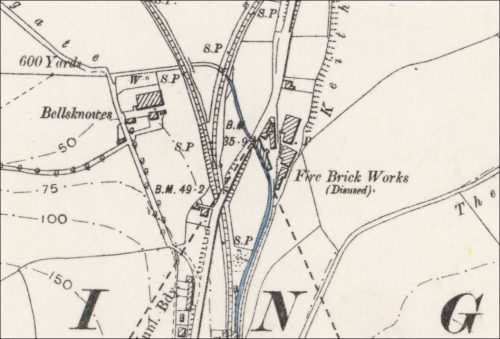 19/08/1901 – Dundee Evening Telegraph –  New Works at Inverkeithing – Very extensive additions both in the way of building and the laying down of new plant has just been made to the Inverkeithing Works of Messrs Street Brothers Ltd, extensions which will give employment to a large number of hands. The firm had its origins in 1837, their fire bricks work being at Kingseat Hill and at the site now occupied by the house of Mr Ness. The father of the Brothers Street was the first to make stock bricks in Scotland, at that time this class of brick commanding a much higher price than ordinary bricks.

The Townhill Brickworks was then opened and on the clay giving out there the Appin Brickworks on the Townhill Railway was started. 3 years ago the firm was formed into a Limited Liability Company incorporating with it Cruicks Terra Cotta Works, Inverkeithing. At these latter works the company have carried on the manufacture of teapots, vases and terracotta ware but owing to the extension of the bricklaying business of the Company under the superintendence of Mr James Street, new buildings and new brick making plant have been added to the Inverkeithing Works which are situated at the south side of Inverkeithing Bay, nearly opposite St Davids shipping port for Fordel Coal and a short distance from the hamlet of Jamestown and the old salt pans at Inverkeithing.

The new building is 4 storeys in height, while the new brick making plant is capable of turning out 2o,000 bricks a day and gives employment to some 150 men. The clay is taken from Inverkeithing Bay by means of a barge and crane and on the shore, a 3-ton crane has been erected which lefts the clay to the upper stores of the building. The clay then passes through various processes, gradually finding its way to the patent duplex brick making and brick pressing machine. A new kiln on the Hoffman principle has been erected with 14 chambers each capable of containing 16,000 bricks. The Company have also a whinstone quarry at Inverkeithing in which they have introduced a stone breaking machine. The clay in Inverkeithing Bay has the reputation of being of very good quality for brick making. The new works are to be formally set in operation today.

06/06/1906 – Dundee Evening Telegraph – Fife Trade depression. Serious outlook –  For some considerable time, dullness has been experienced in connection with the brickmaking industry in the district of Dunfermline. The Appin Fireclay Works of Messrs Street Brothers were on Monday shut down, although it was  known for some time that this step was not unlikely. The brickworks at Inverkeithing carried on by the same firm have also been closed. About 100 men, it is stated, will be affected. The same dullness is being experienced at the Lochhead Brickworks, at which a number of men were recently paid off.

Below  – The following drainage tiles and support couplers were found during excavation work in a field near to the Inverkeithing Fire Clay Works and may or may not have been manufactured there. 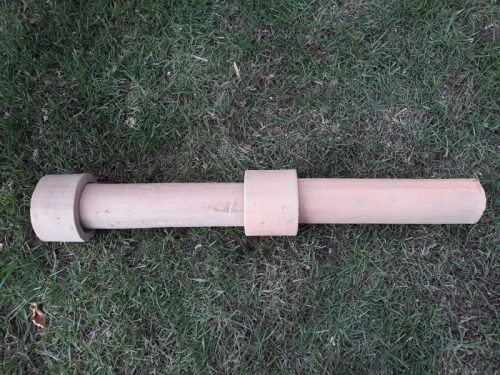 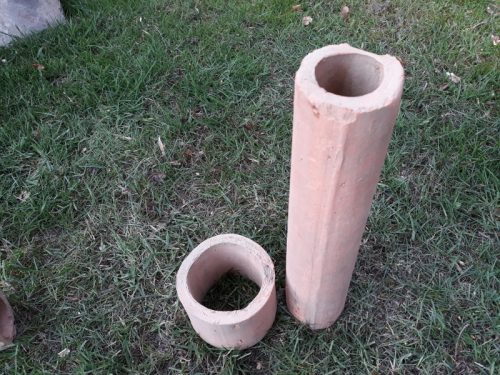 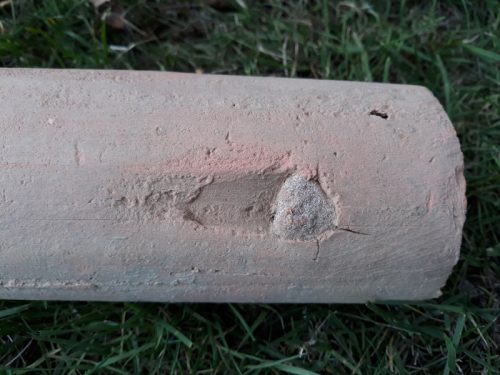 The following thoughts are put forward by Ian Suddaby.

Thinking about the Inverkeithing Fire Brick Works, but first a quick mention of the light railway or tramway that served it. This ran for a distance of at least 4 miles, from the Queen Pit and the Albert Pit at Halbeath in the north via stone quarries and a connection with the main (Edinburgh to Perth) line to the fire brick works and on to a distillery, foundry and port in Inverkeithing. So there’s an integrated railway system linking these varied industries and supplying their raw materials. There was no quarry or mine associated with the brickworks so it must have obtained the fireclay from either the Queen/Albert Pits or elsewhere via the mainline railway. Note the ‘Patent Slip’ in the second (1854) map image of Inverkeithing, that’s an interesting point for dating the bricks.
The Scottish Brick History website shows that there were four main owners of the Inverkeithing brickworks, John McVicar from c.1825-1843, Fraser & Sanderson from 1844-1859, Fraser on his own 1859-1877 and Peter Ross 1877-1888.
Looking at the three bricks, you’d think that the F&S INVERKEITHING bricks were made between 1844 and 1859 and the PATENT bricks either 1859-1877 or 1877-1888. However, the appearance of ‘Patent Slip’ on the 1854 survey map suggests to me either that Patent bricks were being unloaded there or that it was owned by a company using that name. Thus, F&S INVERKEITHING and PATENT bricks might have been produced at the same time. The similarity in the letters certainly suggests they’re related.
The F&S bricks are very rare, I’ve only ever found them in Inverkeithing whereas the PATENT bricks are much more widespread along both sides of the Firth of Forth.
We’ve still never found any bricks made by McVicar or Ross. McVicar might be a bit early for named brick production but you’d have expected Peter Ross to have added his name to his products. 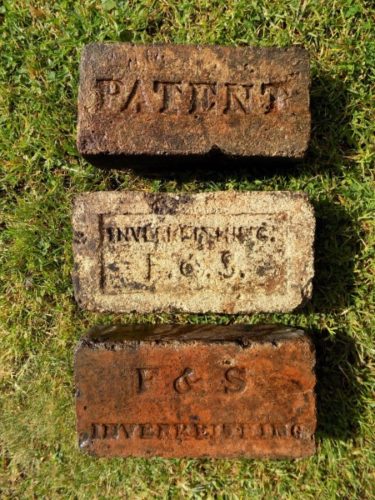