Below – 10/05/1828 – Edinburgh Evening Courant – (Note – SBH – Could this be a reference to an early brickworks at Townhill or are they referencing the Kingseat Hill Brickworks).

Estate and extensive coal mines in the West of Ayrshire for sale. To be sold by public roup, within the Royal Exchange Coffeehouse, Edinburgh, on Wednesday the 25th day of June 1828, at two o’clock afternoon, The whole landed property belonging to the Town of Dunfermline with the valuable coal, mines and woods. The Lands consist of the different farms of Higholm Muir, Cockhall, Lilliehill, Cairncubie, I.ochbank, Kingseat and Bellyeoman, including the Dawsdendale and Dicks Park; and farther, of the Pendicles at Townhill; the Brickwork; the Parks called Headwell, Planting and Dawsdendales, the Leys, the Pendicle and houses possessed by William Millar Gardiner, Easter and Western Town Green; and lastly, Hallyblood Acres including the washing house and bleaching green …

1839 – 1840 –  Reference to the Townhill Works being established upwards of 60 years prior to 1899 by the grandfather of the Street Brothers. 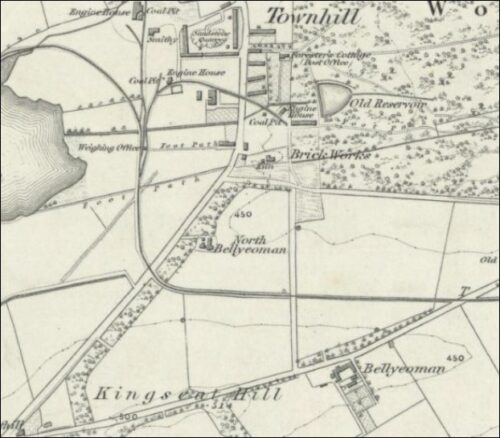 12/01/1880 – Dundee Courier – … since the Townhill Coal Company settled down in the village (Townhill Village) some sixteen years ago, the place has rapidly increased and is improved in many ways. Year by year the tenants of the colliery have increased the area of their field, giving to the Burgh a large and annually increasing revenue. At the entrance to the village, there is the brickwork of Mr Richard Strut, (Street?) who has been four years located in the village.

29/03/1899 – Dundee Courier – Fatal Accident in Fife. Patrick Connor, 72 years of age. labourer, No. 2 Second Row, Townhill, was fatally injured at Messrs Street Brothers’ Fireclay Work, Townhill on Monday night. While he was assisting to fill a cart at a place where some excavations had been going on, a mass of fireclay, which had been partly undermined, came away upon him. On the old man being extricated, he did not seem to be much injured, but on being conveyed home he died within an hour.