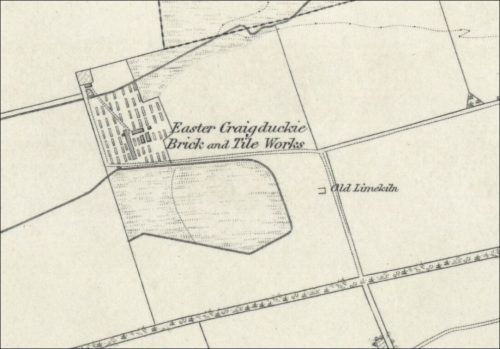 14/11/1856 – Edinburgh Gazette – West of Fife mineral railway extension – As also a Branch Railway from a point on the first mentioned proposed Branch or Extension Railway,
at or near to Easter Craigduckie Brick and Tile Works, in the said Parish of Dunfermline, and terminating in a Field or Enclosure on the Farm of Braehead, commonly called Cuffaboutmeadow, in the Parish of Beath.

11/06/1864 – Dunfermline Saturday Press – Lands of Easter Craigduckie, Fife for sale … The lands have been in the natural possession of the proprietor, the late, Henry Flockhart Esq.The minerals on the lands are considered valuable. A brick and tile works has for many years been upon the property …