“My dad, who lived in Longstone from his birth in 1927 until 1962, used to ‘chum‘ Sandy Preston as he delivered bricks that were made in the Longstone’s Brickworks.  The brickworks aren’t there now of course.  The Bus Depot stands where the brickworks used to be.

Hailes Quarry was right behind the brickworks back then.  The quarry was actually a part of the brickworks and the quarry managers’ house was just a few yards from our house in the cottages.

Later, his house was turned into a sort of midwives‘ station where mothers from the village went to see the midwife and get powdered milk and wee bottles of orange juice for their bairns.

I don’t know what it is now, but it’s the sandstone house, just beside the roundabout opposite the bus depot.”  Source – Robert Laird, Longstone, Edinburgh.

1898 – The 1985 publication ‘A survey of Scottish brickmarks’ suggests the works were opened around this time.

29/05/1901 – Edinburgh Evening News – Quarry and Brick Manager wanted. The present Manager having resigned. Applications are invited for the situation of Manager of Hailes Quarry and Brickwork near Slateford, Mid Lothian. Applicants should be experienced in the working of a quarry and brickwork and in the management of different classes of workmen. Apply to Messrs Tods, Murray and Jamieson, W.S 66 Queen Street, Edinburgh.

17/01/1910 – The Scotsman – Letters to the editor … The Hailes case is apposite in another sense, in the respect that the company not only hold the landed estate, which, they have used every means to develop—and which they would be penalised by the development duty, for not having developed but they work the well-known Hailes Quarry, and run a brickwork, which most usefully supplies building material to the district, and employs a large number of men … 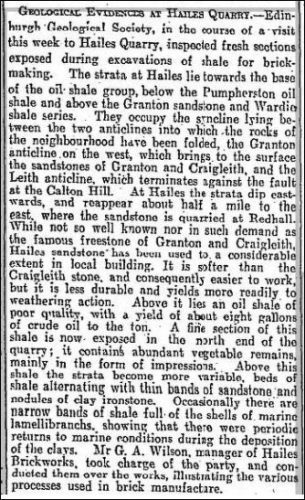 03/12/1931 – The Scotsman – A nine-year-old schoolboy, Thomas Messer, who lived at 70 Longstone Road, Edinburgh, has died in Edinburgh Royal Infirmary. While playing at the entrance of the Hailes Brickworks, Longstone Road, he had his left leg run over by a motor lorry laden with bricks.