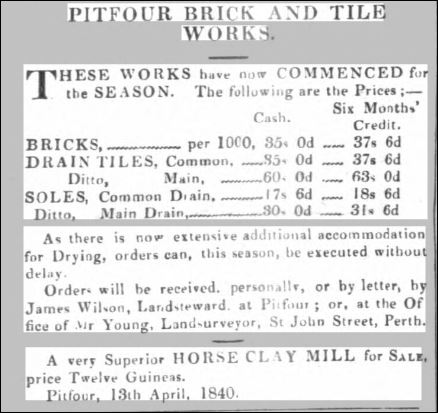 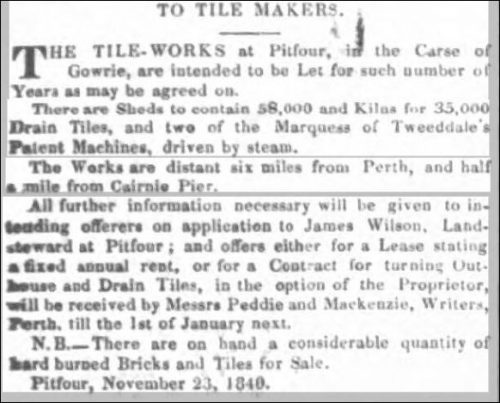 14/06/1842 – Northern Warder and General Advertiser – Errol – Dahlia growers would do well to inspect a simple yet ingenious instrument made of clay, and then burned at the Pitfour Tileworks, for protecting that beautiful plant from snails. It is, we believe, the invention of Mr Ambrose, schoolmaster, St Madoes, and is used by him in his extensive dahlia garden.

16/12/1847 – Perthshire Advertiser – Tile and Brick Work to be let and sale of machinery. The Work at Pitfour, Carse of Gowrie with the brick, tile and pipe making machinery and a steam engine for working same. The work is within a short distance of the Glencarse Station of the Dundee and Perth Railway. Apply to Mr James Wilson, Land Steward, Pitfour who will receive offers till 7th January 1848 or if preferred the whole machinery will be sold. Pitfour 14/12/1847.

02/01/1850 – Perthshire Constitutional & Journal – Pitfour Tilework. Reduction in the price of drain and roofing tiles. The stock on hand is for sale at a reduction of ten per cent. Pitfour Tilework. 11/12/1849. 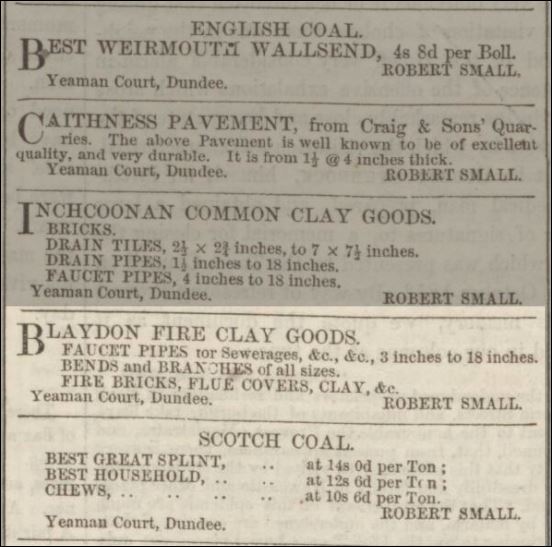 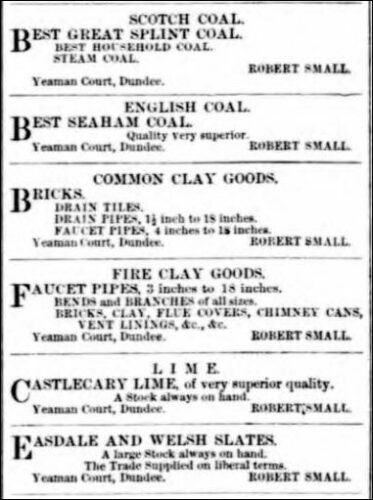 28/12/1865 – Perthshire Advertiser – To brick and tile makers – Contractors wanted for making a quantity of bricks and tiles on the estate of Pitfour in the Carse of Gowrie. Apply to Messrs MacKenzie and Dickson, Solicitors. 21/12/1865

27/05/1871 – Dundee Peoples Journal – It is understood that the contractors for the Tay Bridge have arranged for obtaining a large quantity of bricks from Messrs Robert Small & Co, brick and tile manufacturers, Dundee. 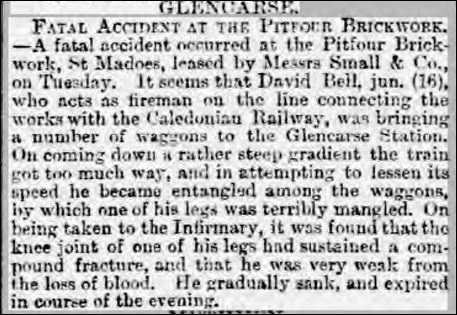 29/07/1879 – Dundee Advertiser – Highland Society Show at Perth – … Messrs Robert Small & Co., Yeaman Shore, who are exhibitors at Stand No. 143 of drain tiles, roofing tiles, common clay, circular and side arch bricks. The pressed bricks, though 5s* per thousand dearer, have a finer finish, are more durable, and are immeasurably superior to ordinary bricks. It is of the pressed bricks that the Tay Bridge piers are constructed.

29/10/1879 – Dundee Evening Telegraph – Licensing Court – An application for the renewal to a license for a public house in Leetown, Errol was opposed by Sir John Richardson and he considered the house was unnecessary and that it was a great temptation to the people employed at the Pitfour Brickwork.

01/04/1882 – Dundee Advertiser – Brick burners and setters. Wanted one of each (young men) for a brickwork at Port Elizabeth, South Africa. Passage paid. Apply with a certificate of character and ability to Wm. Gilmour, Pitfour Brick and Tile Works, Glencarse, near Perth. (Note – SBH – Does anyone know if there was a direct relationship between the Pitfour Brickworks and a brickworks in South Africa?).

30/06/1888 – Dundee Weekly News – Dundee Mechanical Society – On Saturday afternoon a party of the Dundee Mechanical Society visited Messrs Robert Small & Co.’s Pitfour Brick and Tile Works, Glencarse.  They were met at the station by Mr Gilmour, their manager, who had a conveyance in waiting to take them to the works.  He accompanied them through the whole works and gave them a detailed description of the various departments.  The machinery was set in motion for the purpose of showing with what precision and speed bricks and pipes were turned out, each machine being able to produce from 10,000 to 12,000 per day.  They were next shown through the large kiln, the particular method of firing this kiln being specially noticed. The ovens and outside dykes were next examined. A visit was also paid to the clay hill, where Mr Gilmour explained to them its extent and working.  It may be mentioned that all the bricks in the old and new Tay Bridges were supplied by Messrs R. Small & Co.  On the motion of Mr William Bruce Mair, their President, the members accorded a hearty vote of thanks to Messrs R. Small & Co., and also to Mr Gilmour, the manager, for their kindness, after which the party left for home highly pleased with their visit. 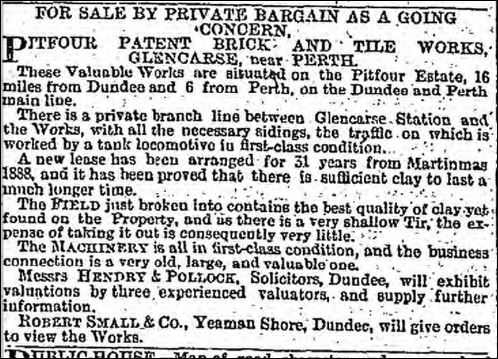 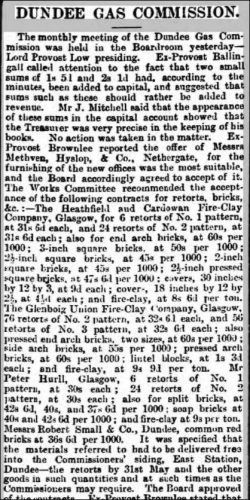 02/12/1895 – Dundee Advertiser – Mr T W Grieg of Glencarse addressed a meeting of the electors in the West Carse Hall, Glencarse on Friday evening. Mr William Gilmour of Pitfour Brick and Tile Works presided and there was a large attendance. 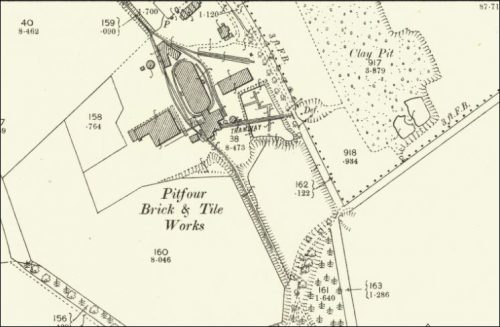 30/03/1899 – Dundee Courier – Fatal result of an accident – The accident which took overtook Robert Gilmour, Jun, Brickworks, Glencarse about a month ago has had a fatal termination, the unfortunate fellow having succumbed to his injuries in Perth Infirmary. Gilmour received his injuries through falling over a wooden gangway at the works leading to the top of the kiln.

Below – Sept 1899 – The British Clay Worker – Death of William Gilmour. 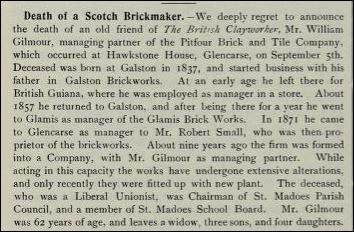 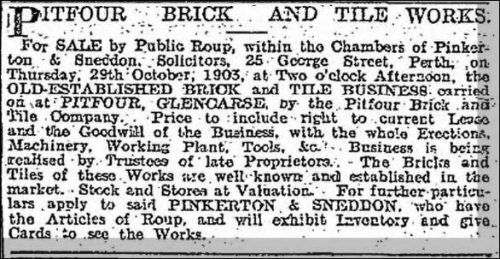 24/09/1904 – Aberdeen Press and Journal – The Pitfour Brick and Tile Company, 25 George Street, Perth to take over the business of brick and tile manufacturers carried on by the Pitfour Brick Company of Glencarse, by Perth. 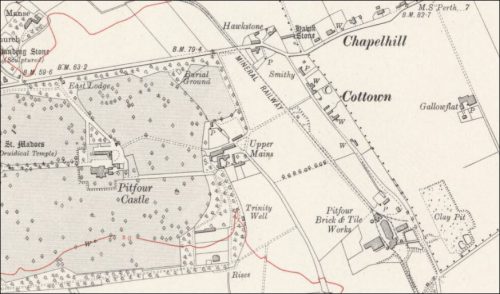 20/06/1913 – The Edinburgh Gazette – Notice is hereby given that a Petition has been presented to the First Division of the Court of Session (Mr Adam, Clerk) by Mrs Helen Adamson or Swan, sometime residing at 5 Teviot Place, Edinburgh, afterwards in Montreal, Canada, and presently in Scotland, with the consent of her husband, Andrew Don Swan, Civil Engineer. Montreal, Canada, for winding up The Pitfour Brick and Tile Company Limited; upon which Petition the following Deliverance has been pronounced:— Edinburgh, 18th June 1913.—The Lords appoint the Petition to be intimated on the walls and in the minute book in common form, and to be served upon the Pitfour Brick and Tile Company Limited, and upon Charles McNicoll and Alexander Gowrie Gilmour, mentioned in the petition: also appoint notice of the petition to be advertised in the Edinburgh Gazette, and once in each of the Scotsman and Dundee Advertiser newspapers and allow the said Pitfour Brick and Tile Company and all persons having an interest to lodge answers within eight days after such intimation, service, and advertisement. (Sgd.) Dunedin, I.P.D. Cowan & Stewart, Agents for Petitioner 10 Castle Street, Edinburgh 20/06/1913.

09/01/1914 – Edinburgh Gazette – Further legal details regarding the liquidation (under supervision) of The Pitfour Brick and Tile Company Limited. 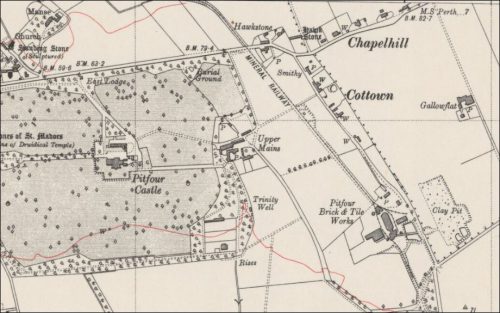