Info from Pete Higgins – This brickyard seems to have been in use well before the 1950s. It appears in the Post Office Directory for 1936-7 (pp614 and 1145), and bricks from the yard have been found in demolition material from a wartime RAF base at Alness, in use until about 1948. 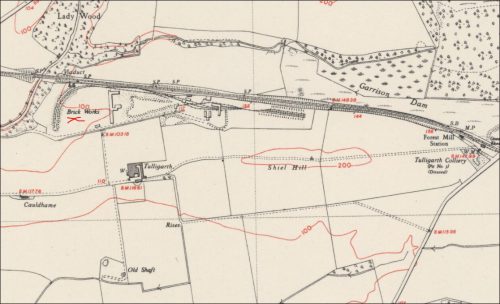 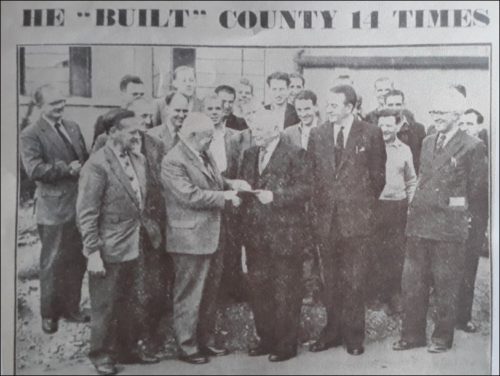 The man who made so many bricks – he can look along to Clackmannan and say “most of the new houses there were built out of “Brucefield bricks” has a puzzle connected with his trade. In the front garden, there is a brick marked “Clackmannan 1851,” which was dug up on the Tower Brae. He would like to know where it was made.

Mr Boyle in his long working life, can certainly say he has been making his mark in the world. For a thousand years to come and more people will be able to look at the name Brucefield or Cherryton on a brick, and so see something in which he had a part.

Since Mr John Boyle came to the wee county in 1925 he has been responsible for the making of 160,000,000 bricks, enough to house 400,000 people in 3-apartment council houses; or to rebuild all the council houses in the County fourteen times; now he has retired, but if anyone offers him the job of designing and building another brickwork he will have a go at it, 81 years old or not. It’s been a long time since Mr Boyle has turned his hand to the making of bricks; he was more or less born into the trade, for his father and his relations in Portobello district were all employed in
the clay trade. Some made flower pots, some made stone lemonade bottles which had not then been replaced by glass.

He was eleven years old when he set to work standing the “green” bricks so that they did not stick to the floor of the kiln, then he went on to the actual making of the bricks, then onto the machines, then onto the burning of them. Always he had the idea that he would make his own kiln to his own design and he was to live to see this dream fulfilled several times.

He first used the clay that came from Grangewood Colliery in Northumberland, there, the kilns were designed to stand the very high temperatures necessary for firing the linings of steel furnaces. They were completely successful but Mr Boyle was not quite so successful in obtaining a fair return for his brains and his work.

Mr and Mrs Boyle and their family left the smallholding they had in Northumberland, with its memories grey and gay like the memory of the day the turkey stole the margarine, and Mr Boyle had to eat his toast dry – and came back to Scotland, to the Wee County. Here he set to work to make the Brucefield Brickworks. He had literally to make it from the ground up; he and the workers under him made the bricks from the clay from the mine and built them up into piles 10,000 at a time and fired them where they stood, then built them into the kilns in which to fire other bricks.

When he started work in the County, a big part of his job was finding a market for the bricks they made and Brucefield bricks competed very successfully with bricks from the established works
over in Fife. Some of them went into the Gaumont Cinema after they had been tested successfully against their rivals. It’s worth mentioning that all the brickworks he built to his own specifications are working to this day completely satisfactorily, and that if he got the chance of building another he would make no more than minor alterations. By his skill, he saved his employers a considerable sum of money, since it was much cheaper to build the kilns than to buy the bricks and have them built. In all his working life he never had an accident, even when they were building the 125-foot chimney of the Brucefield Works, you need a high chimney in order to get a powerful draught to remove the heavy moisture-laden hot air from the bricks being fired.

In a place of honour on the walls of their cottage in Clackmannan is the certificate, Mr Boyle received from the Coal Board on Thursday, it reads “For long and meritorious service, presented to John Boyle in recognition and appreciation of 70 years loyal and efficient service of the coal industry and the country. It is signed by J.Bowman, Chairman of the Board, and R. W. Parker, Chairman of the Divisional Board.

But Mrs Boyle thinks the finest thing of all is the bouquet of pink and white carnations she was presented with; as a keen gardener herself, she appreciates the perfection of the blooms. Their front garden, the first one in the row in Kennet as you come into it from Alloa direction is a small masterpiece; and their back garden of Kennet is getting on for the size of a small field is planted in
flowering shrubs and small trees.

Below – 1976 – Alloa Advertiser  – Advert for an engineer at the Cherryton Brick Company, 22 Mill Street, Tillicoultry. Photo forwarded by Andrew Wood. 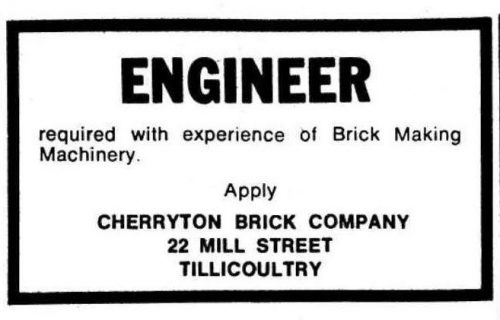 Below – 26/11/1976 – Alloa Advertiser – Cherryton Brickworks closes due to ‘shoddy management’ Order books were full at the time.

Many thanks to Andrew Wood for much of the information that follows.

The Minto Brick Company.  – The Cherryton Brickwork closed in 1976 but it still occupied the premises in 1978.  James Minto acquired the works in 1979 and went into receivership in 1980. James Minto and the previous owner lived in Tillicoultry and used the same office in the town that was owned by the Clackmannan Fuel Supply Company. 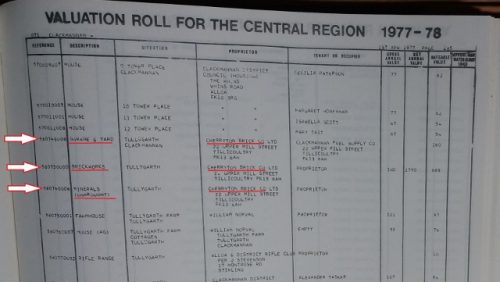 14/01/1977 – Edinburgh Gazette – Cherryton Brick Company Limited, Creditors Voluntary Winding Up – At an Extraordinary General Meeting of the Members of the above Company duly convened and held within 22 Mill Street, Tillicoultry, on Thursday, 6th January 1977 the following Extraordinary Resolution was duly passed: — ” That it has been proved to the satisfaction of this
Meeting that the Company cannot by reason of its liabilities continue its business and that it is advisable to wind up the same, and, accordingly, that the company be wound up
voluntarily.” At the subsequent Meeting of Creditors duly convened and held on the same date within 22 Mill Street, Tillicoultry, the Voluntary Winding Up was confirmed with the appointment
of Frank Hutchison Mycroft, Chartered Accountant, 25 Abercromby Place, Edinburgh, as Liquidator with a Committee of Inspection. T. Stevenson, Chairman. 6th January 1977.

Below – 1978 – 1979 – Valuation rolls. From the Valuation Rolls – 1978 – 1979 – James Minto lived at 2 Kirktoun Gardens, Tillicoultry. When Minto became the proprietor of the brickwork site he did not acquire the adjacent the mineral deposits which had previously been owned by the Cherryton Brickwork Ltd., Tullygarth.

1980 – The Minto registered address was 166 Buchannan Street, Glasgow.  D McNaught & Co. a firm of liquidators and I think the official liquidator was R H Armour.

14/03/1980 – Edinburgh Gazette – Cherryton Brick Company Limited  (In Liquidation) – Notice is hereby given pursuant to Section 300 of the Companies Act 1948, that Final Meetings of Members and Creditors of the above Company will be held within 25 Abercromby Place. Edinburgh EH3 6QS, on Wednesday, 23rd April 1980 at 11.30 a.m. and 11.45 a.m., respectively, for the purpose of receiving the Liquidator’s Report showing how the winding-up of the Company has been conducted and to hear any explanations which may be given by the Liquidator. Frank H. Mycroft, C.A., Liquidator 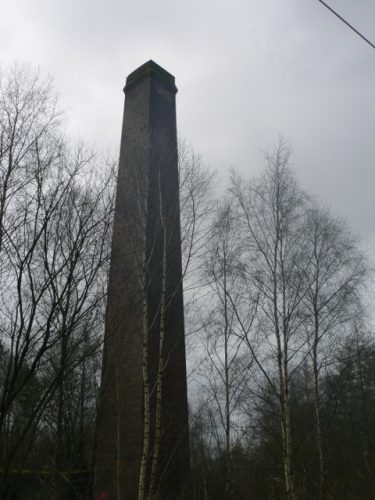 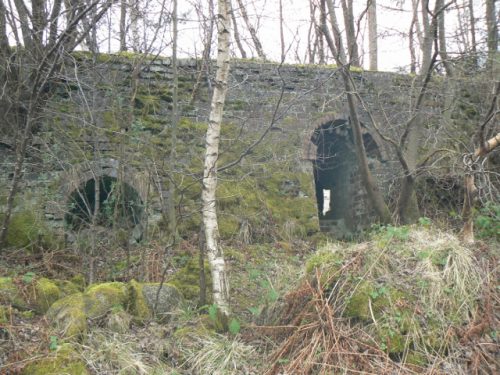 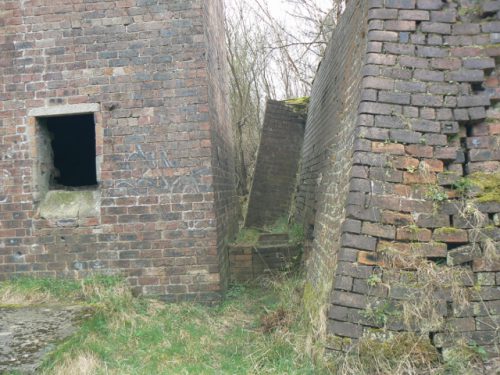 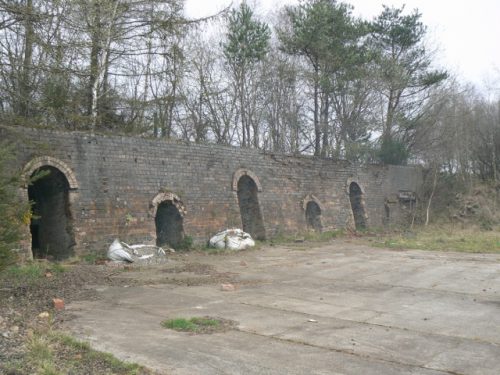 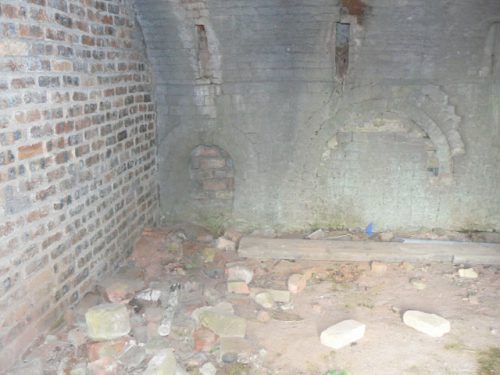 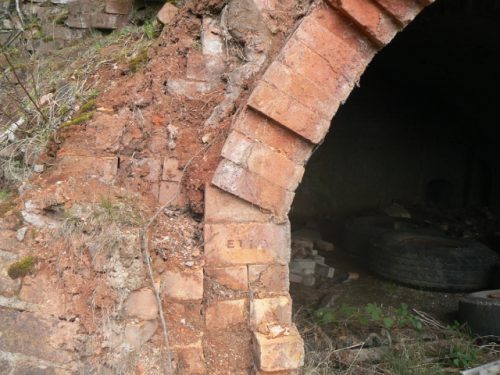 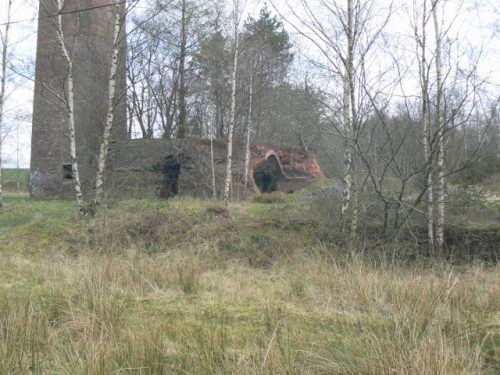 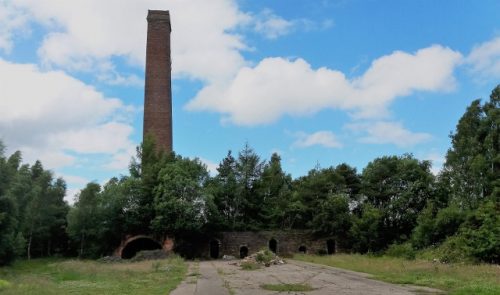 Below – Sizes are in metres. 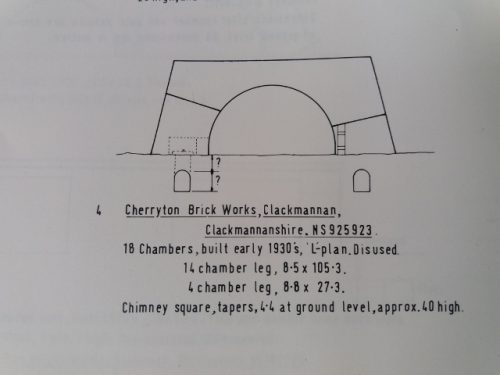 Below – A photo showing the ruins of the longest section of the ‘L’ shaped kiln at Cherryton. Source of the photo is unknown as it was forwarded by a fellow enthusiast. 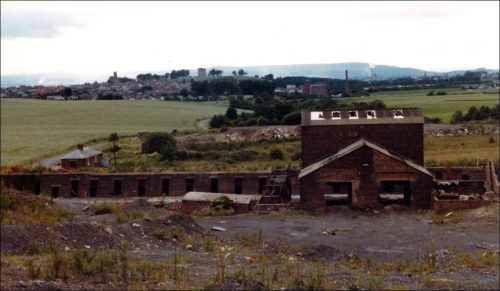 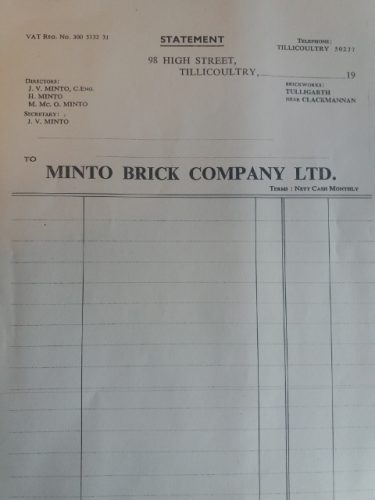