1865 – 1871 – ScotlandsPlaces – Kinnoir Brick and Tile Works. This is an extensive brick & tile works having on an average 15 men employed at it. It is attached to Mr MacKay’s croft on the Farm of Bridges. There is a large bed of good clay close to the works. Houses, sheds, kiln &c. are all in good repair. It is situated about three miles North East of the town of Huntly and is the property of His Grace the Duke of Richmond. 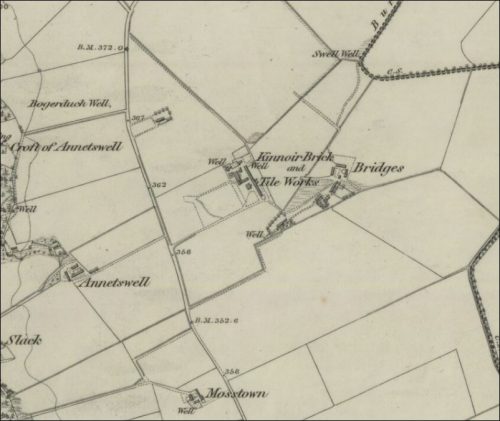 10/01/1880 – Aberdeen Peoples Journal – Sale of horses –  Three fine draught animals belonging to the Kinnoir Brick and Tile Company were exposed for sale by public auction on the Market Stance on Wednesday. There was large attendance intending purchasers, and bidding was animated. A strong horse, 5 years old, fetched £64; one do., 4 years old, was knocked out at £30 and a ten-year-old mare brought £28 5s. Mr Finlay was the auctioneer.

16/05/1911 – Aberdeen Press and Journal – Assault Kinnoir Tileworks – Richard Henry Dene, Englishman, employed at Kinnoir Tileworks, and lodging, along with his wife at 5 Mill Lane, Huntly, about midnight, on Saturday, was arrested and lodged in prison, on a charge of having seriously assaulted his wife by biting her on the neck and other parts of the body, and threatening to cut her throat with an open knife, held his band, and otherwise maltreating her to the effusion of blood, and also with committing a breach of the peace. The police, having doubts to the man’s sanity, had him medically examined yesterday morning, prior to the Police Court, which he was to have appeared. It is stated that the unfortunate man has been certified to be insane and that arrangements are being made to have him conveyed to the asylum. The affair caused considerable excitement and comment in the town, and many wild rumours were in circulation.

04/07/1913 – Event held to celebrate the retirement of a local farmer. Those in attendance included … Mr R Mackay, Kinnoir Brickworks … 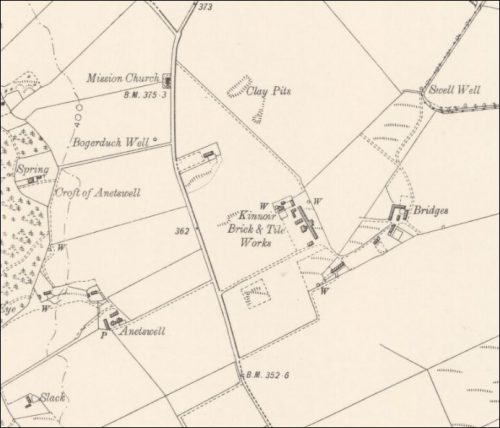 20/08/1914 – Aberdeen Press and Journal – Sudden death at Kinnoir – On afternoon. John (59), labourer, employed at the Kinnoir Tile works, while engaged the engine-room along with another man, dropped down suddenly and expired. It appears that while the deceased was lifting a lump of clay he suddenly fell down on the ground. His companions carried him to the open air when it was found that was dead. Dr Garson, Huntlv, was immediately summoned and found that the deceased was beyond medical aid. Tho doctor assigned the cause of death to heart failure. Deceased, who had been about 20 years in the employment Mr P. McKay at the tileworks, had been abroad in his earlier years and was employed for some in the teaching profession. He belonged to the  Kinnoir district and was unmarried. 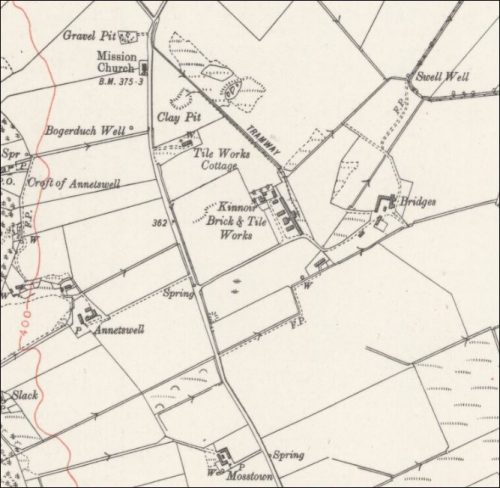 21/12/1944 – Aberdeen Weekly Journal – Married at Newtongerrie, Drumblade, on December 8, 1894, Mr and Mrs Wm Niven, Tileworks Cottage, Kinnoir, Huntly, have celebrated their golden wedding. For a number of years, Mr Niven was employed as a farm servant in the Huntly district until in 1914 he entered the service of Mr P. Mackay as a carter at Kinnoir Tileworks. In that capacity, he gave faithful service to the firm, and although retired from active work several years ago, he still lends a hand when occasion demands. Of a family of nine, six survive. There are nineteen grandchildren and one great-grandchild. On the occasion of the anniversary, Mr and Mrs Niven were made the recipients of a handsome gift from his employer and a wallet of treasury notes from their family and friends. They also received many messages of congratulation.