Canmore – Invernettie Brick and Tile Works, Peterhead – This brickworks operated from 1797 to post-1896; its site has been cleared.

1797 – There is a suggestion from a later article date 1897 that at that time the brickworks were over 100 years old.

Below – 15/05/1811 – Aberdeen Press and Journal – Estate to be sold – The lands of Meethill, being the eastern part of Invernettie … and there is a thriving brick and tile work on the property and excellent quarries … Proprietor Robert Gordon, younger, of Invernettie … (original advert? 13/02/1811) 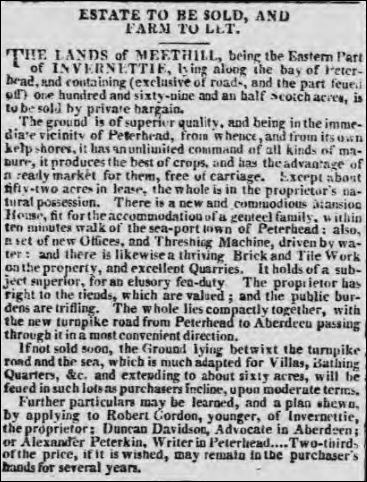 Below – 14/08/1811 – Aberdeen Press and Journal – Easter Whitehill of Invernettie for lease … with the liberty of making bricks, tiles and earthen-ware at a trifling expense … an application may be made to William Forbes, Merchant in Peterhead … 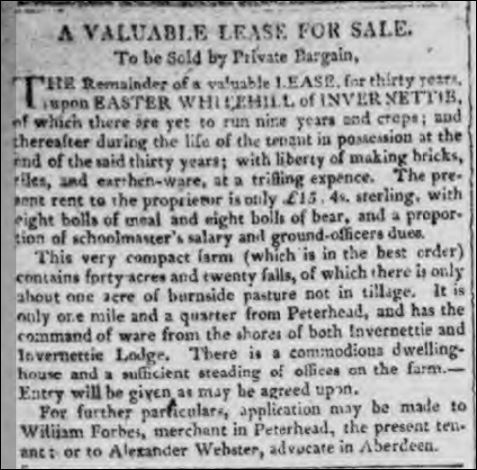 24/10/1851 – Montrose, Arbroath and Brechin Review – Fettercairn Farmers club … Chairman Sir John Stuart Forbes … Sir John exhibited also specimens of a very ingenious fluted brick and gutter tile for byre floors, invented and registered by Mr Forbes of the Invernettie Tilework, Peterhead; the object of which was to save litter, by having grooves only half-inch wide at the top, and widening below, running at intervals of five inches from half-way up the stall, and opening by corresponding notches into the gutter brick, on which the animal lies with much greater comfort than on boards, and a moderate portion of litter, which, in practice, is found to prevent the dung from closing up the grooves, lasts a great deal longer, being kept quite dry. These bricks, which can be sold in Aberdeen at 11s. 6d. per 10,  70 to 80 being sufficient to lay a double stall, have been much commended by the directors of the Highland and Agricultural Society. They excited much interest at the meeting and several of the members as well as the chairman, signified their intention of ordering some for trial immediately …

Below – 15/08/1855 – Aberdeen Press and Journal – Three-eights of Invernettie Brickwork for sale. 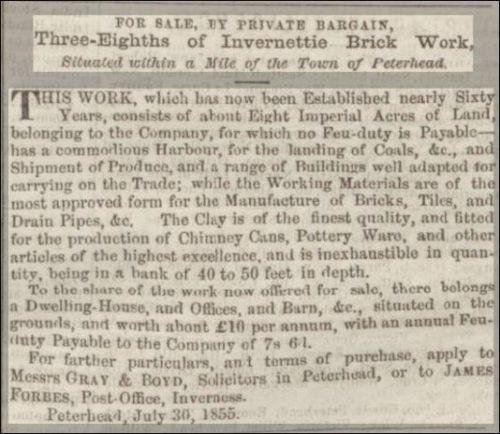 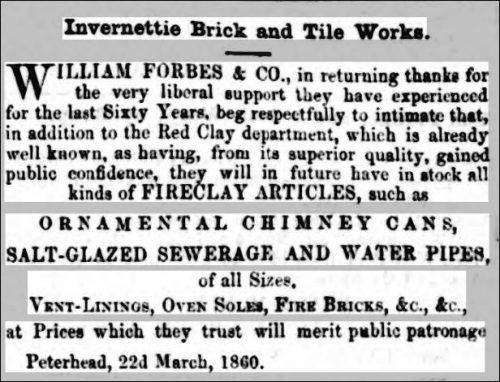 22/04/1862 – Banffshire Journal – Notice to millers and millwrights. Wm West, of the Pennan Quarries, begs to intimate that he has on hand a large assortment of millstones of excellent quality. It is but right that millers and millwrights know that there have been numbers of counterfeit stones that have injured the name of the unparalleled Pennan millstones. Parties in want of good stones will have them on moderate terms .on application to the following Agents:— Mr Robert  Kemp, No.60, Castle Street, Aberdeen. Messrs Wm. Forbes & Co., Brick and Tile Work, Invernettie, Peterhead. Mr Thomas Adam, Jun, Banff. Mr James Duncan, builder, Turriff and at the Mill Stone Quarries, Pennan, Wm. West, or John Grant, foreman the quarries.

12/09/1862 – Peterhead Sentinel – a meeting of tradesmen took place to discuss and complain about the income tax commissioners  … The following parties were thereafter named as a committee to draw up a memorial … James Yule Jun, manager, Invernettie Brickwork …

28/09/1866 – Buchan Observer – A ramble around the coast … On the left is the Invernettie brick and tile work, famed in Buchan for the excellence of the articles which it produces. The clay here is, however, of such a nature as requires a great deal of preparation, involving much labour and expense. Clay for the work such as pipes and tiles after being dug from the bank and carefully picked for stones, is put through a mill driven by a steam engine on the premises. This mill is composed of what might be called an iron drum, stuck roundabout with strong iron spikes, which revolve at a rapid rate, breaking the lumps of clay, and with the assistance of a stream of water always rushing in, reducing the hard material to a pulp. This pulp runs off to what is called a “puddle hole” when it lies in the same state as plaster when that is being prepared for use. The bottom of the metal case wherein the drum is inclosed is taken out at intervals, and as the stones lodge there while the good clay runs off, the two are thus separated by a simple and efficient process. The clay is allowed to settle in the puddle until the water comes to the top when that drained off by means of sluices, and the clay hardens up in the bottom. The clay in afterwards taken out in barrows, spread out to dry, and before it is fit for use has again to be saturated with water, and for the finer purposes to pass through other machines. All kind of pipes are made by machinery; almost the only articles made by hand are roof tiles and bricks. In making tiles two men always work in company and these will make about eleven hundred tiles per day. In this department, the men are paid by piece work. One man will make bricks at a much quicker rate than that named for tiles; he requires one man to fetch clay to the bench where he works, and two boys to carry the bricks away to be dried. Very rough material serves for making bricks, and the clay for this purpose passes through a mill driven by hand by means of as lever resembling a thrashing mill. The duties of a scavenger, the work of driving a mill such as that referred to and polishing stones by hand, seem the most prosaic employments to which labouring humanity is doomed. Leaving the brickwork we pass the new Artillery shooting range … 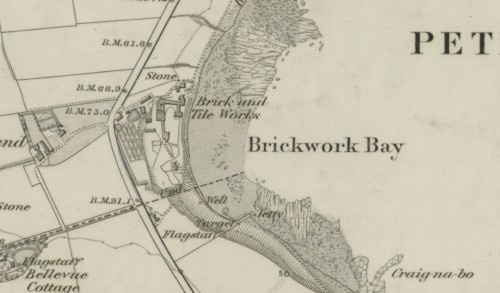 23/01/1879 – Aberdeen Press and Journal – … Death of William Mackie (98) … He also worked for over years the Invernettie Brick and Tyle Works, and when was no longer able for such manual toil became post runner, which office he held with acceptance for many years …

26/11/1879 – The Scotsman – Peterhead – Body found in kiln – Yesterday morning the body of a man was discovered lying on the bricks in a kiln at Invernettie Brickworks near Peterhead. The man has apparently about 35 years of age and the body was very much burned. The kiln is frequented by tramps as a comfortable sleeping place and it is supposed that this man had taken up his quarters on the top of one of the brick piles and had been suffocated. The letters A.L were tattooed on his left arm.

13/01/1880 – Buchan Observer – To let, Invernettie Brick and Tile Works. These old established works are to be let with entry at Whitsunday 1880. Apply to A. Arbuthnot, accountant, 60 Broad Street, Peterhead.

04/06/1880 – Buchan Observer – Business intimation. – Andrew Craig, who has been for 47 years in the employment of brews William Forbes & Co., Invernettie Brickworks, begs to intimate to Masons, Contractors, and others in Peterhead and surrounding district, that he has, in company with his sons, commenced business as brick and tile makers at the old established works at Invernettie, and that the firm will be carried on under the designation of Andrew Craig & Sons. By bestowing every care and attention to all orders, and by turning out the best class of goods at a moderate charge, the firm expects to merit a continuation of the liberal patronage so long bestowed on their predecessors. Invernettie Brick and Tile Works, Peterhead, 2nd June 1880.

Below – 21/11/1882 – Aberdeen Press and Journal –  Drying shed damaged during a storm at Invernettie Brickworks. 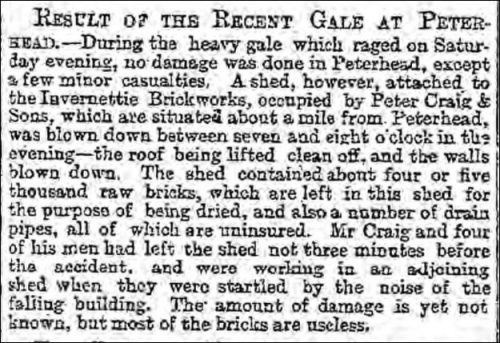 12/02/1889 – Peterhead Sentinel – Lost on Friday night, near the Governor’s House,  Convict Prison, a broad-brimmed American hat. Finder will be rewarded on leaving the same either at the Sentinel Office, or Fyfe’s, Invernettie Brickwork. (Fyfes?)

31/12/1895 – Buchan Observer – Keith Lodge No 56. Business: To accompany the remains of deceased Brother Andrew Craig, from the house at Invernettie Brickworks to the place of interment in Peterhead. Brethren from other Lodges in the Province are respectfully requested to attend. By order of the R. W.M.  – W. H. Leask, Secy. Peterhead, 30th Dec. 1895.

07/01/1896 – Buchan Observer – Peterhead Masonic funeral – The brethren of Keith Lodge ( no 56) headed by a band under the leadership of Brother Dimmer attended on Wednesday the funeral of the late Andrew Craig of the Invernettie Brickworks. The deceased was 76 years of age and joined the brotherhood in 1838.

07/01/1896 – Buchan Observer – Peterhead. Masonic funeral. The brethren of Keith Lodge (No. 56), headed by a band under the leadership of Brother Dimmer, attended on Wednesday the funeral of the late Andrew Craig, of the Invernettie Brickworks. The deceased was 76 years of age, and joined the brotherhood in 1838.

23/02/1897 – Buchan Observer – History of Peterhead – … Just outside the burgh boundaries between the South Turnpike and the sea, lies the old Invernettie Brickwork. Although strictly speaking not a Peterhead industry, some slight reference ought to be here made to it. In existence more than one hundred years ago we find it in the early years of the present century in the possession of Messrs Forbes & Co. It was then a large and flourishing concern, about 250,000 bricks and tiles were annually manufactured; and ships loaded at a private pier at its base, the traces of which may still be seen. Several very ingenious improvements in the manner of manufacturing were made by Mr Forbes, and it is said the pantiles manufacture were equal, if not superior, to those of the Dutch. The Fraserburgh water pipes were made at this brickwork. About forty years ago the proprietors’ of the business were Messrs Yule and Milne. The brickwork and its quarry are now little used, and the buildings are rapidly falling into decay …

25/03/1902 – Buchan Observer – Peterhead and it’s folk fifty years ago …  A lecture delivered by Mr David Scott, librarian, Peterhead and based mainly around the year 1856 – The lecturer went on to describe the old Invernettie Brickwork, then a thriving industry, with its handy little harbour and pier, and its ” shippie ” for carrying away the products of the works, the pier being, in those days a favourite resort of bathers. The occupant of the Brickwork House was Mr James Forbes, artist, whose home, was made, by a kindly wife and a family of brave sons and clever daughters, an enjoyable rendezvous for the intelligent men and women of Peterhead. Mr Forbes, the lecturer went on to say, had a particularly fatherly interest in his brother Willie Scott, who, he explained, was a good fellow and very fond of fun. On one occasion when Mr Forbes had been lecturing him, and after commending him on his cleverness, had advised him to stick more strictly to business. Willie retorted—” Mr Forbes, I’m nae sae clever as you an’ some folk think, I’ve only a faculty o’ persuadin’ ither folk to think it.” (laughter). 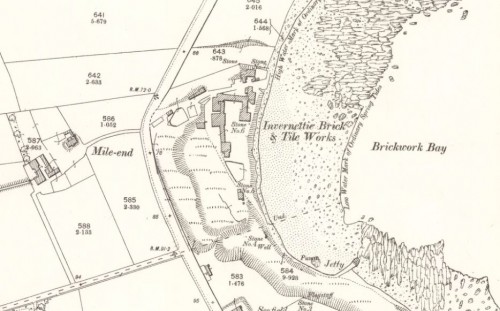 25/02/1936 – Aberdeen Press and Journal – Funeral of Alex Middleton, Milend, Peterhead … Mr Middleton, who was a native of New Aberdour, spent nearly all his life in Peterhead, where was a well-known and respected townsman. As a young man, he was employed at the Invernettie Brick and Tile Works, first with Messrs William Forbes and Co., later with Messrs Andrew Craig and Son …