06/04/1844 – Aberdeen Herald – Brick and tile maker wanted – A person thoroughly acquainted with the manufacture of brick and tiles is wanted just now as a foreman at Downiehills Works. Apply to James Arbuthnot. Downiehills by Peterhead.   04/04/1844. 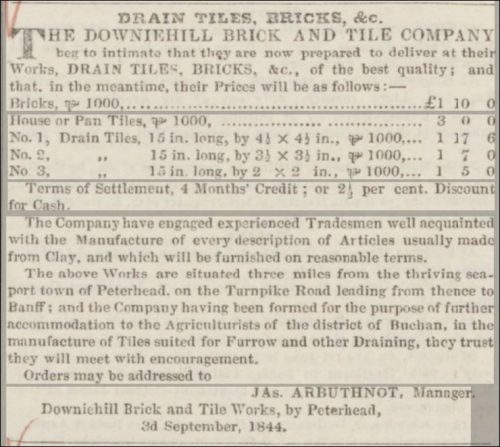 (James Arbuthnot of Umzinto Lodge, Natal. Born at Peterhead, Aberdeenshire, Scotland during 1816, died at Umzinto Lodge, Kelso District, Alexandra County, Natal on 4 May 1861 and is buried at the Humberdale Cemetery, Kelso. James was educated at Aberdeen College. He went on to farm at Buchan, Scotland and then, with his young family at Downie Hills, Peterhead where he founded a company manufacturing clay pipes, tiles and bricks. He and his family were Byrne settlers to Natal arriving from Liverpool aboard the Unicorn in Port Natal on 17 September 1850).

31/07/1866 –Banffshire Journal and General Advertiser – Downiehills Brick and Tile Works. John Mutch, who has been many years manager at the above Works begs to intimate to his agricultural friends and the Public that he has become purchaser thereof and trusts by assiduity and attention to business, to merit a continuance of those favours so liberally bestowed on his predecessors. J.M is now ready to deliver bricks, drain pipes, roof tiles etc. Price moderate. Downiehills by Peterhead July 1866. 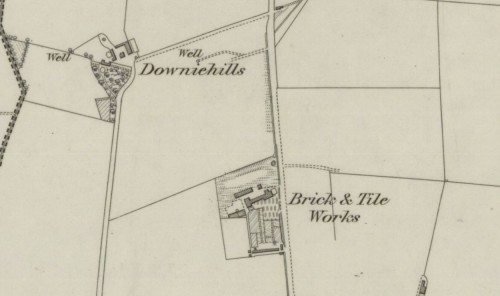 21/12/1880 – Buchan Observer – Article regarding a charge against the officers of the Xanthus. Witnesses called include – William Law Mutch, seaman, Downiehills, Peterhead and John Mutch, jun, brick and tile maker, Smiddyhill, Peterhead ( I believe John Mutch may have lived at Smiddyhill which is located just north of Downiehill brickworks)

23/05/1890 – Peterhead Sentinel – House of two apartments to let. Rent £3. Byre and stable could be had. Apply Downiehills Brickworks. 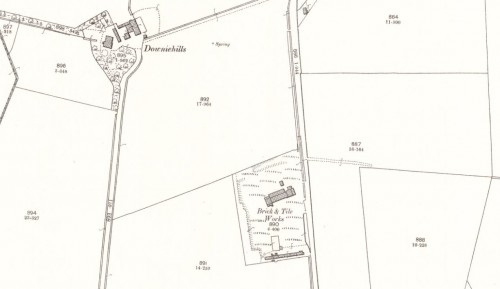 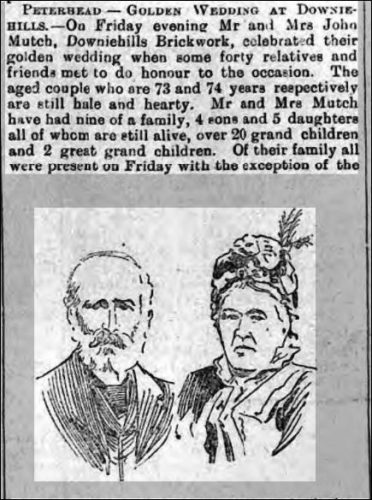 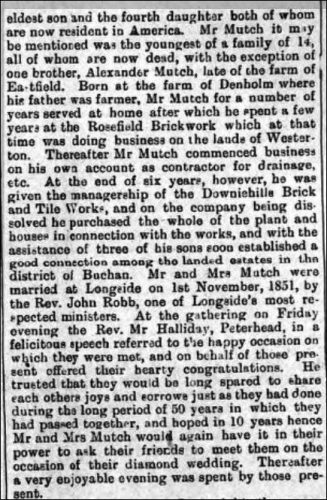 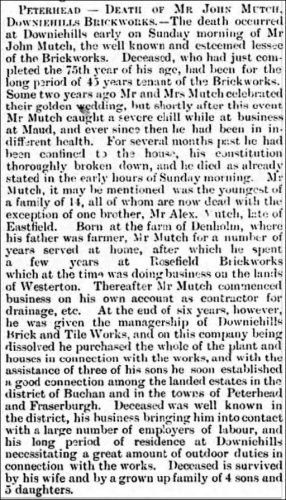 Below – 08/01/1907 – Buchan Observer – Downiehills Brick and Tile Works for sale – carried on for over half a century by Messrs John Mutch & Sons.

14/06/1909 – Aberdeen Press and Journal – Golden wedding at Peterhead – Mr Alexander Watt (73) and Mrs Watt … Have just celebrated their golden wedding … He was born at Denholm near Peterhead and in early life elected to follow the hard but healthy occupation of a ploughman and was engaged on several large farms throughout Aberdeenshire. Ultimately Mr Watt abandoned farm service and for 14 years was employed at the brick and tile works at Downiehills which were then under the management of the late Mr Mutch, his uncle …

Additional information – 23/06/1802 birth of Ann Fraser in Cruden, son of Andrew Fraser and Jean Walker. Andrew Fraser was the brother of the William Fraser who was the father of illegitimate William Fraser born in 1805. In 1835 she married William Mutch at Peterhead. In 1841 they are Dee Village, Oldmachar with 2 young children and William is a tilemaker. Can’t find them in 1851 but in 1861 they’re at Nigg, Kincardineshire at the Torry Farm Brickworks where William is a brickmaker. With them are two daughters, a grandson and 9-year-old lodger. They’re still there in 1871, with a granddaughter and two lodgers. By 1881 they’ve moved back to Peterhead and are at the Downiehills Brickwork Cottages, William formerly a brick maker. Ann is still at Downiehills in 1891, a widow and annuitant, living with her niece and various members of the extended Mutch family. All the men are brick makers. Ann Mutch nee Fraser died in 1893 at the age of 91, of old age, at Downiehills.