Below – 06/05/1868 – Aberdeen Press and Journal – Keith, Harriman & Watson intimate they have almost completed their new patent kiln and will be ready to supply bricks by the end of April. (Note  – it seems the kiln was not complete by the end of April as this advert appeared in May albeit it was first written on 20/03/1868) 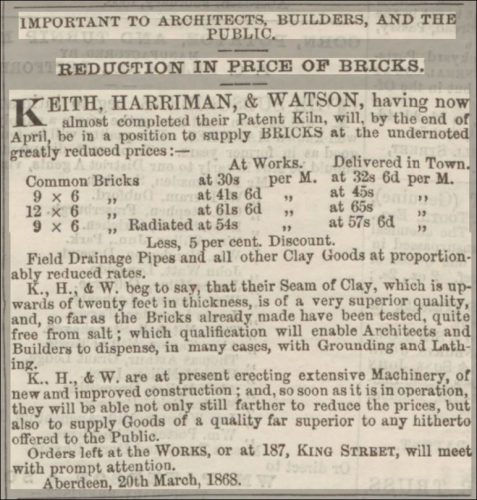 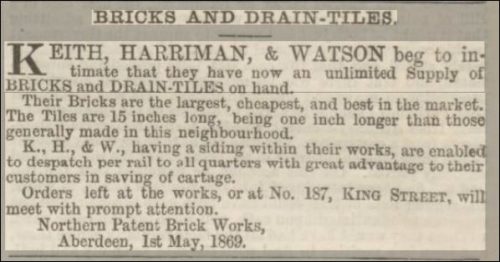 28/10/1881 – Aberdeen Press and Journal – Drainage materials to landed proprietors, factors, farmers and others. The subscribers beg to intimate that they have a very large stock of all sizes of agricultural drain pipes on hand. These pipes are all 15 inches long and are of first-class quality. Having a siding within the works, they are in a position to despatch all orders on the shortest notice. Keith, Harriman & Watson, Northern Patent Brick and Tile Works. Office 187 King Street, Aberdeen. 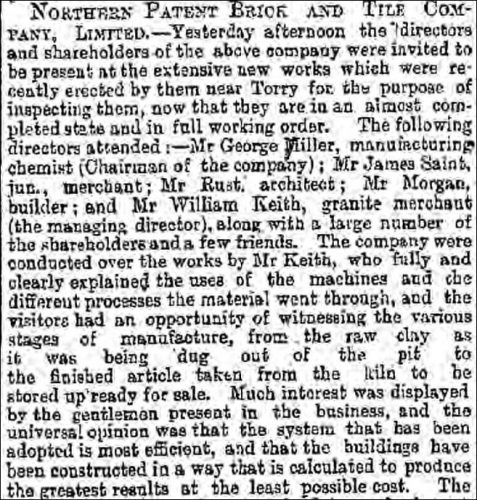 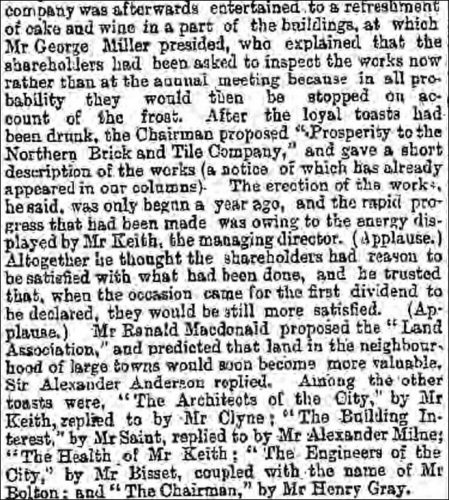 13/11/1883 – Banffshire Journal – The Northern Patent Brick and Tile Company Limited beg to intimate that their new works at Torry are now in full operation and that they are in a position to supply every description of agricultural drainage materials and bricks of all various sizes. They also keep a large stock of fire bricks, fire plates, sewage pipes, vent linings &c. They have also to intimate that the Northern Agricultural Company have been appointed sole agents for the sale their goods to farmers and orders will be received and supplied by their representatives at all the Stations in the Great North of Scotland Railway and 187, King Street. Aberdeen, October 1888.

01/04/1884 – The Daily Free Press  – Northern  Brick and Tile Company – The annual meeting of the Northern Patent Brick and Tile Company was held yesterday in the Bath Hotel, Aberdeen, Mr George Miller, chairman of the directors, presiding.  The report and statement of accounts, which have already appeared in our columns, were held as read.  The Chairman, in moving the adoption of the report, said-All interested in the Northern brick and Tile Company have reason to be satisfied at the result in the first years business, the appearance of the works, and their manufacturing capability.  The “callable up” capital of our Company is £15,000, £7500 was proposed to be called, all of which could have been allotted, but only £5553 has been paid, leaving £1947 to be held or issued to factors, architects, or builders who are likely to forward the interest of our Company or otherwise allotted to the present shareholders if additional capital is required.  The overdrawn bank account has been expended principally upon the cottages, an outlay not provided for, but which will be profitable to our Company, and convenient to those men whose duties require their constant attendance at the works.  Your directors have met in the city monthly, and frequently at the works since the incorporation of our Company, on 19th October 1882.  Early in November, the founds for kiln and chimney were laid being for stability in concrete.  The frost of December stopped building operations, but they were resumed in January 1883.  By the end of March the kiln was completed, but owing to boisterous weather the chimney was not finished till the end of April.  In June, brick and tile making was commended, and it continues well into November-in all about five months-but a month was practically lost through wet weather.  The sparred floor, measuring 138 feet by 60 feet placed over the kiln, will give large drying space for drain tiles, enabling the radiating heat to be utilised, and tile making to be carried on in winter.  During the past, limited season there were made 612,000 bricks, 359,000 various sized drain tiles, and 157,000 collars to suit. The mild winter induced a large demand for drain tiles, which necessitated purchases to supply pressing orders, which still continue, but which are not likely to occur again, machinery having been erected to make all sizes of pipes and solid, hollow, rounded, and circle bricks. The peculiar construction of the kiln burns those goods with great regularity, while the pressed bricks make a clean job, and, when combined with white bricks, very neat work, as may be seen at the cottages.  For the coming season, 6000 cubic yards of clay has bee dug out of the bank, tempered and weathered for brickmaking, one of the assets of the balance.  The suggestion made at the first annual meeting to erect houses on the upper road to Torry has, for sundry reasons, been postponed.  In place of those contemplated houses, the cottages referred to have been erected on waste ground and nearer the work.  My own special object, as I believe that of others, in becoming a partner of this Company, was, if possible, to assist in the erection of airy, well-drained, one, two, and three-apartment, cheap rented houses where families could live decently, and little children would not be huddled together, for it is evident that the efforts of sanitary and White cross Associations, pulpit and Sunday school teaching, are all greatly hindered by the present general housing of those who cannot earn large wages.  We have taken power to erect houses to rent and to sell.  It would require a large capital to build and rent. But when bricks get into stock, and a secondary street is opened in Torry, houses, as indicated, might be erected, as an outlet for bricks and profit would result from their erection.  If the houses were purchased by a sanitary association fair interest would be got for the investment, while the houses could be rented at low rates and superior privileges are given.  The vicious system of long credits that prevails in Aberdeenshire is not followed out by our Company.  Nevertheless, a debt loss of £9 has been made by an unfaithful creditor, and but for the energy of Mr Keith in having arrested at Glasgow an absconding debtor on his way to Sydney, other £25 would have been lost.  The smart payment of accounts demanded by our Company is objected to by some, but they err.  Long credits and over clemency is injurious to both creditor and debtor, leading to the temptation to absconding or fraud.  We may, therefore, calculate that while Mr Keith continues manager, without being oppressive, whatever profits are made will be divided among the share-holders-(applause).

The report was adopted.

On the motion of Mr Sievwright, seconded by Mr J. Collie Smith, Major Ross and Mr James Saint were re-elected as directors.

Mr G. G. Whyte, C.A., was the re-appointed auditor of the Company.

On the motion of Mr Saint, a vote of thanks was passed to the chairman, and the proceedings ended. 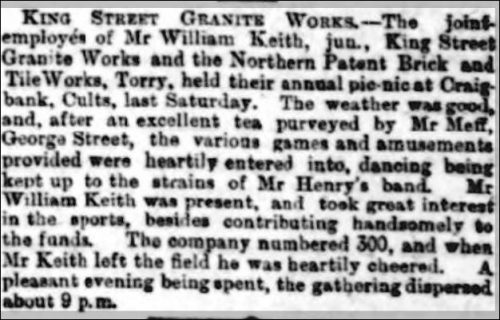 01/12/1885 – Aberdeen Free Press –  Landed proprietors, factors, farmers and others. The subscribers beg to intimate that they have on hand a large stock of the various sizes of agricultural drain pipes. These pipes are all of first-class quality, well burned, and 15 inches long. For particulars, apply at the office,  187 King Street, Aberdeen; or to the agents of the Northern Agricultural Company, at the various stations. The Northern Patent Brick & Tile Coy., Limited, Works, Torry,

27/03/1886 – Aberdeen Press and Journal – Aberdeen and Northern Brick and Tile Company. The directors of this company have resolved to recommend a dividend on the years business of 10 per cent. (Note – SBH – I am not certain if this article relates to the Northern Patent Co Ltd but I have added it here meantime to ensure it is recorded).

21/01/1886 – Aberdeen Press and Journal – Article on the Aberdeen locality … Torry – 5 Acres of the ground are now occupied by the Northern Patent Brick and Tile Company – brickworks, be it noted, that are innocent alike of smoke and smell thanks to modern improvements in the manner of baking clay … 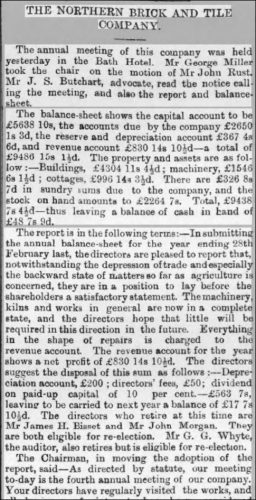 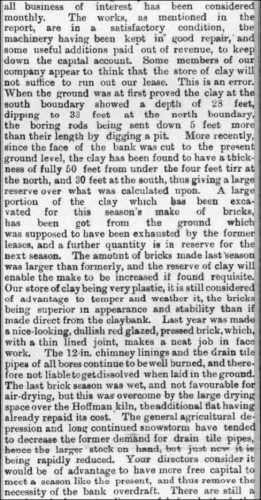 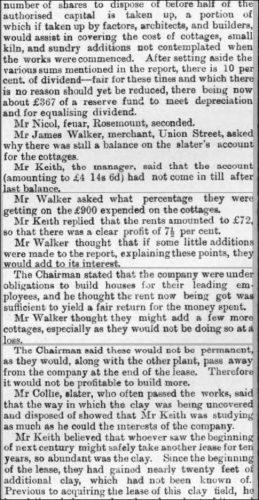 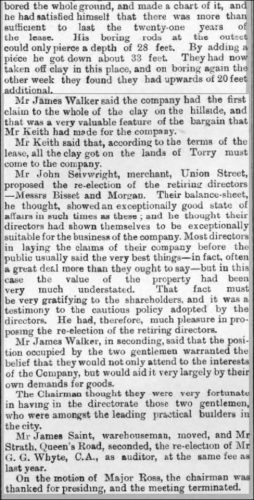 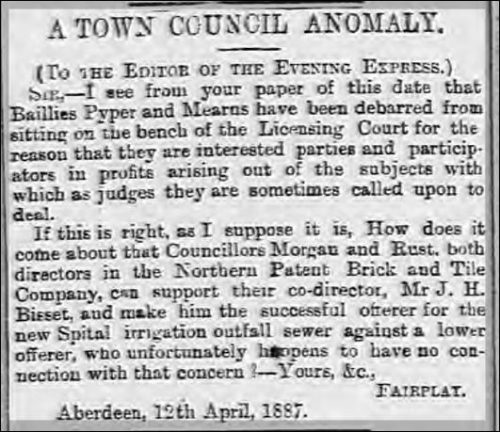 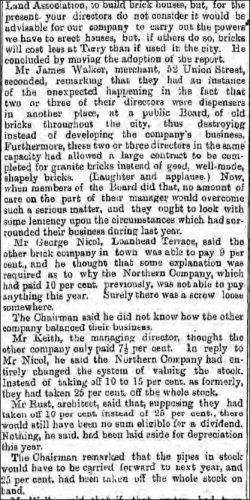 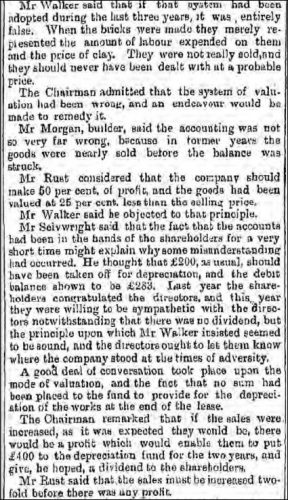 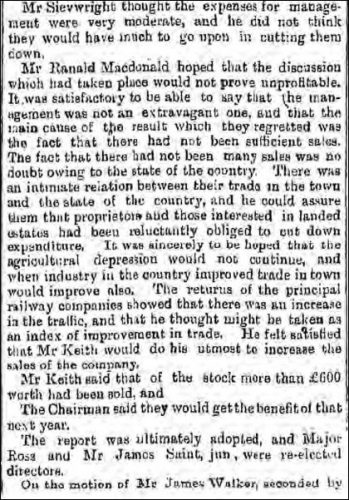 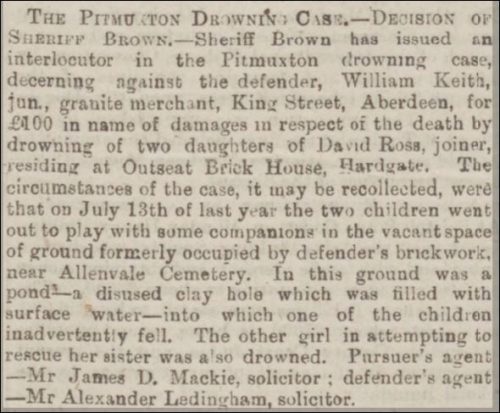 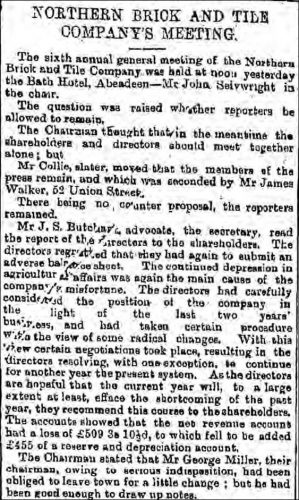 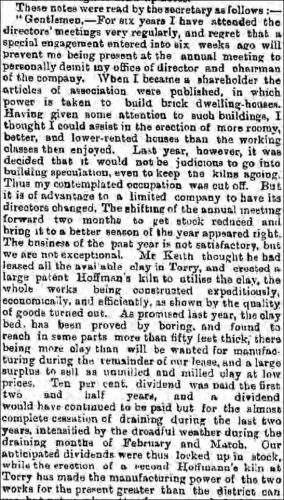 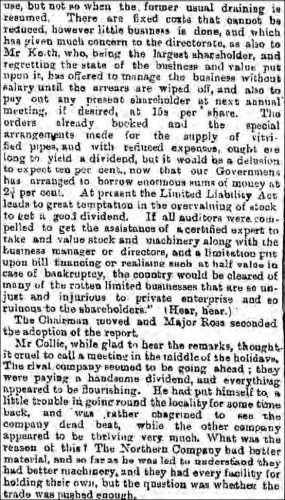 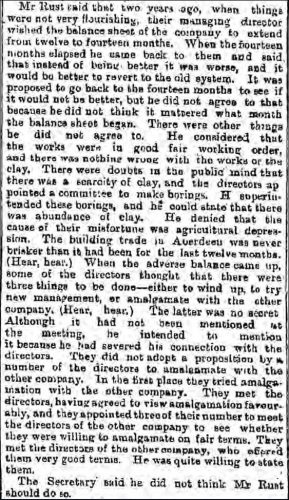 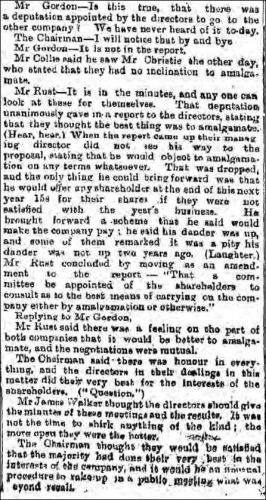 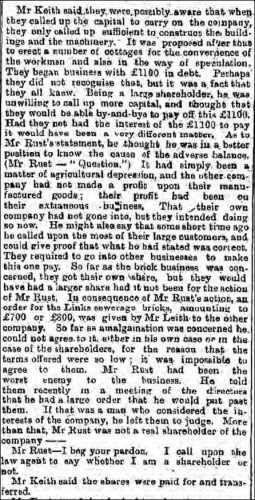 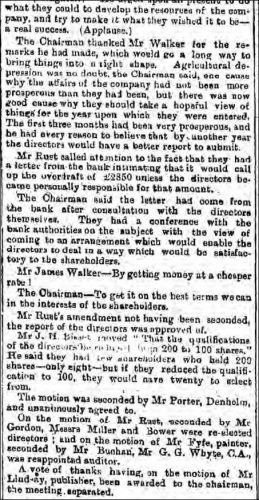 29/05/1889 – Aberdeen Evening Express – A meeting of the Northern  Brick and Tile Company was held in the Bath Hotel this afternoon – Mr J Smith, Draper presiding. The report and balance sheet were read and approved of. As the revenue account, however, showed a deficiency, a committee was appointed to inquire along with the directors into the matter and the meeting was adjourned for a fortnight. 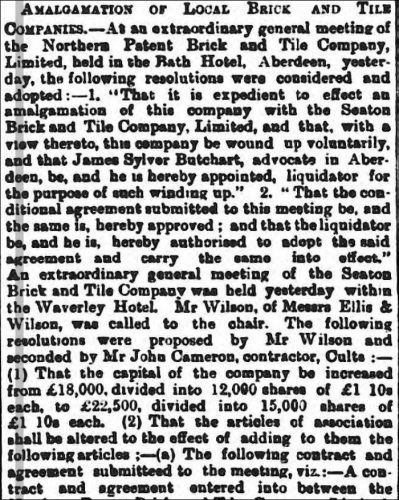 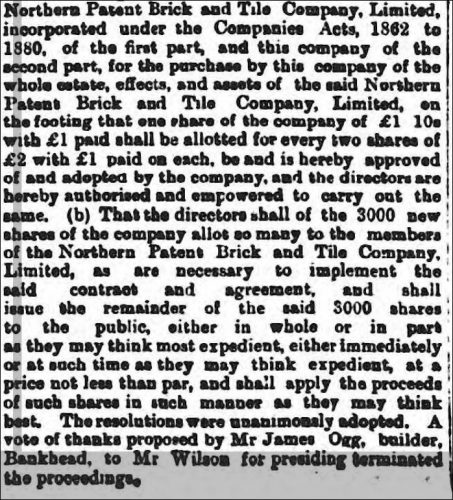 10/08/1889 – Aberdeen Peoples Journal – Amalgamation of brick and tile companies. At an extraordinary general meeting of the Northern Patent Brick and Tile Company Limited held on Monday, it was unanimously agreed to effect an amalgamation with the Seaton Brick and Tile Company. The shareholders of the later Company have approved this arrangement and the former concern will now be wound up voluntarily, Mr J S Butchart, advocate having been appointed liquidator. The capital of the Seaton Company will now be increased from £18,000 divided into 12,000 shares of £1 10s each to £22,000 divided in 15,000 shares of £1 10s each. 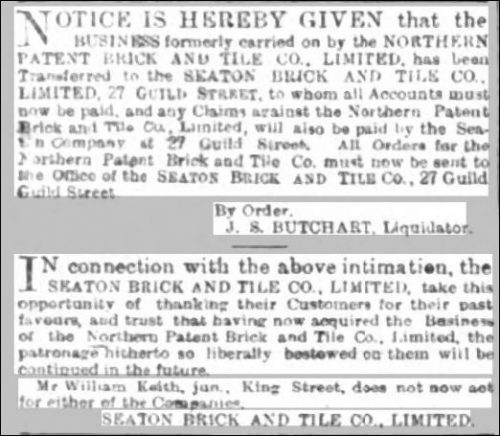 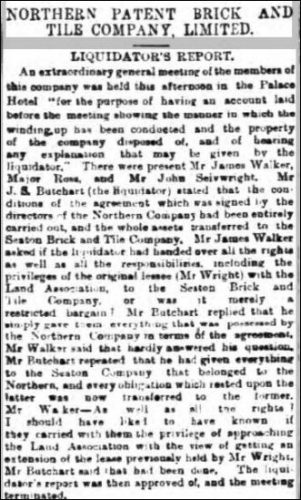 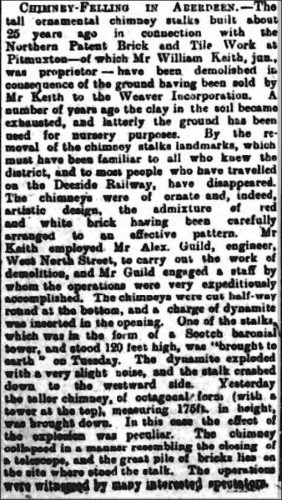 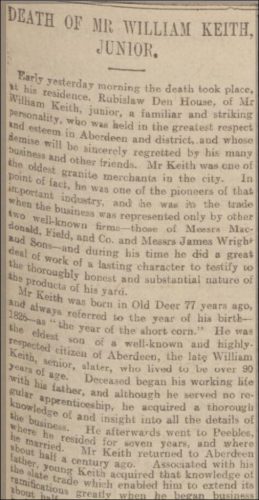 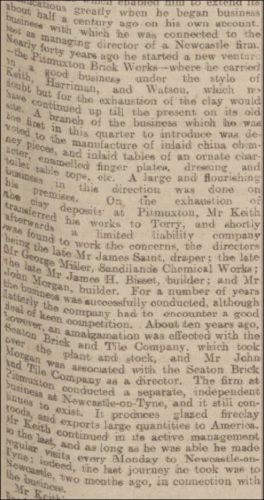 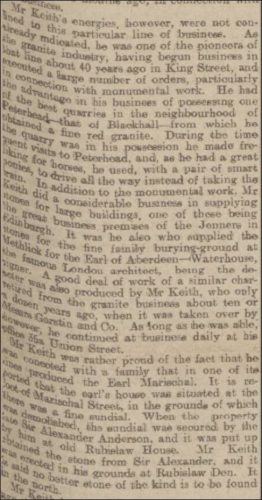 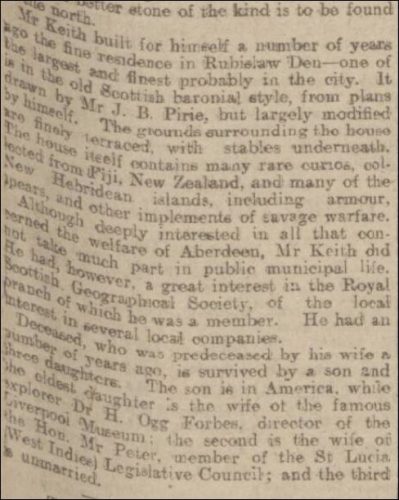 16/07/1926 – AberdeenPress and Journal … Then, many persons will remember the fancy chimney-stalk of the “Northern” Brick and Tile Works at Pitmuxton, not far from the Bridge of Dee …