22/11/1859 – Banffshire Journal – Total abstinence Udny. On the evening of Monday the 14th current, a meeting was held in the house of Mr John Leys, Quarry, Udny, for the formation of a Total Abstinence Society. Mr Robert Wilson, of the Eslemont Brick and Tile Works, was called to the chair, and a society formed, to be called the Pitmmedden (Udny) Total Abstinence Society, and the following individuals elected office-bearers: Alex. Thomson, tailor and clothier. Charles Henderson, builder. Mr James Park, miller. Secretary, Mr John Leys, farmer. Committee, John Chisholm, John Gibb, and William Gibb. The society, thereafter, resolved to join the Scottish Temperance League, and the requisite amount having been subscribed, was forwarded.

1865 – 1871 – Scotlandsplaces – Esslemont Brick and Tile Works. A short distance northeast of the farm of Chapelton, are kilns and sheds for the manufacture of brick and tiles, they are the property of Henry Gordon Woolrige Esq. of Eslemont.

09/04/1885 – Aberdeen Free Press – The funeral of the late Robert Wilson, Esslemeont Brickwork, Ellon will take place on Saturday the 11th at one o’clock. All friends wishing to attend the funeral will kindly accept this invitation. Esslemont Brickwork. April 7th. 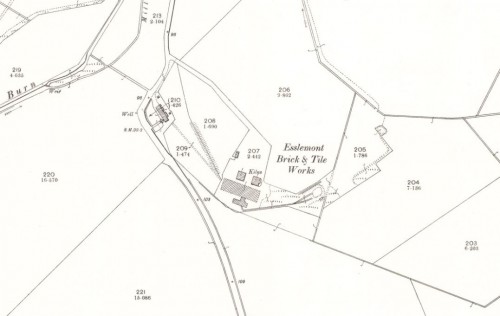 Turriff and Plaidy Districts. Drain pipes all sizes and best hard burned red bricks may be had from stock at Plaidy Brickwork on applying to Mr W. D. Morrison.

Also for Slains, Auchmacoy and Pitlurg Districts. Drain pipes, all sizes in 15″ lengths may be had from stock at Pitlurg Station on applying to the station master. For particulars as to delivered prices at other stations apply to Seaton Brick and Tile Company Limited, manufacturers, fire clay, lime and cement merchants, Aberdeen. Estimates for all kinds of building and sewerage material also chimney cans, flower pots &c given on application.