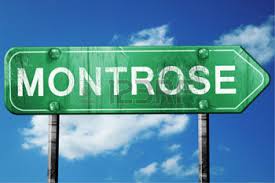 Canmore – Montrose Brick & Tile Works, Pugieston, Montrose.  Alternative brickworks include – Dryley’s Brick, Tile and Pottery Works, Hillside, Montrose, Angus. (sometimes spelt Drylees). (Note – SBH – I am uncertain about the alternative names given to these brickworks by Canmore as the Pugieston and Montrose Brick and Tile Works were a separate site, albeit situated nearby.

Dryleys Brick and Tile Works was established in 1816 on the clay lands around Dubton. The works manufactured building material for the rapidly growing burgh and tile drains which were used by farmers for draining their fields. The works flourished and by 1960 seven large brick and tile drying kilns were in operation. Over 60 workers were employed and a railway line was laid to bring clay from the nearby quarry. Between 1838 and 1856 Dryleys was managed by a man called David Crowe. It was he who introduced the manufacture of pottery. In 1856 Dryleys was taken over by Col. Renny Tailyour, proprietor of the estate on which the works stood. Although it continued to flourish as a brickworks, the subsequent history of the Pottery is rather obscure. Commercial production seems to have ceased by the end of the 1860s. A few dated pieces from the 1870s and ’80s were probably turned out by the workmen in their spare time. In 1885 Dryleys was taken over by Seaton Brickworks of Aberdeen and it closed down altogether after a few more years.

1792 – The 1985 publication ‘A survey of Scottish brickmarks’ suggests the works opened at this time and that during its existence the works had many proprietors. 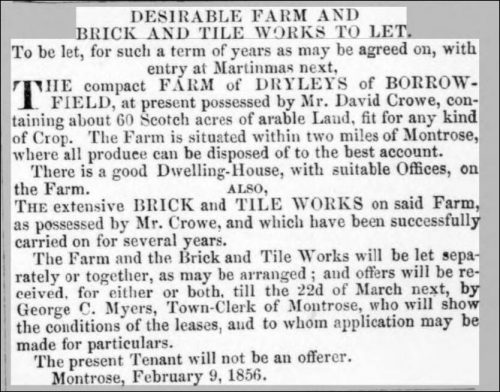 26/12/1856 – Montrose, Arbroath and Brechin review – Displenish sale at Dryley’s Brick and Tile Works. To be sold, by auction, on Saturday, 3rd January next, at Dryleys Brick and Tile Works, near Montrose and adjoining Dubton Junction. The following Agricultural Implements belonging to Mr Crowe:  A Threshing Mill, with 4 Levers; 6 Stone Stathels; 3 Beds and Corn Box; a Grubber, & c. &c. Also, the following Tile Work Materials, viz.  A Steam Engine, 4 Horse-power, worked up to Six, with very large Boiler, every way complete; a few Shafts and Pulleys; Pipe and Tile Machines; 2 Coal Barrels, Tables, Wooden Steps, a Bruising Apparatus, a lot of 7-8th inch Boards, a number of Wheels from 6-inch to 4-feet diameter, a quantity of damaged Drain Tiles and Bricks &c.  At the same time will be sold, the various articles belonging to the Pottery Work, among which are-Stucco Moulds, Squeezing Box, Turning Lathe, Wheel, Boards, Framing, Benches, Silk Sieves, &c.; 22 Windows and 12 Doors.  Also, a lot of Stone Pavement; a Writing Desk; Flooring, 83 feet by 20; a quantity of Roofing; Chimney Cans and Tops; a quantity of Water Pipes; a lot of Firewood, and numerous other articles.  The sale will begin at eleven o’clock, forenoon, with the Farm Implements. James Beattie, Auctioneer. Mains of Dun, December 18, 1856.

1857 – 1861 – ScotlandsPlaces – Dryley’s Brick and Tile Works. A large block of buildings appropriated as brick and tile works. The property of Major Renny Tailyour of Newmaswalls 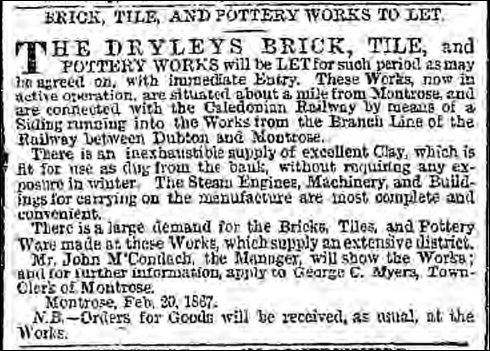 21/05/1869 – Montrose, Arbroath and Brechin Review – Dryleys Brick and Tile Works – A very excellent supply of bricks and drain tiles of all various sizes and of the most superior quality, now on hand at moderate prices. Orders addressed to Mr William Turner, overseer at the works or to David Somerville who travels for them to various local markets will receive the most prompt attention. Dryleys nr Montrose 20/11/1868

20/09/1884 – Dundee Courier  – The reform agitation in respect to the great Franchise Bill demonstrations … The Montrose demonstration … Some 30 workmen at Dryley’s Brick and Tile Works are expected to take part also in the demonstration. 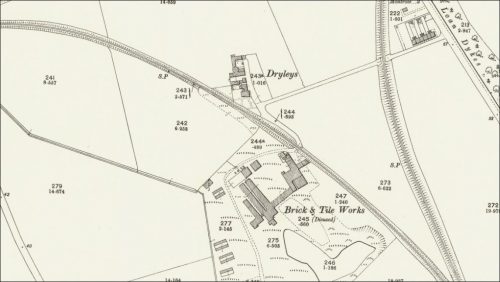 1910 – The 1985 publication ‘A survey of Scottish brickmarks’ suggests the works closed at this time.