Foxley’s patent beaded bricks for gardens. It appears from the details below that these bricks were patented by J Foxley, Stony Stratford, Bucks, England. Contracts with brickmakers were then made allowing them to act as agents to make and sell the bricks. Certainly, in the case of William Hudspith and Co, Wishaw and Berry Hill Brick, Tile, Fireclay and Sewerage Works, Wishaw they were acting as agents to MAKE and sell Foxley’s patent Beaded bricks for garden walls. (Note – SBH – So has anyone seen one of these whether lying around or in situ in a garden wall structure?)

Below- 1864 – Journal of Horticulture, Cottage Gardner and Country Gentleman – On the centre of the face of each brick is a stout bead projecting half an inch from its surface; this being pierced with holes at intervals of about 2 inches, serves by means of bast, string, or wire, to tie in the branches of trees. Every gardener knows that walls against which fruit trees have been trained for a long series of years become much defaced by nail holes and that repointing becomes necessary, not only to allow of fresh nails being driven in, but to prevent insects lurking in the crevices; but walls erected with these bricks have an ornamental appearance, and never get defaced with nail holes; the trees may be kept perfectly clean and free from insects; no nailing is required, and there is, consequently no danger of bruising the branches; and no extra fittings of iron, copper, or wood trellis are needed. The bricks are made of the ordinary size, and, therefore, can be used in connection with common bricks. They are made either with a horizontal or vertical rib, but the horizontal is considered the best for general use. One thousand corrugated bricks are required to 3500 common bricks. The smaller engraving below represents a single brick, showing the mode in which the projecting rib is perforated. The three holes at the end of the brick are only to make the bricks lighter, burn sounder, and give a firmer hold of the mortar. We shall be glad to hear of their being tried on a large scale. 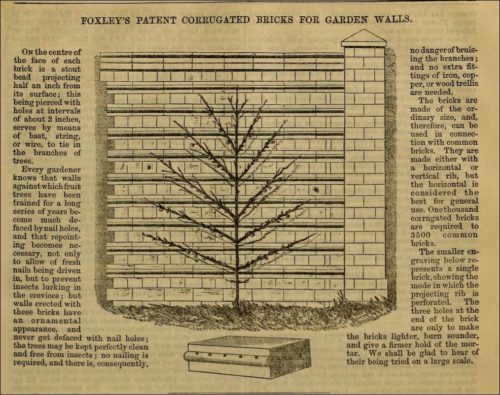 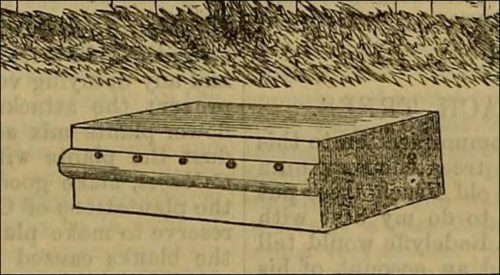 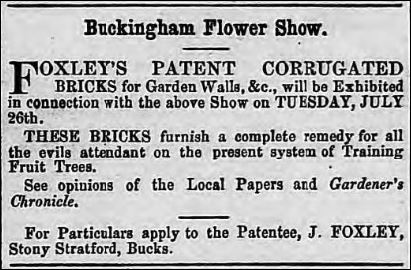 11/07/1865 – Sussex Advertiser – Tunbridge Wells horticultural fete. Mr White, of Rotterfield, exhibited a specimen of Foxley’s patent bricks for garden walls. These bricks have an ornamental appearance, and never get defaced with nail holes, the trees may be kept perfectly clean and free from insects, no nailing is required, and, consequently, no hammer, which so often destroys by bruising the tender branches, no extra fittings of iron, copper, wood, &c. The bricks are made of the ordinary size and can be used in connection with common bricks. 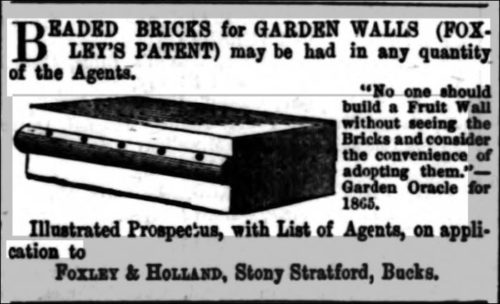 Below – 1866 – Builders and Contractors Price Book.

Below – Scotland appears to have had two brickworks acting as agents for Foxley’s bricks. 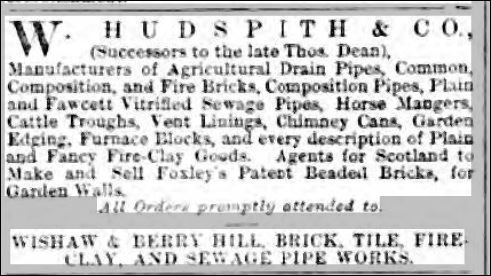 Below – 1867 – Artizan Engineering – List of applications for letters patent. J Foxley – bricks. (Note – SBH – So is this an amended patent or something new unless or was Foxley bluffing about patenting it c. 1864!) 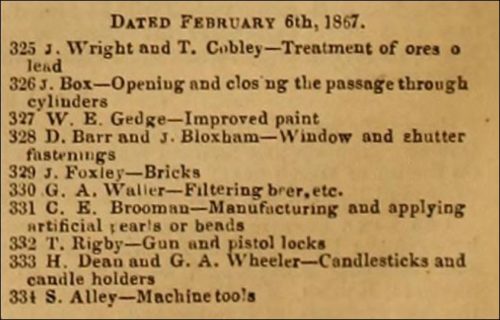 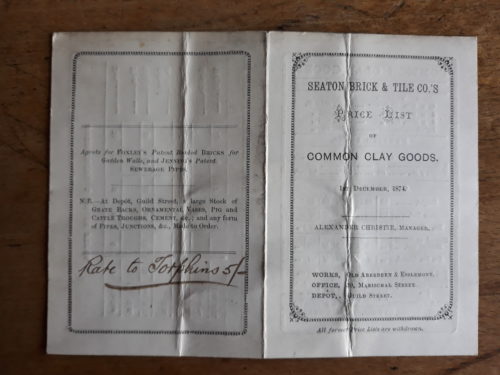 Grafton Regis (SP 751474)- A brick kiln is shown here on the 1835 1″ 0.S. map and there is a document regarding Grafton Regis brickworks dated 1751. It was at that time owned by one J. Foxley.
The works may have been disused for some time during the middle of the 19th century for it is not until 1885 that the brickworks is noted in the directories, again in the control of the Foxley family. Various members of this family also held brickworks at Yardley Gobion, Greens Norton, and Passenham during that century. The 1883, 6″ 0.S. map shows a moderate-sized yard with a single kiln and moulding and drying sheds in a cruciform nearby. The last reference to the yard is in 1900.