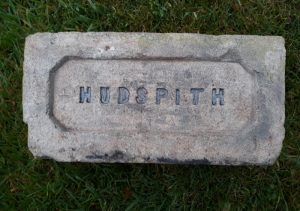 This was possibly manufactured by Wm Hudspith & Co, Wishaw Pottery and Brickworks, Wishaw or equally, it could have been made at his Haltwhistle Brickworks, Northumbria.

Because of the find location in England, it is possibly more likely it was manufactured in Northumbria. Hudspith bricks manufactured at Wishaw appear always to be stamped ‘Hudspith Wishaw’. 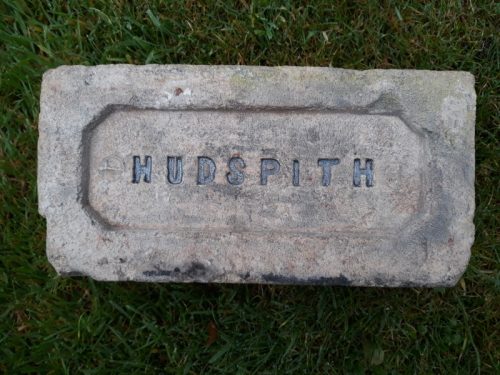 Below – This example was found by Ian Suddaby at Bowness on Solness, England, so this could also be a Hudspith Northumbria product. 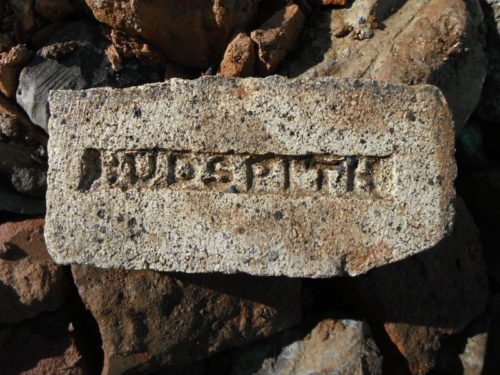 This newspaper article highlights Hudspiths business connections with the West Coast of England around Maryport, Workington and the Solway. As such I am fairly convinced that bricks stamped solely ‘Hudspith’ are manufactured at his works at Haltwhistle and his bricks manufactured in Scotland were stamped ‘Hudspith Wishaw’.

Below – 24/11/1902 – Newcastle Daily Chronicle – Alderman William Hudspith, of Greencroft, Haltwhistle, passed away on Sunday afternoon at 4.20, in the presence of the members of his family and friends. For many weeks the deceased passed through a severe and trying illness, and during the past few days he has lain in a semi-conscious condition. The decorated gentleman leaves a widow and a family of four daughters. The interment will take place at Haltwhistle Cemetery on Wednesday afternoon, at 2.45 the service being held in the Presbyterian Church. William Hudspith was born at Cowburn Rigg, a farm to the north of the Roman Wall and about four miles from Haltwhistle, in the year 1824. With little or no education in early life, owing to the distance from any school, he was obliged to resort to self-education and devoted his time in that direction when not engaged in assisting his parents on the farm. At the age of 18, he secured employment with the contractor who was engaged in making the North-Eastern Railway from Haltwhistle to Alston and acted in the capacity of the timekeeper. Probably owing to his keen business aptitude and the esteem in which he found favour with his employer when the latter died Mr Hudspith was appointed sole trustee. Later Mr Hudspith acquired the South Tyne Brick and Pipe Works from Messrs. Nelson, and which were then worked on a small scale. Always of a courageous and speculative mind, in April 1897, the first sod was cut by his daughter for the shaft which was expected to further extend the workings of the South Tyne Colliery. He was also a joint owner in a large brickworks and colliery at Wishaw and in the Langley Brick and Pipe Works. He also obtained large interests and took an important part in the iron and steel industry at Maryport and Workington and along with the late Mr Crawhall Wilson (Coanood Colliery) and Mr Hedley (Newcastle) took part in the formation of the Solway Hematite Iron Coy, a concern which he eventually became general manager and chairman of directors. He was also a director of the Mossbay Works, one of the largest concerns on the West Coast. The West Cumberland Storage Company also found him a director whose judgement was held in high appreciation …