Below – 1859 – The blue cross marks the Hudspith Brickworks. 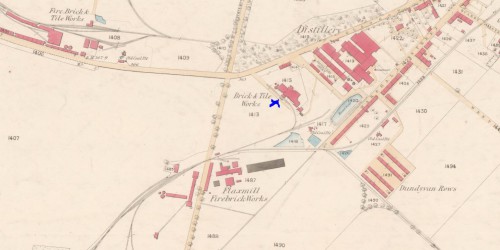 21/12/1861 – Glasgow Saturday Post – Burgh appeal court – A court appeal against the assessment of 1s 6d per pound imposed on all property within the burgh bounds was held on Tuesday, the chief magistrate presiding. A few ratepayers were exempted on the ground of poverty. Appeals were also lodged against the assessment made on minerals, the plea that no minerals were present wrought within the boundary, by either proprietor on Wishaw and Coltness estates or their lessees. Mr Dean appealed against the assessment on his brick and tile works, and Mr Marshall on his stone quarries, on the same plea, both these gentlemen carrying on their several works beyond the boundary line.

Wishaw Tiles from 1 inch to 18 inches in diameter. W. Huspith & Co are prepared to deliver these superior tiles in quantities from 3000 to 3000000 at any principal Station in Cumberland or Westmorland. Wishaw and Berry Hill Works by Motherwell. N.B. (Note – SBH – I believe the Berryhill Brickworks is another name for Hudspiths Wishaw works. See the 1896 map below – just to the South West of the works there is mention of the Berryhill Rows. The use of the name seems short-lived as the newspaper archives only reference in c. 1865). 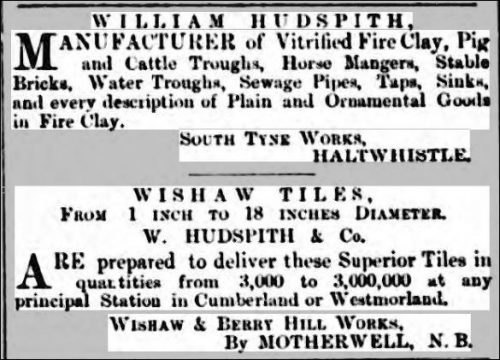 12/07/1866 – Whitehaven News – Inauguration dinner … Shareholders in the Millom Brick Company Limited (Cumbria) together with a few friends celebrated the opening of their new works by a dinner at the Station Hotel, Holborn Hill … Mr Mathews, the managing director was in the chair and the vice-chair was occupied by Mr Hudspith (Mr Mathews partner in a brickworks at Wishaw in Scotland) … 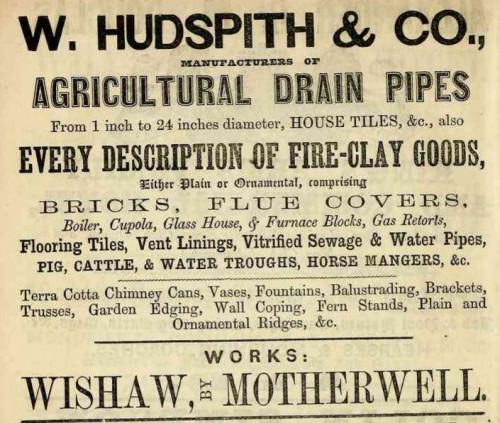 31/07/1867 – Glasgow Herald – Highland and Agricultural Society Show, Glasgow – At stand 75, a display of fire clay from the works of Hudspith & Co, Wishaw. The application of the material in question to drain and sewage pipes, pig and cattle troughs, and ornamental flower stands is illustrated in a number of excellent specimens. The flower stands, designed after the similitude of old tree stumps, struck us as particularly successful.

13/08/1870 – Falkirk Herald – Man Found Drowned. About nine o’clock, Wednesday morning the body of a man was found in a pond near Hudspith’s brickwork, Berryhill Rows. The body has since been identified as that of collier named Owen Garry, residing in Brown Street, Wishaw, who had not been seen or heard since Saturday afternoon last, when he left his lodging. 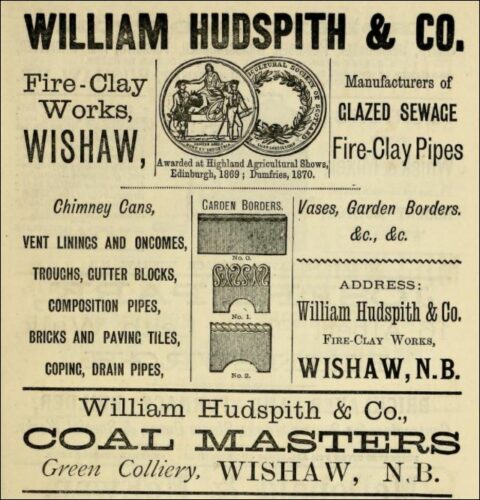 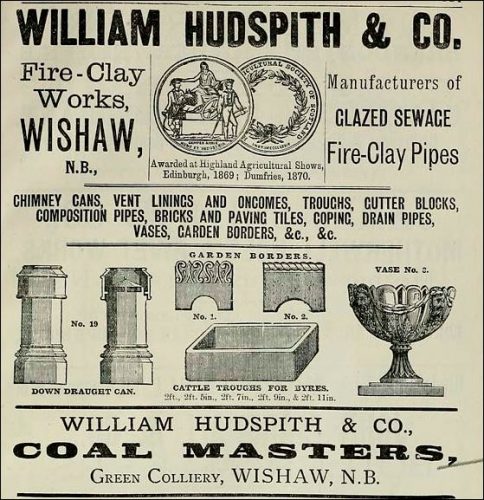 04/06/1887 – Wishaw Press – Accident at the brickwork. An unfortunate accident occurred on Thursday afternoon at the tile works of Messrs William Hudspith Co. One of the labourers, James Donnelly, Steel Street, while engaged in feeding the pug mill used for preparing clay for the manufacture of drain pipes, got his right hand severely injured by allowing it accidentally to get between the rollers. He was attended by Dr Eaglesham and conveyed in the ambulance waggon to Glasgow Royal Infirmary, where it was found necessary to amputate four of the man’s fingers

1893 – Messers W Hudspith’s Brick and Fireclay Works – Started more than half a century ago, these works passed through many hands and it was not until 1864 that the present firm entered into possession of them. Messrs Hudspith & Co manufacture fireclay goods of almost every description including chimney cans, troughs, glazed pipes, coping, vases, garden borders etc besides bricks of various kinds. The fireclay is obtained from the firms Green Colliery adjoining Wishaw South Station. 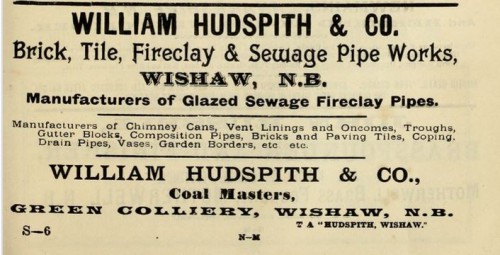 Below – 1896 – Map showing the relationship between Green Colliery, Carbarns Colliery and Hudspiths Brick and Tile Works. 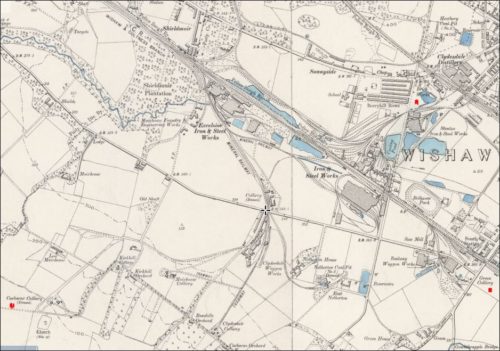 12/02/1900  – Carbarns Colliery is the property of Messrs William Hudspith & Co., and is situated near Cam’nethan Old Graveyard; in fact, it was known at one time as the Old Graveyard Pit. 3 die in pit explosion.

Below – 24/11/1902 – Newcastle Daily Chronicle – Alderman William Hudspith, of Greencroft, Haltwhistle, passed away on Sunday afternoon at 4.20, in the presence of the members of his family and friends. For many weeks the deceased passed through a severe and trying illness, and during the past few days he has lain in a semi-conscious condition. The decorated gentleman leaves a widow and a family of four daughters. The interment will take place at Haltwhistle Cemetery on Wednesday afternoon, at 2.45 the service being held in the Presbyterian Church. William Hudspith was born at Cowburn Rigg, a farm to the north of the Roman Wall and about four miles from Haltwhistle, in the year 1824. With little or no education in early life, owing to the distance from any school, he was obliged to resort to self-education and devoted his time in that direction when not engaged in assisting his parents on the farm. At the age of 18, he secured employment with the contractor who was engaged in making the North-Eastern Railway from Haltwhistle to Alston and acted in the capacity of the timekeeper. Probably owing to his keen business aptitude and the esteem in which he found favour with his employer when the latter died Mr Hudspith was appointed sole trustee. Later Mr Hudspith acquired the South Tyne Brick and Pipe Works from Messrs. Nelson, and which were then worked on a small scale. Always of a courageous and speculative mind, in April 1897, the first sod was cut by his daughter for the shaft which was expected to further extend the workings of the South Tyne Colliery. He was also a joint owner in a large brickworks and colliery at Wishaw and in the Langley Brick and Pipe Works. He also obtained large interests and took an important part in the iron and steel industry at Maryport and Workington and along with the late Mr Crawhall Wilson (Coanood Colliery) and Mr Hedley (Newcastle) took part in the formation of the Solway Hematite Iron Coy, a concern which he eventually became general manager and chairman of directors. He was also a director of the Mossbay Works, one of the largest concerns on the West Coast. The West Cumberland Storage Company also found him a director whose judgement was held in high appreciation … 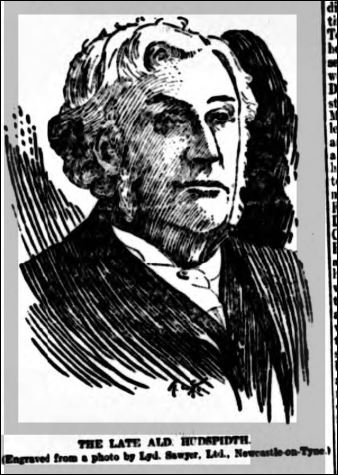 28/11/1902 – Hamilton Herald – Death of William Hudspith (23/11/1902)  – The late Ex Baillie Hudspith – On Wednesday the grave closed over the mortal remains of the late ex-Bailie Hudspith. who died at his residence at Haltwhistle, Northumberland, on Sunday, at the ripe old age of 77. The deceased gentleman, who at one time played an important part in local affairs, was born at Cowbarn Farm, near Haltwhistle in 1825. Brought up in that district, he came to Wishaw in 1861 as one of the partners of William Hudspith & Co, who had acquired the Wishaw Fireclay Work, from the representatives of the late Thomas Dean. Mr Hudspith during his stay in Wishaw was well known in Scottish business circles. He also took a considerable and active interest in public affairs being a member of the local Commission Board and afterwards one of the Baillies.  In politics, he was an ardent Liberal, and a loyal supporter of Major, afterwards Lord Hamilton of Dalzell who represented this part of the County before the redistribution of seats. While in Wishaw. Mr Hudspith attended the Wishaw Established Church, of which the Rev. A Harper is at present the minister. Though Mr Hudspith bad been since 1870, residing in Northumberland, where he had considerable business interests, he had never given up his Wishaw connection, and latterly he and Mr James Riddell were the sole partners of the firm, Messrs Wm. Hudspith & Co., which conducted the Wishaw Fireclay Works and the Carbarns Colliery. As in Wishaw so in his native district Haltwhistle he took a keen interest in public affairs being a member of nearly all the public boards in the locality. Naturally, the removal of Mr Hudspith by death has been deeply felt in Haltwhistle and also in Wishaw.

1940 – Map does not show William Husdpith and Co works.

These planters are all in good condition, there are some slight chips but this is not uncommon with this material.

One of the planters is stamped with a registration design diamond mark and having researched this I have found that it was produced on 3rd June 1868 by a company in Haltwhistle, Northumberland called W Hudspith South Tyne Works. The photos include the registration mark and also images of the original jardiniere and the Brickworks where made.

This company grew from employing 20 workmen in 1861 increasing to 44 by 1881, making bricks, tiles and troughs.

The tree stump planters were well known in the area and it appears that it was quite a status symbol to own one and have it displayed in your garden, some of which were in gardens in and around Haltwhistle!

They are great, unusual decorative pieces and can be planted with either strawberry plants or any plant of your choice. 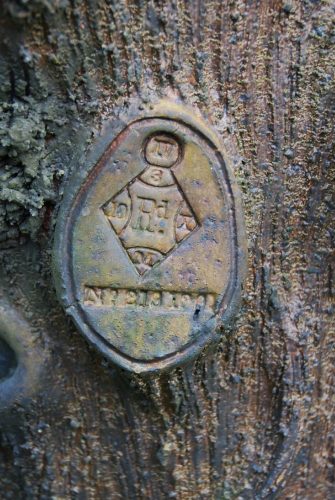 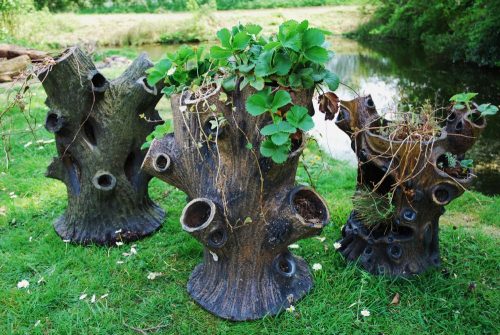