(Note – SBH – It is sometimes difficult to decide on whether information found should be allocated to the Newmains Fireclay Works page or the Newmains Brick and Tile Works page. If anyone picks up on any errors on these pages please let me know).

The Coltness Iron Co Ltd, Newmains, South Lanarkshire, Scotland, was established in the 19th century by Henry Houldsworth and his brother, Thomas. The brothers settled for the board and financial control, leaving the technical business of mining and metal making to competent managers. By 1922, the iron and steel interests of the business had been much diminished and the company concentrated on mining, appointing William Hamilton Telfer as general manager. Telfer came from a long family tradition of mine managers and had considerable mining experience in the Scottish coalfields. By this time, the company had already made strong connections with other important Scottish companies through shared directorships that were a great help to Telfer during the inter-war period. Following the general strike of 1926, Telfer urged the board to abandon coal iron making and the furnaces were dismantled. A programme of modernisation was then undertaken on the mining side of the business and new collieries were opened at Kingshill, South Lanarkshire, and Overtown, North Lanarkshire, even though the economic climate was unfavourable to such ventures. However, coal output steadily increased during the 1920s. The company’s position was made stronger through its link with the Wilson & Clyde Coal Co, colliers, Fife, with whom they purchased the business of James Waldy & Co, coal merchants of Edinburgh and Glasgow, Scotland, which provided a wide sales network for the coal produced. Telfer’s influence and success resulted in his appointment as managing director of the company in 1927 and he was able to influence the board to resisted the attempts to amalgamate coal companies through the 1930 Coal Miners Act.

It was clear that the company could not survive solely as coal masters and it was various diversifications that kept the company viable. Most notably, it was the success of the cement works at Newmains and the brick works at Carluke, South Lanarkshire, and Jordanhill, Glasgow, which provided the support for the colliery enterprise in this period.

(Jordanhill Brickworks were established about 1890 producing building bricks. It survived until 1928, by which time the raw material, the local bings, was exhausted. This Coltness Iron Company enterprise was then closed and the machinery transferred to the Giffnock Brickworks, on the site of the then recently closed Giffnock Colliery. The works at Giffnock remained until 1942 when the lease ran out and the plant was then dismantled. – source )

The 1930s saw the acquisition of neighbouring collieries such as the Ardenrigg Coal Co Ltd, South Lanarkshire, in 1932 and the Darngavel Coal Co Ltd, North Lanarkshire, in partnership with the Wilson & Clyde Coal Co Ltd, Bellshill, Glasgow. In 1934, the company sub-let part of the coalfields of Stewart & Lloyds Ltd, Corby, England, near Rotherham, South Yorkshire, England, and purchased that company’s 35 per cent stake in Wilson & Clyde Coal Co Ltd. The Coltness Iron Co Ltd had previously moved into the Warwickshire coalfields at Kersley, near Coventry, England, in 1902, though the purchase of the Warwickshire Coal Co Ltd. This colliery had been unprofitable between 1911 and 1923, but Telfer re-organised the concern and made it profitable.

Telfer retired as managing director in 1936, becoming vice chairman although he continued as manager of the Warwickshire concerns which now including Kersley’s neighbouring pit, the Sandwell Park Colliery in South Staffordshire.

In 1937, the company acquired the Cumberland Coal Co (Whitehaven) Ltd at Whitehaven, Cumbria, England, at the suggestion of Telfer. The 1930s also saw the development of the company’s cement and brick works and the steel foundry was modernised and expanded into the production of non-ferrous metal in partnership with ICI as Scottish Non-Ferrous Tube Industries Ltd, Hillington, Glasgow.

The company expended some £800,000 on new developments between 1936 and 1941 without having to increase the companies share capital and during difficult economic conditions. As a result, Telfer was appointed chairman in 1941, a post he held until 1946. By then, Coltness Iron Co Ltd was one of the largest colliery concerns in Scotland and England, employing nearly 5,000 men in both countries with an output of 5 million tons. Telfer had overseen improvements in working conditions, miners welfare, housing and pit safety.

The National Coal Board acquired the company’s assets in 1947 when the company was nationalised under the Coal Industry Nationalisation Act 1946. The Coltness Iron Co Ltd became Coltness Holdings Ltd in 1946 in order to acquire the assets and capital not taken over by the National Coal Board and entered into voluntary liquidation in 1947. At the time of nationalisation, the company had pits at Blairhall, Douglas, Kingshill, Hanockrigg, Woodend, Gillhead, Greenhead, Overtown, Duntilland and Collyshot, all in Scotland.

Coltness Iron Company – Early in 1937 it was decided to build a brickworks and this was done at Stepends. It came into production in May 1938 and has remained active ever since; it has a capacity of approximately 10,000,000 bricks a year … When W.H Telfer resigned the Chairmanship in 1945 he was succeeded on the board by W.A Wilson, Colonel Houldsworth becoming chairman. One of the newly constituted board’s decisions concerned the future of the brickworks, which were sold to the Coltness Company to which they passed on the vesting date of 01/01/1947 when the collieries were transferred to the National Coal Board. About 1880 the Coltness Company began making bricks. Two brickworks were built at Hallcraig, Carluke and the other at Jordanhill on the Western outskirts of Glasgow. The former was in operation until 1947 when it was replaced by a modern works at Mayfield, also in the Carluke district. The bricks were made from blaes left from earlier mineral workings. Large quantities of Hallcraig bricks were used in building the London Midland and Scottish low-level railway through Glasgow; 8,000,000 bricks were supplied for this purpose, the largest ever single order for bricks the Company’s salesmen ever had.
c.1854 – 196os – The 1985 publication ‘A survey of Scottish brickmarks’ suggests that the Coltness Iron Company operated the works during this period.
12/01/1855 – Glasgow Herald – Royal Patriotic Fund, Lanarkshire. Contributors – Newmains and Wishaw Brick and Tile Works per Mr Thomas Dean and family £2 and workmen in his employment £7 5s. 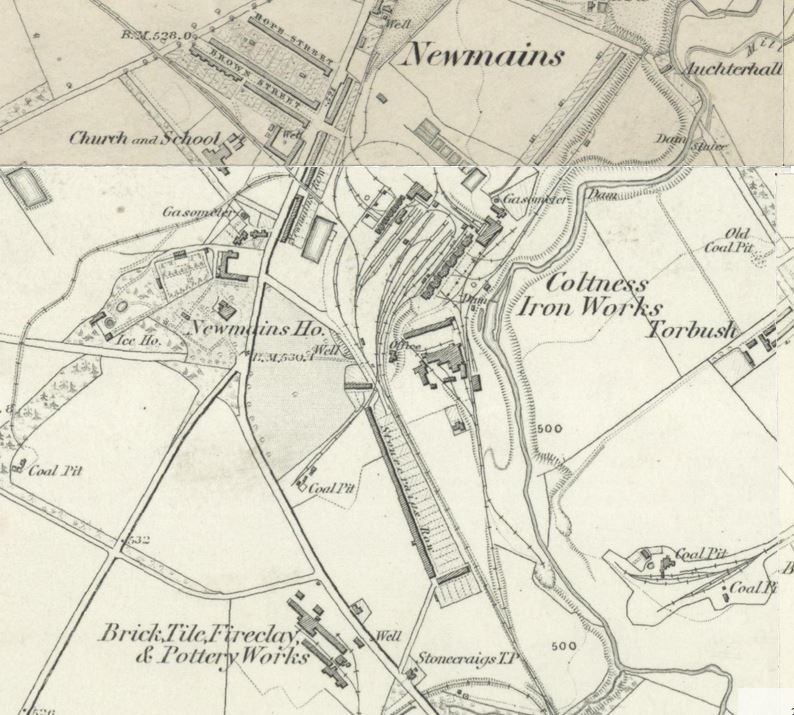 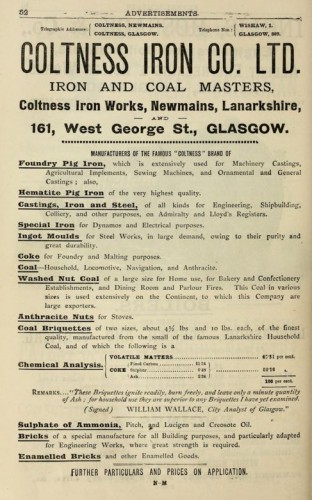 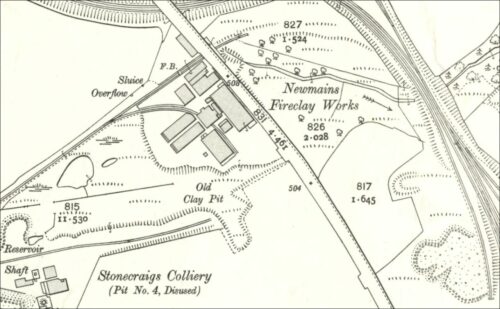 1934 – Wishaw Press – Coltness Iron Company year-end report 31/12/1933 … Hallcraig and Giffnock Brickworks have been on full production throughout the year. Additional kilns have been erected at Giffnock. Newmains Brickwork, producing sanitary fireclay goods has only been partly employed. 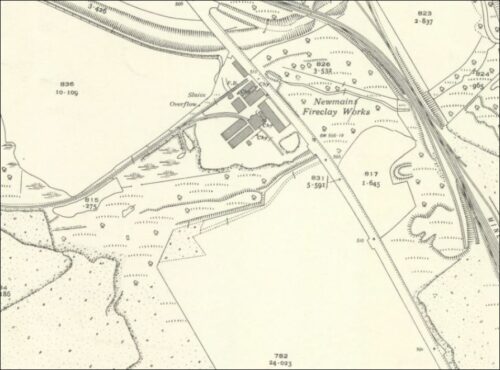 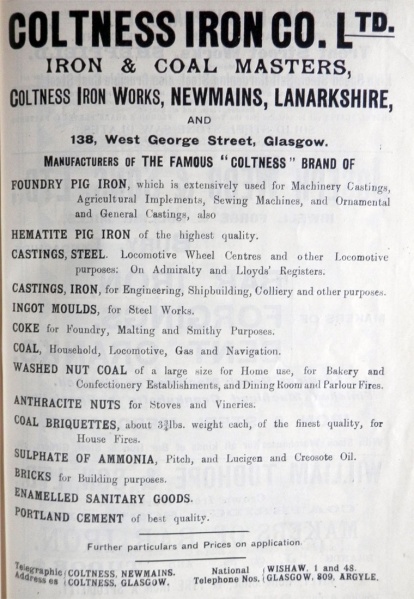