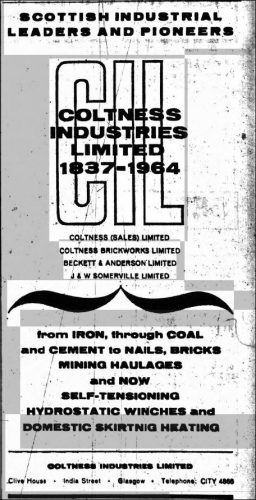 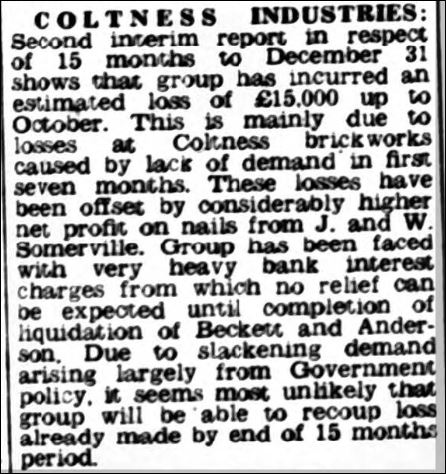 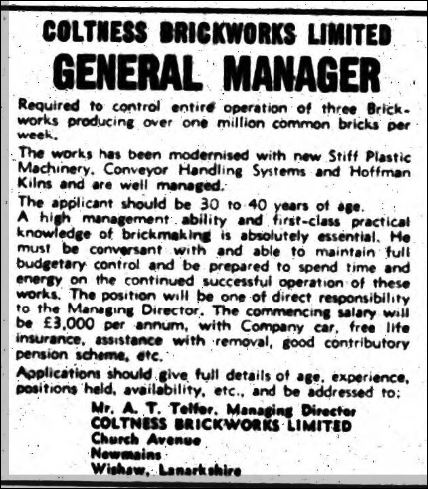 30/11/1973 – Financial Times – – Pope and Pearson have sent out details of the proposed acquisitions from Coltness Group of Coltness Brickworks (now Caledonian Brick) and Ernest Abram Brickworks) (now Fife Brick). Pope and Pearson are forecasting combined attributable profits before tax for the enlarged group for – the 17 months ending December 31, 1973. of £240.000, including’ In the case of the two acquisitions their results for a six-month period only on this basis, the annualised profits before tax and extraordinary items for the enlarged group would be £280.000. The directors intend to recommend a final dividend of 1.66666p per share gross: this and the interim dividends already paid to make total dividends equivalent to 2.4541 6p per share for the 17 month period. Treasury has indicated that it will consent to final. In a normal financial year and assuming annual profits before tax of £280.000, the directors would expect to recommend dividends of 2.8p net (4p gross). As previously announced, Coltness Group owns 39 per cent, of Pope and Pearson and is obliged to make an unconditional offer to acquire the remaining shares at 320p per share wish and, in addition, has agreed to acquire all the preference shares for 60 p per share cash. These offers will be made on January 2. Coltness Group has informed Pope and Pearson that it intends to retain an interest in not less than 35 per cent, and not more than 49 per cent, of the enlarged Ordinary capital.

31/12/1977 – The Glasgow Herald – Merger of brickmakers –  Two major Scottish brick producers, Caledonian Brick and Scottish Brick have merged to form a new company.
The merger involves the acquisition by the new company of Fife based Caledonian from Aurora Holdings, which acquired the company when it took over the Coltness Group in August.
The consideration will be the issue of shares in the new company to Aurora, giving it a fifth of the share capital.
In the 9 months to September, Caledonian made profits of £54k. Net assets are worth £354k after providing $376k for deferred tax.
The value of Caledonian in Coltness’s accounts was £495k
Tagged with: Caledonian Brick Company, Coltness Brickworks Limited, Mayfield, Newmains Brickworks Morningside, Newmains Fireclay Works, Scottish Brick Corporation, Stepends