(Note – SBH –  Possibly the same business as the Caledonian Brickworks, Birkenshaw – to be confirmed. It is also difficult to decide on whether researched information related to the Newmains Brickworks or the Newmains Fireclay Works).

The Coltness Iron Co Ltd, Newmains, South Lanarkshire, Scotland, was established in the 19th century by Henry Houldsworth and his brother, Thomas. The brothers settled for the board and financial control, leaving the technical business of mining and metal making to competent managers. By 1922, the iron and steel interests of the business had been much diminished and the company concentrated on mining, appointing William Hamilton Telfer as general manager. Telfer came from a long family tradition of mine managers and had considerable mining experience in the Scottish coalfields. By this time, the company had already made strong connections with other important Scottish companies through shared directorships that were a great help to Telfer during the inter-war period. Following the general strike of 1926, Tefler urged the board to abandon coal iron making and the furnaces were dismantled. A programme of modernisation was then undertaken on the mining side of the business and new collieries were opened at Kingshill, South Lanarkshire, and Overtown, North Lanarkshire, even though the economic climate was unfavourable to such ventures. However, coal output steadily increased during the 1920s. The company’s position was made stronger through its link with the Wilson & Clyde Coal Co, colliers, Fife, with whom they purchased the business of James Waldy & Co, coal merchants of Edinburgh and Glasgow, Scotland, which provided a wide sales network for the coal produced. Telfer’s influence and success resulted in his appointment as managing director of the company in 1927 and he was able to influence the board to resisted the attempts to amalgamate coal companies through the 1930 Coal Miners Act.

It was clear that the company could not survive solely as coal masters and it was various diversifications that kept the company viable. Most notably, it was the success of the cement works at Newmains and the brick works at Carluke, South Lanarkshire, and Jordanhill, Glasgow, which provided the support for the colliery enterprise in this period.

The 1930s saw the acquisition of neighbouring collieries such as the Ardenrigg Coal Co Ltd, South Lanarkshire, in 1932 and the Darngavel Coal Co Ltd, North Lanarkshire, in partnership with the Wilson & Clyde Coal Co Ltd, Bellshill, Glasgow. In 1934, the company sub-let part of the coalfields of Stewart & Lloyds Ltd, Corby, England, near Rotherham, South Yorkshire, England, and purchased that company’s 35 per cent stake in Wilson & Clyde Coal Co Ltd. The Coltness Iron Co Ltd had previously moved into the Warwickshire coalfields at Kersley, near Coventry, England, in 1902, though the purchase of the Warwickshire Coal Co Ltd. This colliery had been unprofitable between 1911 and 1923, but Telfer re-organised the concern and made it profitable.

Telfer retired as managing director in 1936, becoming vice chairman although he continued as manager of the Warwickshire concerns which now including Kersley’s neighbouring pit, the Sandwell Park Colliery in South Staffordshire.

In 1937, the company acquired the Cumberland Coal Co (Whitehaven) Ltd at Whitehaven, Cumbria, England, at the suggestion of Telfer. The 1930s also saw the development of the company’s cement and brick works and the steel foundry was modernised and expanded into the production of non-ferrous metal in partnership with ICI as Scottish Non-Ferrous Tube Industries Ltd, Hillington, Glasgow.

The company expended some £800,000 on new developments between 1936 and 1941 without having to increase the companies share capital and during difficult economic conditions. As a result, Telfer was appointed chairman in 1941, a post he held until 1946. By then, Coltness Iron Co Ltd was one of the largest colliery concerns in Scotland and England, employing nearly 5,000 men in both countries with an output of 5 million tons. Telfer had overseen improvements in working conditions, miners welfare, housing and pit safety.

The National Coal Board acquired the company’s assets in 1947 when the company was nationalised under the Coal Industry Nationalisation Act 1946. The Coltness Iron Co Ltd became Coltness Holdings Ltd in 1946 in order to acquire the assets and capital not taken over by the National Coal Board and entered into voluntary liquidation in 1947. At the time of nationalisation, the company had pits at Blairhall, Douglas, Kingshill, Hanockrigg, Woodend, Gillhead, Greenhead, Overtown, Duntilland and Collyshot, all in Scotland.

c. 1934 – The 1985 publication ‘A survey of Scottish brickmarks’ suggests the Glasgow Iron and Steel Company Limited were the operators.

06/07/1947 – Sunday Post – Brick from Bings – Two disused pit bings at Harthill have been bought by the Newmains Brick and Tile Making Company. The Company’s directors have a hunch. They believe they can turn these mountains of waste material into honest to goodness bricks. Tests are now being carried out.  If their guess is correct, a brickwork will be erected in the district close to the bings (Eastfield and Balbakie No 1) with a good access for transport on the nearby railway and the Glasgow to Edinburgh Road. It is estimated materials are sufficient to give employment to a large number of men for 30 years. Negotiations for the purchase were carried out by a director Mr John Halliday and Councillor T Cunningham of Harthill. 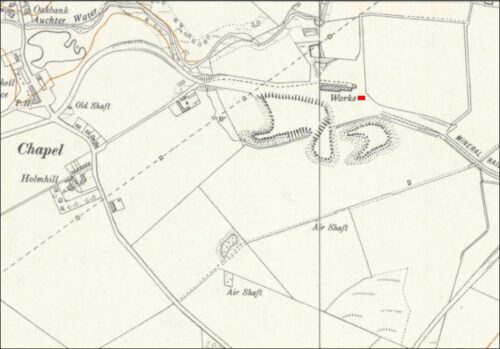 1960s – 1978 – The 1985 publication ‘A survey of Scottish brickmarks’ suggests the Caledonian Brick Company were the operators of these works during this period.

22/05/1964 – Wishaw Press – Change of title for Coltness Iron Company. New company to boost brick production. Bold new plans for the future are announced this week By the Coltness Iron Company Ltd. The plans, aimed at putting the company in the forefront of Scottish industry, include a change of title, the formation of a new company to handle sales, the switch of headquarters from Newmains to Glasgow and a 75 per cent increase in brick production at the Morningside, Airdrie and Carluke brickworks. The ” meet the future ” plans were announced at a Press Conference, which followed an extraordinary general meeting of the company, held in the Central Hotel, Glasgow, last Friday. Company chairman, Lt. Col. J. F. H. Houldsworth, announced the change of name. After 127 years the old title Coltness Iron Company Limited goes out. The new company title is COLTNESS INDUSTRIES LIMITED. A new company, Coltness (Sales) Ltd. has been set up to handle all the sales of Coltness Industries and group headquarters are to be moved from Main Street. Newmains, to a new building which is almost complete, Clive House, India Street, Glasgow. Brick production at Chapel Brickworks, Morningside, Mayfield Brickworks, Carluke and Stepends Brickwork Airdrie is to be stepped up by 75% which should result in the production of over one million bricks a week. The step-up in production has meant an investment of £150,000 by the company in new machinery. The plans will mean an additional 30 jobs at the Chapel Brickworks, Morningside, where a new kiln is being built and where production is expected to bump from 130,000 to 420,000 bricks a week in August. Referring to the change of name of the company Col. Houldsworth said: ” This is a natural step to take, especially as the company is no longer identified with iron and steel foundries or, indeed, coal mining although we are still proud to be of service to the N.C.B. through our subsidiary company, Beckett & Anderson who manufacture mining equipment.” Col. Houldsworth continued “We are now a well-diversified Scottish industrial company with widespread interests on Clydeside, in Stirlingshire and Lanarkshire manufacturing bricks, nails, central heating, mining haulage and marine winch equipment. Our total assets are over £1 million. We employ 400 people and we hope before long that through growth, development and diversification, we shall employ many more. I believe all the changes underline our belief in the future and our intention to think far ahead and plan accordingly”. Concluding, Col Houldsworth said,” I hope that what I have said indicates that Coltness Industries Limited are today 127 years young. We intend to keep it that way and we intend to play our part in the life and prosperity of Scotland. Coltness Iron Works were founded at Newmains, in 1837. In 1899 Coltness Iron Company became a public company. By that date, in addition to nine blast furnaces and iron and steel foundries, the Company owned 20 coal mines and pits in the counties of Lanark, West Lothian, Fife and Midlothian.
By 1930 the Company’s coal mining interests had spread to West Cumberland and Warwickshire. Following the nationalisation of the mines on 1st January 1947, the Company was left with its iron and steel foundries, brickworks and blast furnaces and cement works. Since then the management has sought expansion by diversification in various directions through the parent company and its subsidiaries. In 1947 the Mayfield Brickworks were built at Carluke and the following year Beckett & Anderson became a wholly-owned subsidiary. In 1950 Newmains Brickwork company was purchased and during 1952 the iron and steel foundries were sold. Eight years ago J. & W. Somerville became a wholly-owned subsidiary. In 1963 the blast furnace, cement works closed.
23/04/1965 – Wishaw Press – Coltness Brickworks, Newmains. Labourers required at Chapel Brickworks, Morningside, Newmains. Apply direct to the general manager at the brickworks. 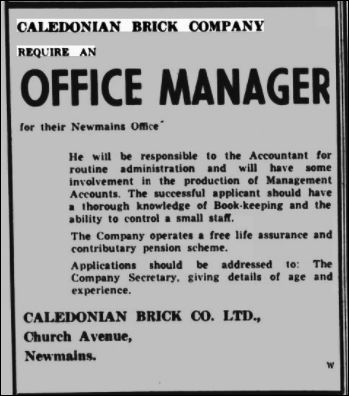 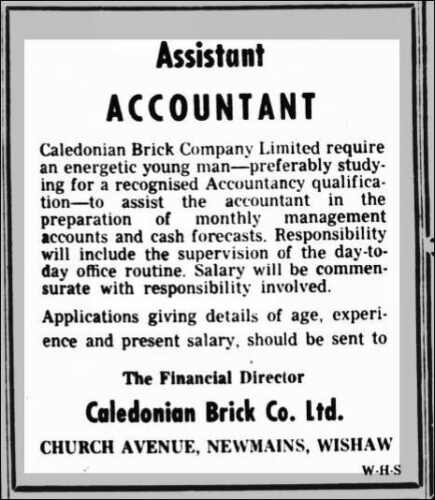 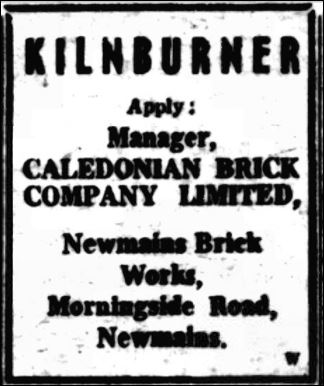 1978 – 1980 – The 1985 publication ‘A survey of Scottish brickmarks’ suggests the Scottish Brick Corporation were the operators during this period.