To the east of the Colzium Lennox estate are Banton Loch and the village of Banton, with its historic Swan Inn. The area formed the site of the 17th Century Battle of Kilsyth and was latterly known for its Victorian brickworks, samples of which are in the museum.

01/04/1893 – Falkirk Herald – In Denny district, a good deal of brick works is also being done in connection with extensions to papermills as well as for private work but Bonnybridge and Banton brick works supply the bulk of what is needed there.
Below – 1896 – Banton Brickworks. They are marked as disused on the 1913 map. 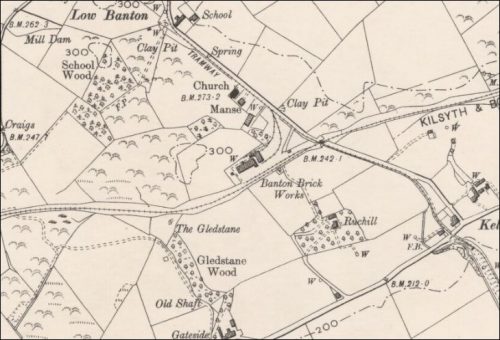 06/06/1896 – Falkirk Herald – Banton … at the brickwork, a comparatively new industry in the district, a briskness is also discernible. New machinery is being introduced by Mr Cadell, the proprietor for the purpose of utilising the bed of clay adjacent to the work and it is thought that by mixing this clay with the shale now used, a much finer class of brick will be produced … (Note – SBH – This is a somewhat confusing entry given the 1896 map states the Banton Brickworks were by then disused?)
10/03/1900 – Kilsyth Chronicle – The Banton right of way court case … James Millar, 34, manager of Banton Brickworks, tenant Ruchill House for four years, had been brought up in the district. Since coming to Ruchill he had never seen any trace of path north of the wood at the house, but he had seen a trace of the path inside the wood. Since the dispute arose he had seen Mrs Myles and her daughter on the north side of the hedge. He went up and down six times a day to the brickwork and never saw anyone going by the road outside the policy except these two. The brickwork was erected Mr Cadell after the railway was made …
24/03/1900 – Kirkintilloch Gazette – Death of Mr James John Cadell on 20/03/1900 at Carron Park, Larbert … He succeeded his father in the ownership of Banton and other properties some twelve years ago. With the view of utilising the waste material which had accumulated in connection with coal workings and to give employment in the district, Mr Cadell started the Banton Brick Works, which, under his fostering care, have greatly developed …
13/07/1901 – Falkirk Herald – Banton compensation case. Last week at Stirling Sheriff Buntine heard evidence in a further action in the instance of Annie Cairns, brickworker, High Street, Kilsyth, against the Banton Brick Company, under the Workmen’s Compensation Act. The pursuer in February last, as a consequence of an action against the defenders, was awarded the nominal compensation of one penny weekly in respect of an accident the brickwork. Since then the girl made an effort to resume work and was found to be suffering from anaemia The pursuer last week endeavoured to show that her illness was attributable the accident, and that was thus entitled to increased compensation. His lordship repels the pursuer’s plea, and in his note says: By the 15th February last, I found that at the time the pursuer’s wage-earning had not been diminished by the injuries she had sustained in the defender’s employment and accordingly I fixed a nominal sum of compensation. This sum may be increased whenever the pursuer can show her capacity has been diminished in consequence of these injuries. It appears from the evidence led today that the pursuer returned to her work with the defenders at the same wage on 18th February last and remained in their employment till 10th April last. She was not dismissed, but gave up working, because, she says, she was not able for it. The medical evidence shows that she now suffering from anaemia, and that manual work of any kind will be injurious to her health. I have come to the conclusion that she has failed to prove that her present illness, which undoubtedly injurious affects her wage-earning capacity, is due to any extent, to the injuries she received a year and a half ago, or to the surgical operation which she had then to undergo. Is is to be hoped that with time and rest and treatment the pursuer’s health may improve and that she may be able to return to work, but meantime, in my opinion, she has no claim under the Workmen’s Compensation Act for compensation from the defenders.
17/06/1904 – Kilsyth Chronicle – The employees of Banton Brick Company to the number of about 50, on Saturday, journeyed by rail from Dullatur to Portobello where, in excellent weather, they spent a most enjoyable day.
Tagged with: Banton, Cadell