19/11/1859 – Edinburgh Evening Courant  – The Royal Society of Arts. Annual General Meeting. The report of the Prime Committee was read for 1858 – 1859 and the following prizes awarded.  – To Mr Henry Cadell, M.E Grange, Bo’ness for his “description of an improvement in the construction of brick kilns for economising fuel and prevention of smoke” with a drawing. Read and exhibited 11/04/1859  – The Society’s silver medal and plate, value 5 sovereigns.

11/03/1891 – Falkirk Herald – Mr HM Cadell sells a plot of land at Grangepans for the erection of the new “Co-operative Pottery”. A previous pottery was also established at Grangepans in 1887.

Below – 1895 – Bridgeness Pottery. A possible location for the Grange Brickworks. 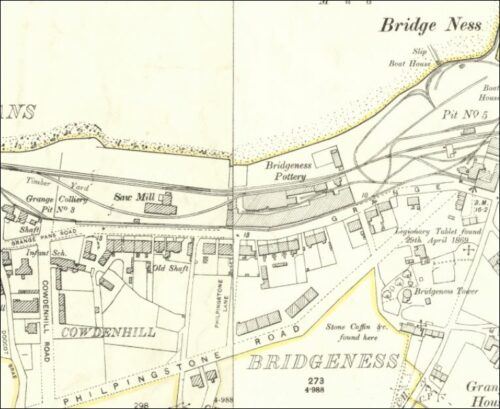 01/04/1921 – Linlithgowshire Gazette – The commercial possibilities of the Forth Valley. Interesting article by Mr H. M. Cadell of Grange … Valuable fireclay seam. Besides coal, the mineral resources include fireclay of excellent quality, at present mined on a comparatively small scale on the east side of the Avon Gorge between Kinneil and Manuel. Fireclay is a common enough substance in the carboniferous formation, but generally, it occurs in an impure condition mixed with ironstone nodules, which being fusible destroy that commercial value of the clay as a refractory material. But here the seam or large part is quite pure and of high commercial value, and as it no doubt extends over a far larger area than has been opened up, it presents considerable commercial possibilities. It occurs in the part the carboniferous formation above the Bo’ness coal series, known geologically as the Millstone Grit, and in this same position, it has long been successfully mined and manufactured into firebricks, retorts, etc., at Glenboig and Gartcosh in Lanarkshire, and Castlecary and Bonnybridge in Stirlingshire. Fireclay is, however, also largely used for making drain-pipes and sanitary goods as well as for white building bricks, but whatever its use its degree of purity determines its commercial value. Before the war, it was sometimes exported in the raw state to places on the continent where good fireclay was in demand and not procurable locally. The seam in the vicinity of Bo’ness and the Avon is about 40 feet thick, in different beds, some of which are of high quality, and probably in a quantity that, will satisfy a large demand for many years to come.

Of really good brick clay there is unfortunately not much that is easily accessible under the carse lands. The old mud or carse clay is of course abundant, but it is generally of a nature quite unsuitable for good brick making. A bed of excellent red or brown brick clay occurs some distance below the carse clay, but generally at too great a depth to be workable. At Inverkeithtog, however. this red glacial day has recently been found on the surface very thick and pure in the bed of the Keithing Burn below Pitreavie, and good bricks have been made from it for use at Rosyth. This clay is particularly suited for earthenware goods, flower-pots, etc.

There are several good seams of limestone, both at Charlestown, Fife, where it has long been mined, and in smaller quantities at other places. Portland cement has in recent years greatly superseded lime for building and owing to its strength and quick setting qualities it has notable advantages. For some reason, not easily understood, the building lime that has been sold during the last fifteen or twenty years in the district has not the strength of the lime of former generations and generally crumbles away after a few years time instead of setting durably. Portland cement is made in the first instance by burning limestone mixed with clay mud, of which latter there is an abundant local supply. If limestone could be mined sufficiently cheaply, a new cement industry might be established, since the demand is great and the local price very high. Coal is at hand, and the heavy freight from the chief cement works near the Thames would saved. But the soft chalk of England is far more easily worked than hard Scottish limestone, and the mining industry in this country is so hemmed in with Government restrictions and handicapped with short hours of work and wage conditions, that there is no immediate prospect of sufficiently cheap production of limestone to make it a feasible subject at present. By and by, if undue State interference in all such industrial matters were to be removed, there might be some prospect of economic development, but in the existing circumstances it cannot be said that the time has arrived for us to attempt much that is likely to be useful in this direction.

Mr Henry Cadell of Grange and Banton, was the chief of a family which for more than a century has been associated with the iron industry of Scotland. He was a grandson of William Cadell, of Banton, in Stirlingshire, who, in partnership with Dr John Roebuck and others, established the Carron Ironworks in 1760, and held the post of managing partner during the first twenty struggling years of the life of that celebrated concern.

The late Mr Cadell was born on his paternal estate of Grange, near Bo’ness, in Linlithgowshire, in 1812, and received his education in Edinburgh. He was for many years engaged in coal and ironworks in Fife and elsewhere, and acted as the manager to the East of Scotland Malleable Iron Company at Dunfermline for some time. He was afterwards appointed as manager of the Duke of Buccleuch’s Dalkeith Collieries; and his skill and energy, inherited from his enterprising ancestors, enabled him to turn the balance, and convert what had hitherto been a losing concern into a prosperous business. In 1855, he left Dalkeith to reside at Grange and spent the rest of his life in working the minerals on his own estate, to which he succeeded on the death of his father in 1858.

In 1862 his energies were spent in erecting on his property the Bridgeness Ironworks, where the black- and clay-band ironstone from Grange was smelted for some time. The works, however, did not turn out so remunerative as he had expected and were discontinued for about ten years. One of the two furnaces was again blown in, when about 1872 the good times for ironmasters once more came round. When prices began to decline, however, the furnace was again blown out, and it has not since been in operation.

Mr Cadell had an inventive and mechanical turn of mind, and he published the results of his experiments in various periodicals and papers. Among his inventions was an improved graduated steelyard, made in 1856, which gave absolutely correct readings from zero upwards. He also introduced improved kilns, which were used with advantage in his own brickworks and elsewhere. Several of Isis papers were published in the Proceedings of the Royal Scottish Society of Arts and were awarded prizes by the Society, which, in 1880, elected him as president. The last paper he wrote was a description of a method of preventing the deposit of silt in harbours, and for this, he received the Society’s honorary silver medal in 1885.

Mr Cadell was a very worthy and public-spirited “laird” of the old school and was much esteemed by the tenants and work people on his estates, to whom he had long been a kind-hearted and indulgent landlord and employer.

The family name was originally spelt Caddell, but in the 18th century one ‘d’ was dropped. However, it is still pronounced with emphasis on the first syllable; thus Cadell rhymes with paddle!
Henry Cadell of Grange was a mining consultant and industrialist who had acquired considerable geological knowledge of the Lothian coalfields. Indeed, in the 1850’s he had provided Archibald
Geikie with geological information about the Bo’ness area that was incorporated into the initial survey map and memoir for Edinburgh and the Lothians. He favoured and fostered economic development of the hinterland to the River Forth and managed the Bridgeness Coal Company that held interests in coal mining, iron foundries, iron ore mining, salt pans, timber, agriculture
and pottery manufacture. The wealth of the large Cadell family was based mainly on industrial enterprises that started initially with iron-ore smelting at Cockenzie and continued with the establishment of the Carron Iron Works in 1759. In the late 18th and early 19th century, the Cadells of Grange were the senior branch of the family and owned considerable estates in Linlithgowshire and Stirlingshire and several collieries. Source
Tagged with: Banton, Cadell, Grange Fire Brick Co