Many thanks to Ian Green and Jill Williams, Edinburgh for their outstanding assistance with regards information relating to these works.

1841 – Jacob Kemme is now aged 50. The 1841 census finds him living at Newfarm, Dalkeith, with the title “Superintendent of Brick Work”[sic]. Within the Newfarm building complex, Jacob lives in one building with his wife Martha and his daughter Elizabeth. A second building holds “Tyle maker” Thomas Dobson with family; “Tyle burner” John Scott; and labourer Alexander Boyd whose family includes 3 other labourers, the youngest aged 13. A third building holds agricultural labourer Thomas Darling and family. There may be others, as the page ends at that point. [Adult ages were rounded to the nearest 5 years, which is why Elizabeth shows as 20. Her actual age is 22.] At the adjacent Smeaton Tile Works, one building is occupied by labourer John Scott and family.

28/01/1847 – Fife Herald – Jacob Kemme gave evidence at the hearing between Methven and the Railways. His evidence is detailed thus: Jacob Kemme, brick and tile maker in Granton is the manager of the Duke of Buccleuch’s Tile Works at Smeaton.  He pays £44.10s a year for his clay field and was entitled to make 800,000 bricks and tiles, he used about 2000 yards a year which made the rent about 6d a yard.  The deduction for the building would be 4d or 41/2d … His profit on 1000 bricks was 6s 9d, on house tiles 22s 6d, on drain tiles 6d … Note – SBH – This 1833 map reveals that the Duke owned lands at Granton hence his brick and tile interests there).

02/05/1849 – North British Agriculturist – … In Scotland, even where stone of the very best quality is abundant, the manufacture of bricks is rapidly on the increase; and, strange as it may appear, notwithstanding the heavy excise duty on them. houses, garden walls, &c., can be built in many parts of Scotland cheaper of bricks than of stone. We take some credit to ourselves for improving the quality of bricks prior to 1839, when, through the liberality and anxiety ever evinced by the Duke of Buccleuch, for introducing improvements into his native country, we brought English brickmakers and bricklayers into Scotland. It is a notorious fact that, up to that period, there was not a brick of proper mould or quality to be had in this country. The example shown at Smeaton and at Granton has rapidly spread through the country; and although railway contractors are perhaps less particular in the selection of the bricks used for tunnelling, &c., than they ought to be, still the demand arising out of railway operations gave an additional stimulus to our previous exertions. Scotland has hitherto not been a brick consuming country, on account of the abundance of stone; and as bricks, unless for the purpose of building garden walls, were chiefly used for interior work, little care was bestowed either on their form, uniformity of size, or sufficiency of burning. The demand is, however, on the increase, and such being the case, and no great probability of the Government reducing the excessive duty on them, it becomes a question of considerable importance, how, and by what means, they may be manufactured so that the consumer may have them at less cost, and at the same time securing the maker from an infringement of the existing laws …

1851 – Census – On the day of the 1851 census, Jacob and Martha happen to be visiting Elizabeth and William, whose home is now at Edgbaston. Jacob describes himself as a “Master Brick & Tile Maker Employing 14 Men”. 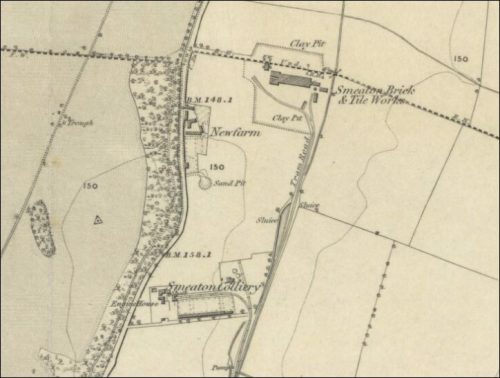 Below – A close up of the works. 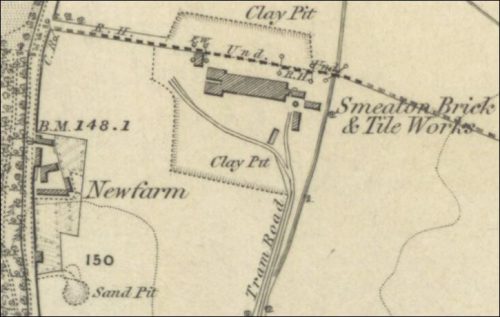 1852 – 1853 – ScotlandsPlaces –  Smeaton Brick and Tile Works – An extensive manufactory of bricks and tiles on the lands of Smeaton on the property of the Duke of Buccleuch and under the superintendence of Mr H Caddell. (Henry Caddell of Grange and Banton? – click me).

17/04/1858 – Teviotdale Record and Jedburgh Advertiser – Messrs Burn and Sons, coal merchants, Jedburgh … Agents for brick and tiles manufactured at Smeaton Works and will be glad to furnish prices and all particulars … 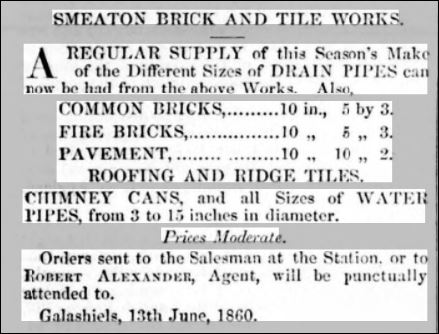 15/11/1861 – The Scotsman – North British Railway – Monktonhall and Ormiston and Dalkeith branches. New railways from North British Railway at or near Monktonhall to farm steading of Smeaton in Inveresk Parish hence to Macmerry and Hardengreen; land for station etc, new capital etc and amendments of Act – Notice is hereby given that application is intended to be made to Parliament in the next session for an Act to authorise the North British Railway  Company to make and maintain the following railways with all proper stations, works and conveniences … and it is proposed by the said intended Act to take powers to deviate from the line and levels of the proposed railways as laid down upon the plans and sections hereinafter mentioned, and to purchase by agreement the private tramway of the Duke of Buccleuch leading from Dalkeith to Smeaton Brick and Tile Works and to appropriate the site of all or parts thereof for the purposes of the intended undertaking and to purchase by compulsion certain lands in the Parish of Inveresk … 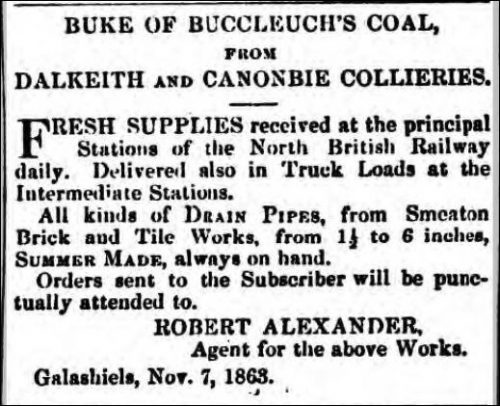 07/03/1879 – The Scotsman – Brickwork  – To let on lease, brickwork near Edinburgh constructed to make 16,000 to 20,000 bricks per day. The engines, grinding mills, drying sheds and kilns are of the best description and specially designed to save hand labour and to economise fuel. There is a large field of lay adjoining the work and railway siding and connections to the various parts thereof. The use of a locomotive can also be provided. For further particulars apply to ‘S’ care of Keith and Co, 65 George Street, Edinburgh. (Note – SBH – Could the ‘S’ refer to Smeaton?)

Archaeology Data Service  –  2012 – 2014 -See section 10 for a cracking read on the excavations carried out at the Smeaton Brickworks and its history. They detail – The brick and tile works are first recorded on an engineer’s plan dating to c 1840 (NAS RHP23122) depicting subterranean splint coal deposits.

Below – Date unknown – A small card detailing the products made at Smeaton. 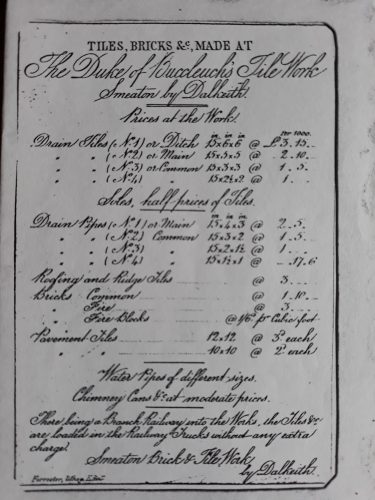 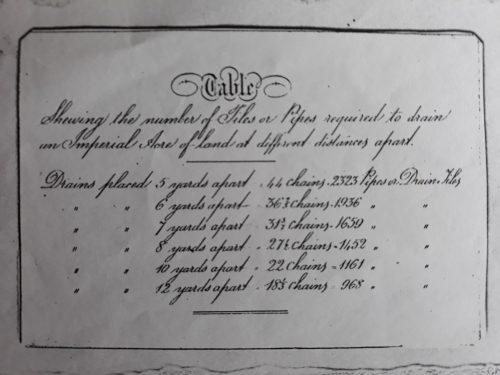