Coal has been mined in the Sanquhar and Kirkconnel area since earliest times.  In the late 1700s the Duke of Queensberry began to develop the coalfields on his estate, and in 1792 Sanquhar Town Council set up a mine to supply the townspeople with coal.  At this time the mines were not major employers, with only 40 miners in Sanquhar and 16 in Kirkconnel recorded in the ‘First Statistical Account of Scotland’.

In the early 19th century coal was mined in the parish of Sanquhar from shallow and easily accessible seams.  In 1848 the first deep pit at Gateside was sunk, and another at Bankend opened in 1857.  The New Gateside Pit was opened in 1891, and five years later Fauldhead Pit, the largest in the coalfield, was commissioned. In 1903 the coal works, by now the largest in private ownership in Scotland, became a limited company, ‘The Sanquhar and Kirkconnel Collieries Limited’.  Tower Pit was sunk in 1916, despite wartime shortages, and by 1925 over 2,000 miners were employed in the industry. Fauldhead Colliery at Kirkconnel was easily the largest pit in Dumfriesshire

The mines were nationalised in the wake of the Second World War, and shortly after taking control, the National Coal Board developed two drift mines, Rigg and Roger.  The 1960s brought a decline in the industry, and although its coal reserves were predicted to last into the 21st century, Fauldhead closed in 1968 – 69.

1962 – The Upper Nithsdale Coalworks from Pictish Times to 1925. Compiled by J C L McConnel – Brickmaking. About 1912, a brickworks was started at the Fauldhead Collieries, Kirkconnel as the increasing demand, both for housing and for colliery purposes, could not be met from Sanquhar. This works utilised clay and shale produced during mining operations and had a high carboniferous content. Once burning had been started, the bricks burned themselves. This type of brick is known as a composition brick, not being a true clay. Every 1000 Sanquhar bricks required from 15cwt to 24cwt of coal to burn them, but composition bricks could be burned by as low as 4cwt per 1000. During the works most active period, machinery capable of producing 40,000 bricks a day was installed.

c. 1912 – A brickworks was opened at Fauldhead Collieries by Sanquhar & Kirkconnel Collieries Limited. The National Coal Board took over in 1947 and the works remained in production until a few years after the closure of the colliery in 1969.

08/04/1921 – The Scotsman – Harmony in Dumfriesshire – A spirit of harmony prevails in the Sanquhar and Kirkconnel districts. The staff and clerks are managing to keep the mines clear. Other industries are, however, beginning to feel the effects, and a considerable number of men and women have been compelled to cease work at the local brickworks for the lack of fuel. This is regrettable, as there is a great demand for bricks. This stoppage will affect the progress of the local housing scheme. 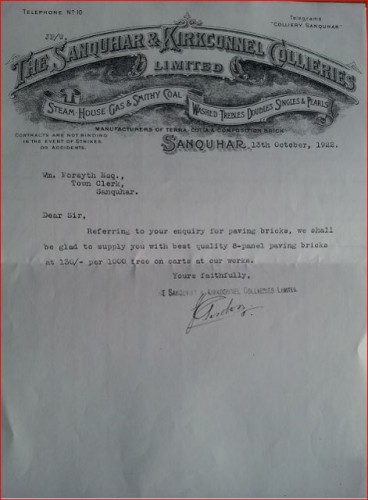 11/02/1924 – The Scotsman – … It is interesting to state that it is exactly 100 years since the grandfather of the chairman of the Sanquhar and Kirkconnel Collieries ( Limited ) procured a lease of the minerals from the Duke of Buccleuch and Queensberry, and without a break, the family have continued to operate on the coal seams and the fireclay utilised in connection with the brick, tile, and terracotta works.

1931 – 1947 – Brick, Tile and Fireclay Industries in Scotland RCAHMS – The Baird and Dalmellington Iron Company Limited ran the Buccleuch Terracotta Works. (Note – SBH – I would imagine this included the Fauldhead Colliery Brickworks and the Sanquhar Brick and Tile Works)

Below – 11/07/1931 – The Scotsman – New Scottish merger – Coal and iron interests. The Dalmellington Iron Company take the Sanquhar and Kirkconnel Collieries from William Baird and Co. 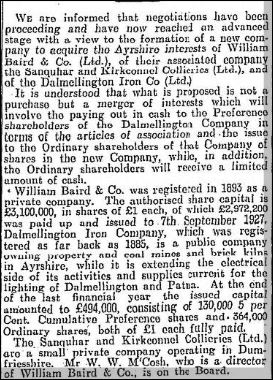 03/10/1934 – Kirkintilloch Herald – Plans passed. Among the plans passed by the Public Health Committee were those for … Fauldhead and brickwork, offices, etc., for Wm. Baird &Co.