Many thanks to Ian Green and Jill Williams, Edinburgh for their outstanding assistance with regards to information relating to these works. The references below come mainly from census and valuation roll entries.

1844 – There is a Jacob Kemmie (Kemme) listed as living at Granton Pier, which at that time was part of Cramond, but later just called Granton. He is associated with an unnamed brickworks.

14/03/1844 – Fifeshire Journal – Highland and Agricultural Society monthly meeting … Specimens of flooring tiles were presented from the Duke of Buccleuch’s Tilework at Granton by Mr Hawkins, the resident engineer there …

28/01/1847 – Fife Herald – Jacob Kemme gave evidence at the hearing between Methven and the Railways. His evidence is detailed thus: Jacob Kemme, brick and tile maker in Granton is the manager of the Duke of Buccleuch’s Tile Works at Smeaton.  He pays £44.10s a year for his clay field and was entitled to make 800,000 bricks and tiles, he used about 2000 yards a year which made the rent about 6d a yard.  The deduction for the building would be 4d or 41/2d … His profit on 1000 bricks was 6s 9d, on house tiles 22s 6d, on drain tiles 6d … (Note – SBH – This 1833 map reveals that the Duke owned lands at Granton hence his brick and tile interests there).

02/05/1849 – North British Agriculturist – …  In Scotland, even where stone of the very best quality is abundant, the manufacture of bricks is rapidly on the increase; and, strange as it may appear, notwithstanding the heavy excise duty on them. houses, garden walls, &c., can be built in many parts of Scotland cheaper of bricks than of stone. We take some credit to ourselves for improving the quality of bricks prior to 1839, when, through the liberality and anxiety ever evinced by the Duke of Buccleuch, for introducing improvements into his native country, we brought English brickmakers and bricklayers into Scotland. It is a notorious fact that, up to that period, there was not a brick of proper mould or quality to be had in this country. The example shown at Smeaton and at Granton has rapidly spread through the country; and although railway contractors are perhaps less particular in the selection of the bricks used for tunnelling, &c., than they ought to be, still the demand arising out of railway operations gave an additional stimulus to our previous exertions. Scotland has hitherto not been a brick consuming country, on account of the abundance of stone; and as bricks, unless for the purpose of building garden walls, were chiefly used for interior work, little care was bestowed either on their form, uniformity of size, or sufficiency of burning. The demand is, however, on the increase, and such being the case, and no great probability of the Government reducing the excessive duty on them, it becomes a question of considerable importance, how, and by what means, they may be manufactured so that the consumer may have them at less cost, and at the same time securing the maker from an infringement of the existing laws .. 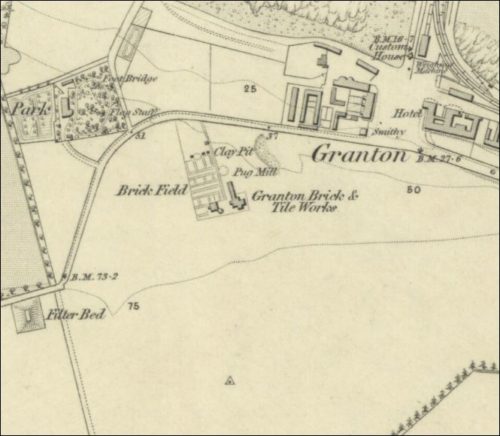 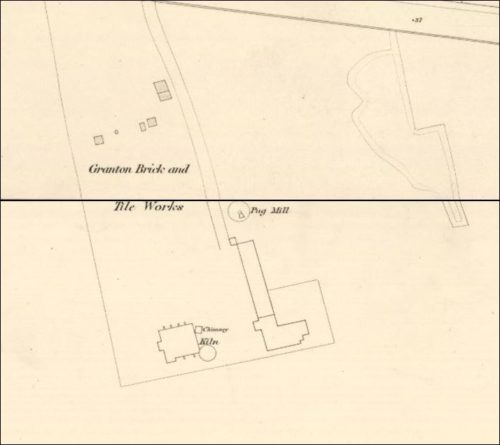 1852 – 1853 – ScotlandsPlaces – Granton Brick and Tile Works. This name applies to a brick and tile establishment a short distance South West of Granton and employs about 10 men. Occupied by Jacob Rennie (Kemme) the property of the Duke of Buccleuch.

10/11/1859 – The Scotsman – Bricks. Good composition bricks and also fire brick and fire clay can be had at Granton Pier or Leith. Apply to Mr Alex Wilson, contractor, Granton Villa. (Note – SBH – I am uncertain if this relates to the Granton Pier Brickworks or it may be a merchant operating from the pier. Added to this page meantime).