Below – 09/04/1863 – Southern Reporter – Trial for culpable homicide – James Davidson, Pitmanhead at Newbattle Colliery on trial and thereafter found not guilty. 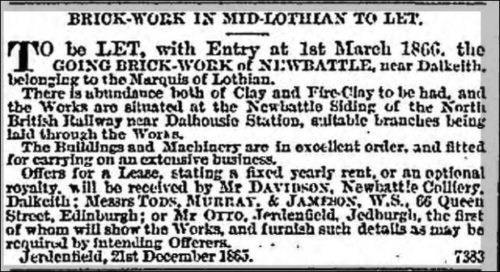 1866 – Frederick Jacob, bricklayer and furnace builder, Wardie Avenue, Ferry Road and at Newbattle, Dalkeith. (Note – SBH – Is the reference to Newbattle a reference to Jacob being involved with Newbattle Brickworks after its sale 1865/66?).

1867 – The most noble, The Marquis of Lothian – Newbattle Colliery. Jas Davidson Manager and Mining Engineer.

22/05/1869 – Edinburgh Evening Courant – reference to the workmen of Newbattle Collieries and Brickwork, employed by the Marquis of Lothian per J Davidson Esq, Manager donating £55 18s 10d to the rebuilding of the Royal Infirmary Edinburgh.

27/04/1874 – Shields Daily Gazette – Fatal stabbing affray – On Saturday night, a man named William Armstrong, a workman at Newbattle Brickworks, was fatally stabbed at a village about 2 or 3 miles from Dalkeith during a drunken fight. He died shortly after the assault. Four men were apprehended. A knife marked with blood was found in possession of one of them. Armstrong was about 20 years of age. and this more expansive report – Edinburgh Evening News and The Paisley Herald 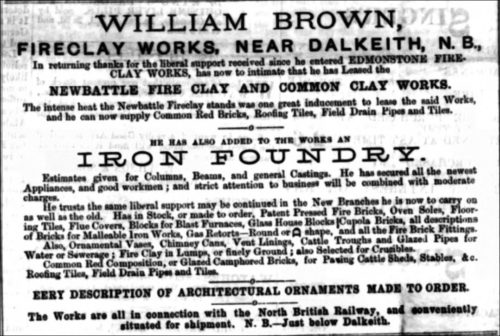 28/02/1877 – Glasgow Herald –  Clerk – Wanted, a person that has been amongst fire clay works. State wage expected and give a reference. Wm Brown, Newbattle Fire Clay Works, near Dalkeith.

25/09/1884 – Aberdeen Press and Journal – At the High Court of Justiciary yesterday, Manuel Collins pleaded guilty to stealing several articles of wearing apparel from a both at Newton Grange Brickworks, Newbattle and was sentenced to 7 years penal servitude.

24/03/1887 – Dalkeith Advertiser – Garden flower vases. Various sizes and designs to be had at Newbattle Brickworks.

04/06/1887 – Glasgow Herald –  01/06/1887 – George William Brown, tenant of Newbattle Fire brick works, near Dalkeith in the County of Edinburgh and carrying on business there, as a brick and fire clay manufacturer in his own name and also under the name or style of William Brown & Sons. Creditors to meet in Lyon & Turnbull’s Rooms Edinburgh on 10/06/1887 at 12 noon …

28/06/1887 – Glasgow Herald –  Edinburgh bankruptcy court – At this court yesterday, George William Brown, brick manufacturer, Newbattle Fire Brickworks near Dalkeith was examined in bankruptcy. In reply to Mr Munro, CA, trustee, bankrupt stated that he began a business on 01/10/1883, in company with his brother William. They purchased the business from their father and when the transfer was made their father was deficient to the extent of £1350. The business had been profitable in former years but the bankrupt’s father made a heavy loss in connection with an iron foundry. His father went abroad and his brother left the firm and went abroad about 12 months later. The firm was never formally dissolved, and there was no deed of copartnery, though it was understood each was to have an equal share of the profits. The business had been a profitable one since he took it over, but he had heavy liabilities in connection with his father’s estate and this and the want of capital had contributed to his present difficulties. The rent of the brickwork averaged about £280 a year and the turnover averaged about £3500 a year. His immediate cause of stoppage was creditors pressing for payment and bad debts. The state of affairs showed liabilities amounting to £1009 16s 4d and assets £315 leaving a deficiency of £694 16s 4d. The statutory oath was administered by Sheriff Hamilton.

10/05/1892 – Glasgow Evening Post – Fatal Accident in Dalkeith – while at work at Newbattle Brickwork yesterday, John McCabe was crushed between the buffers of two waggons. He expired shortly after being taken to his home in Dalkeith. 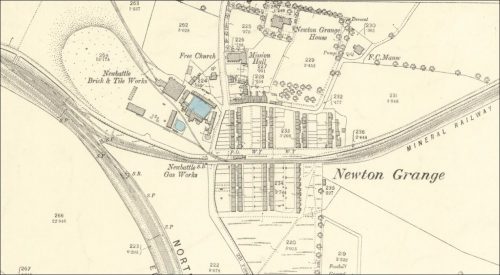 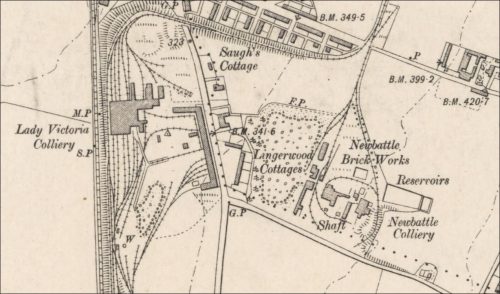 c. 1910 – 1947 – The 1985 publication ‘A survey of Scottish brickmarks’ suggests that the Lothian Coal Company were the owners or operators around this time. 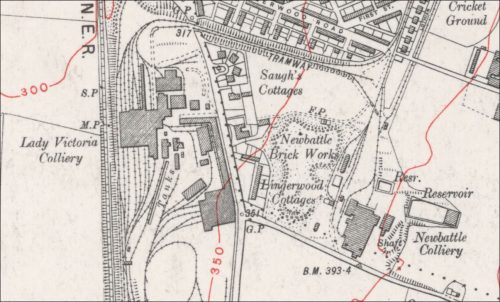 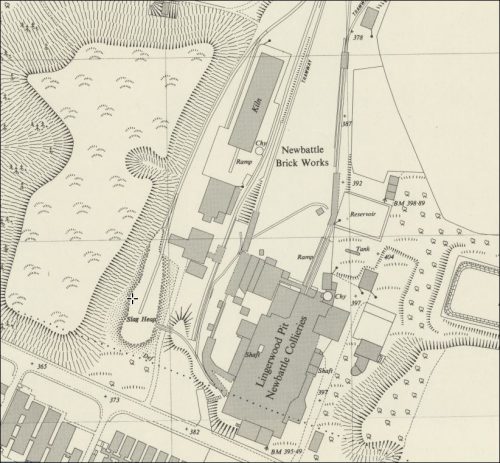 1947 – The brickworks were taken over by the National Coal Board.

Below – The following products were found in the same building as the Newbattle 1862 bricks and are believed to be products of the works although they are not marked.

Below – An unmarked frogged building brick. 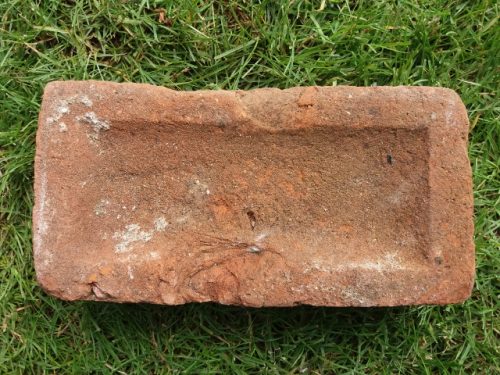 Below – An unmarked roof ridge tile made from fire clay 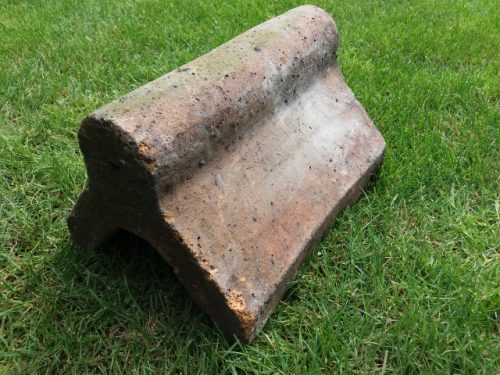 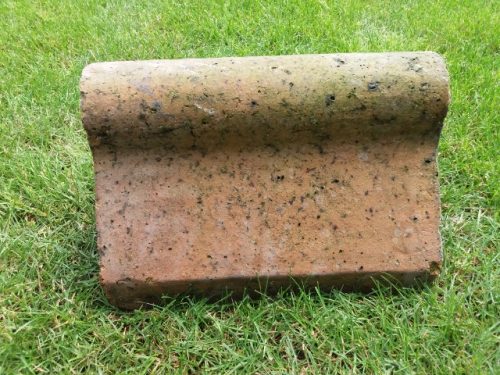 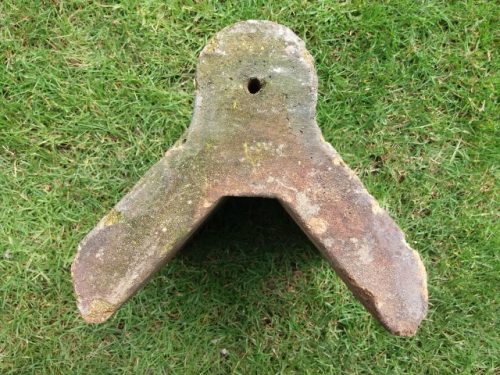