Brickworks – Located between No.1 and No.3 pits, the Wallyford Brickworks were part of the NCB’s operations from 1924-69 (Bourhill, p9). The works were then sold to the Scottish Brick Corporation; they closed in 1972 when employee numbers were c.30.

James Burns was the manager at the brickworks from 1960 – 1972; in an otherwise undated and unattributed document held at Musselburgh Library, he described the process of brickmaking at Wallyford:

‘The red clay ‘blaes’, a poor quality clay, was brought in from various coal mines by rail and deposited outside. It was uplifted by a mechanical shovel (Chayside) onto a conveyor belt, then fed into the crusher. The crusher broke the clay into pieces about 3″ in size. From there it was carried up into the mill where it was ground into dust and then put through a screen. This dust was mixed with water in the ‘brick machine’. It was now ready to be pressed into bricks.

The brick table had 16 moulds around the outside. As the press came down into the mould, it formed the brick shape and printed ‘Wallyford’ on the brick. It was then pushed out as the table revolved and loaded onto a pallet by hand. Each pallet held 398 bricks, which were stacked into the kiln by forklift, but the last few pallets were stacked in by hand. The kiln entrance was then bricked up with ‘burn’ bricks and plastered with a mixture of sand and clay to make an airtight seal.

The kiln was gradually fired to a temperature of 1000º. This allowed the bricks to dry out first, before baking, preventing them from cracking. The whole process took around 11 days.

Wallyford had one continuous kiln which held around 11,000 bricks, and four square ‘intermittent’ hand-fired kilns which held between 25-30,000 bricks.

The bricks were transported by rail or lorry to wherever they were required. Over the space of time, Wallyford bricks were used in many buildings including some of the Boggs Holdings in Pencaitland and Wallyford Miners’ Institute’.

Located on the old brickworks site, the Wallyford Industrial Estate was established by the East Lothian District Council. Now run by East Lothian Council, by 2000 it provided accommodation for a range of businesses. These included ventilation contractors, car paint and lacquer suppliers and manufacturers, scrap metal merchants, floral and plant display and steel fabricators and erectors. Source

11/09/1872 – The Scotsman – Wallyford Colliery and Brickworks near Musselburgh. Sale of the extensive and valuable colliery plant machinery etc on 03/10/1872. Lyon and Turnbull respectfully intimate that they have received instruction to realise the whole of the valuable engines, machinery, stores, working plant, railways and other effects belonging to a sequestrated estate. 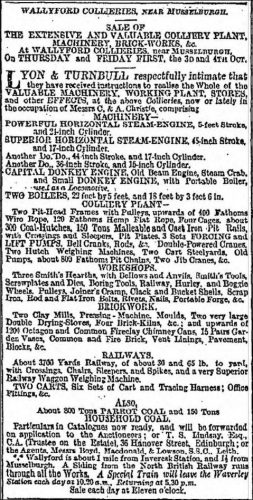 14/02/1873 – The Scotsman – Stealing a ton of iron … Bernard Conolly and Alexander Thomson, labourers were charged with theft. The prisoners on various occassions between 6th October last and 15th ult. carried off from the Wallyford Colliery and Brickworks, near Inveresk a ton of old metal … sentenced to 30 days imprisonment each.

c.1924 – 1947 – The 1985 publication ‘A survey of Scottish brickmarks’ suggests that the Edinburgh Collieries Ltd operated these works during this period.

09/06/1932 – The Scotsman – The Edinburgh Collieries Company has stopped work – temporarily, it is hoped – on the Diamond seam at Carberry Colliery. Fifty miners and oncost men have been thrown out of employment by the stoppage and most of these have signed on at the Musselburgh Labour Exchange for unemployment benefit. As a set-off to that, the Company is experiencing such a brisk demand for the product of its Wallyford Brickworks that another kiln is being constructed. There is an inexhaustible supply of material for brick making at Wallyford pithead bing.

1947 – 1969 – The 1985 publication ‘A survey of Scottish brickmarks’ suggests that the National Coal Board operated these works during this period.

1969 – 1972 – The 1985 publication ‘A survey of Scottish brickmarks’ suggests that the Scottish Brick Corporation operated these works during this period.