“A Survey of Scottish Brickmarks” lists little more than the word “Camps” in relation to this brickmark, so this is really an educated guess at where this brick was manufactured. Information on the Museum of Scottish Shale Oil website shows that the above works did have a brickworks on site. This, along with the use of “Camp” in the company name might suggest this brick was made at the Roman Camp Shale Oil Works, Uphall, Linlithgow, West Lothian. However, further, searching came up with a reference in the Edinburgh Gazette, dated June 24th 1898, to Camps Lime and Brick Works, Wilkieston, which better fits the bill. – GB

08/10/1877 – Sequestration of Joseph Day, contractor, Leith. John Coutts, Coal Merchant, Leith, has been elected Trustee on the estate; and William Torrance, Camp Lime Works, Kirknewton, Thomas M.Berry, Saddler, Leith, and James Gaudy, Quality Street, Leith, have been elected Commissioners. The examination of the bankrupt will take place in the Sheriff Court House, George IV. Bridge, Edinburgh, on Monday the 1st day of October 1877, at one o’clock afternoon. The creditors will meet within the New Ship Hotel, Shore, Leith, on Monday the 8th day of October 1877, at one o’clock afternoon. John Coutts, trustee.

1886 – 1889 – James Findlay, brickmaker, Camps, Wilkieston, Midlothian. (Note – SBH – I am not sure how Mr Findlay fits in here as Mr Torrance appears to be operating the works before and after him). 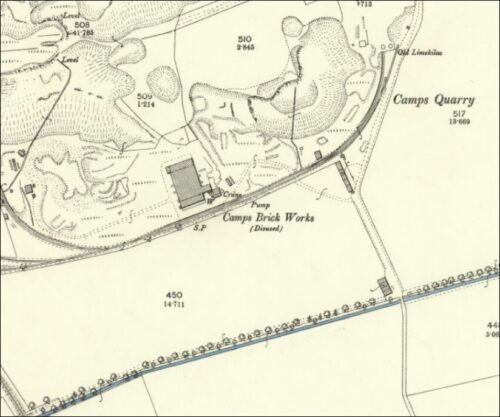 13/07/1895 – The Scotsman – I hereby intimate that Mr William Hislop, Mid- Calder has been appointed the sole agent for the sale of Camps bricks. William Torrance, Wilkieston, Midlothian.

24/11/1896 – Edinburgh Evening News – Sequel to a quarry accident. In Edinburgh Sheriff Court today, Sheriff Substitute Maconochie closed the record in an action by Patrick Devlin, labourer, East Camps against William Torrance, brickworks, Wilkieston for £500 or £156 under the statute as damages. Pursuer says that while in the defender’s employment he was carrying on blasting operations in their limestone quarry under the instruction of the defendant’s foreman. Owing to the want of special nippers usually employed in the process of blasting, a quantity of dynamite was exploded prematurely with the result that the pursuer was burnt about the face arms and limbs. His right eye had to be removed, he is almost blind in the left eye and totally incapacitated for work. The defenders deny that nippers were necessary and say the pursuer contributed to the accident by his carelessness.

13/04/1897 – Dundee Evening Telegraph – Suffocated by shirt band – Midlothian Police have been making enquiries into the death of James Cooper, aged about 50 years and of no fixed place of residence, who was found dead in a hut at Camp’s Brickworks, in the parish of Kirknewton early on Sunday morning. It appears that the deceased arrived at the brickworks on Saturday where he had an acquaintance and the two spent Saturday night drinking together at East Calder. They returned at night to the brickworks and lay down to sleep in one of the huts after consuming more drink which they had brought with them in a quart bottle. In the morning the companion failed to arouse Cooper and he gave information to the Police, who found the man to be dead. All the indications point to death having resulted from asphyxia caused by compression of the neckband of the shirt which the deceased wore.

27/03/1900 – Edinburgh Gazette – As trustee on the sequestrated estate of Thomas Alexander Torrance, Farmer, Burnhouse, trading as William Torrance, Camps Lime, Brick, and Fire-Clay Works, Wilkieston, near Edinburgh, I hereby intimate that my accounts of intromissions have been audited down to 12th March 1900, and that a dividend will be paid within the Chambers of Messrs. Romanes & Munro, C.A., 50 Frederick Street, Edinburgh, on the 12th May 1900. Charles J. Munro, C.A., trustee. Edinburgh, 27th March 1900.

12/10/1900 – Edinburgh Gazette – As trustee on the sequestrated estate of Thomas Alexander Torrance, Farmer, Burnhouse, trading as William Torrance, Camps Lime, Brick, and Fire-Clay Works, Wilkieston, near Edinburgh, I hereby call a meeting of the creditors, to be held within the Chambers of Messrs. Romanes & Munro, C.A., 50 Frederick Street, Edinburgh, upon Monday the 5th day of November 1900, at eleven o’clock forenoon, to consider as to an application to be made for my discharge as trustee. Charles S. Romanes, C.A., Trustee. Edinburgh, 10th October 1900.

13/09/1901 – West Lothian Courier – Accident.—A young man named William Bird, residing at the “Camps” Cottages, and employed at the Camp’s Brickwork, met with an accident on Monday afternoon while engaged at the pan-mill in the above works. Bird bad been engaged adjusting something about the mill when his hand got pulled in causing his fingers to be severely crushed. On his removal to the Royal Infirmary, Edinburgh, it was found necessary to amputate one of the fingers. Bird is progressing favourably.

04/03/1904 – Motherwell Times – On Tuesday night in Reid’s Hall, Carfin, Mr Wm, Scott, senr., kiln burner, and Mr Wm. Scott, junr., brickwork foreman, were the recipients of gifts from the workers of the Carfin Brickworks and a few friends. The former was presented with a silver-mounted walking stick, and the latter with handsome marble timepiece and watch appendage. Mr James Johnstone, of the United Collieries, Ltd., Brick Department, occupied the chair; and Mr J. F. Graham, cashier, made the presentations. Messrs Scott briefly and suitably replied. A very pleasant evening was spent, a number of those present contributing etc, and dancing was engaged in until an early hour in the morning. Messrs Scott have been promoted to similar situations at Camps Brickwork, near East Calder, belonging to the same company, and leave with good wishes for their future welfare from all with whom they came in contact within Carfin. The articles were selected from the stock of Mr Alex. Wiseman, Motherwell, and were very much admired.

11/11/1904 – Edinburgh Evening News – Destructive fire at Kirknewton. A somewhat destructive fire took place at Camps Brick Work belonging to the United Colliery Company Limited. The fire originated in the engine house where during the past few days the engine and other machinery have been under repairs. When first noticed the firm had got a firm grip of the building in which it started. Although a good supply of water was obtainable, the difficulty of turning it on the burning buildings was great. Within a short time, the building was completely enveloped in the flames and the engine and machinery were rendered useless, the roof collapsing. Efforts were made to prevent the fire from spreading to the adjoining buildings but were only partially successful, considerable damage being done. The amount of damage is considerable. Those employed at the works will be idle for some time. 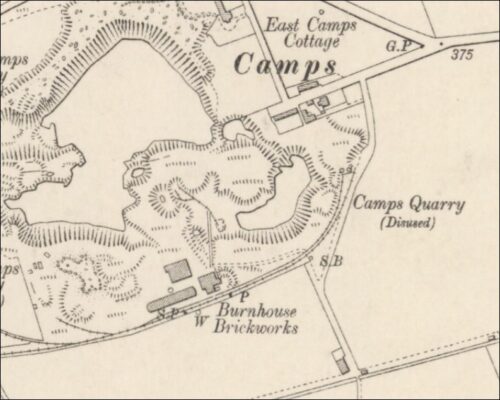 15/01/1914 – Dundee Courier –  Death of well known Methil Man -There passed away yesterday after a period of failing health a well-known Methil man in the person of Mr David Philip at his residence, Craigie Lea, Innerleven.  Born 66 years ago at Dysart, Mr Philip started work in the pits in Wemyss district, and was appointed, while quite young, manager of the Invertiel Lime Works, Kirkcaldy, and was afterwards promoted by Mr Torrance the proprietor, to his larger works at Camps. East Calder.  Mr Philip returned to Fife on securing the management of the Wemyss Brickworks, Methil, a position he held for several years until the business was discontinued.  He was at one time the proprietor of the Commercial Hotel, Upper Largo, and up to his death held the license for Dock Tavern, Methil.  He was a man of a generous and kindly disposition, and so universally were these characteristics appreciated that he was known as “Uncle Davie.”  Mr Philip was an enthusiastic volunteer and was a member and bandsman of the 10th Company (Wemyss) R.G.A.  He was a keen bowler, and an ardent Freemason of Lodge Balfour, Methil.  The deceased is survived by a widow and five sons. 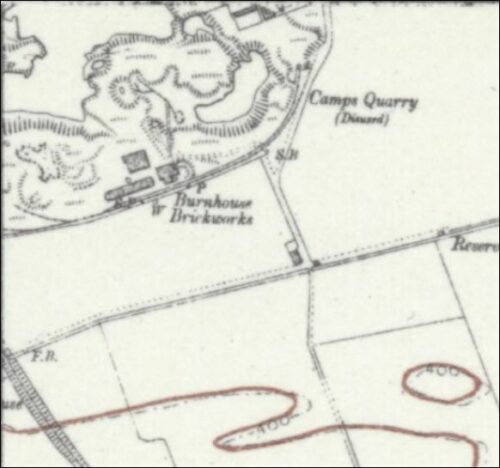