Interesting theory regarding the variations of the same ‘Newbattle 1862’ stamp found on a number of bricks in the Dalkeith area.

Ian Suddaby states – This photograph charts the disintegration of the brickmark within a wooden mould. The letters and numbers were made of metal and must have been either screwed or riveted onto the base of the mould. Over time and without maintenance, the letters become either loose or completely detached. Why they didn’t repair the mould boxes is beyond me, producing bricks with partially detached or missing letters is hardly good for the company reputation you’d think.

So, from the bottom left clockwise:

The brickmark is in good order.

The E has become partially detached and misaligned.

The N has also become partially detached and misaligned

The N & E have broken off completely

So we end up with EWBAT 1862. I’m not claiming all these were made over days or weeks in a single brickmould. I don’t know how many mould boxes a small brickworks would have but this decline might well indicate a general lack of time and money. They aren’t good quality bricks, the presence of surprisingly large stones has caused several to crack but they are very attractive.

Made at the old Newbattle Brick & Tile Works in Newtongrange, Midlothian, Scotland and found nearby. 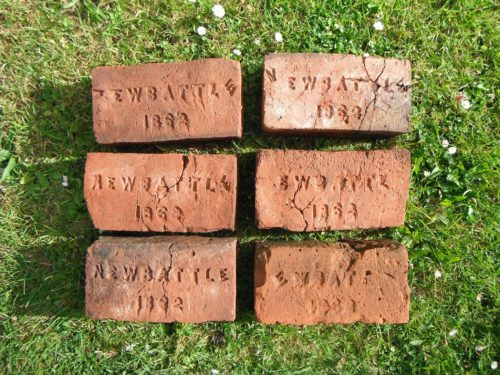