Below – 1949 – 1969 – Side by side map showing the works from the air on the right and its location on the old railway sidings. 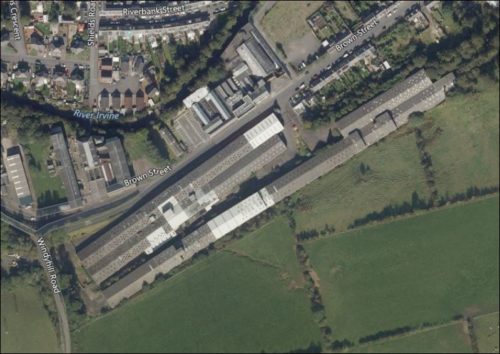 11/1963 – Refractories Journal – The Vesuvius Crucible Company of Pittsburg, Pennsylvania, USA are to locate a new factory at Newmilns, Ayrshire. They will make crucibles for the metallurgy industry and ceramic plugs for furnaces. This latter work is claimed to be a completely new production for Britain. The Scottish Council (Develpment and Industry) has been co-operating with the American company for the past three months in finding a suitable location. The traditional textile industries are declining, giving a good supply of labour as well as anxiety to locate and attract new industries. The reasonable cost of the factory, a former lace mill and the good supply of local skilled labour were factors which encouraged this development to locate at Newmilns. Initially, the firm will employ twenty men, building up to a labour force of about fifty within the first year. The town council is co-operating fully and is anxious to see other industries located in the vacant mills in the town.

1987 – Vesuvius Crucible Company, a ceramics supplier, was bought over by Cookson Group.

The Irvine Valley’s biggest employer Vesuvius UK is to close its Newmilns factory with a loss of 180 jobs.

Management told shocked workers last Thursday that they would be made redundant within the next 12 months.

Vesuvius bosses have been carrying out a review of their worldwide manufacturing plants since last October.

It has been decided to close three of the European operations namely Newmilns, Emmerich in Germany and Hautrage in Belgium.

A phased run-down is planned for the Newmilns factory in Brown Street which manufactures furnace and foundry products.

The Viso and Clay Graphite operations will be wound up by June 30 and the Mix operations stopped by December 31.

One worker said: “Most of us here have given over 20 years of service to the company. We did not know this was coming. It was a real shock. I think the company has had it planned for a long time.”

Last year, 11 workers took voluntary redundancies at the Newmilns factory while other employees agreed to reduce their shift hours to save jobs.

A father-of-three said: “I lost £300-a-month in agreeing to work shorter or less shifts. Vesuvius told us doing that would save jobs, but they were simply dwindling down our contracts and work. This has all been done in a very nasty, underhand way.”

Richard Sykes, managing director of Vesuvius UK, blames the economic downturn for the “unprecedented and rapid reduction” in production in the steel and foundry industries.

Mr Sykes said: “There have also been rapid changes in technology and operating practices. This demands longer life products which result in lower volume. Together with higher energy and operating costs, these factors require us to consolidate production into areas where we have existing manufacturing capacity.

“Despite concerted efforts by everybody involved with the Newmilns facility, we do not believe there is any alternative to withdrawal from manufacturing.

“We fully recognise and regret the impact that the proposed closures will have on our colleagues, many of whom have worked for Vesuvius for a long period of time, and every effort will be made to provide assistance, retraining and support in the search for alternative employment.”

Some 27 staff who are employed with Vesuvius business division at the Newmilns factory will keep their job and be based at a new location in the area.

Newmilns councillor Bobby McDill said: “Whilst we strive to encourage the company to reconsider its position on the Newmilns plant, we will make it a high priority to support the workforce, which has demonstrated loyalty and commitment to the business over the last four decades, at this difficult time.”

Website – Vesuvius and the American Boom – In 1916, the American steel industry was booming. More and more Americans were demanding automobiles – some 2.5 million of them owned a car by 1916. And when the US entered the war, there was a surge in demand for domestic steel to produce armaments. Enter the Vesuvius Crucible Company, with a mission to produce the most effective clay graphite crucible for melting steel.

Founded in Pittsburgh by the Arensburg brothers and their friend Arthur Jackman, Vesuvius was well-placed to capitalise on the dramatic increase in steel production across the United States. By 1919, we were making developments in the stopper head category, with further innovations coming throughout the first half of the 20th century.
The birth of Foseco – In Birmingham, UK in 1932, Eric Weiss and Dr Kossy Strauss set up Foundry Services Ltd – the company that would become Foseco. Dr Strauss was a chemist, and with Eric Weiss on the commercial side, their mission was to provide products and services that truly supported the foundry industry. They began with six flux products that they improved iteratively as they learned more about their customers. In the 1940s, Foseco developed Feedex powder and Ferrux anti-piping covers, with more innovations and expansion overseas following.

1950 – 2000s – In the second half of the 20th century and the beginning of the 2000s, both Vesuvius and Foseco pioneered new generations of technology that would transform their sectors. Solutions such as Feedex sleeves that improve dramatically the productivity and quality of foundries, our fused silica crucible, the only process that can produce the polycrystalline silica that’s used in solar panels – and Viso, our isostatically pressed product that allows the continuous casting of steel. Or our fully automated robotic system to manage refractory tube insertion that both improves steel quality and reduces the risk of injury to workers. Throughout this time, the Vesuvius company grew exponentially as we set up offices and factories overseas and made acquisitions – Foseco and Flo-Con among others – that expanded our offer and presence around the world.

Innovating for the future – Today, with 17 research centres across the globe and an annual investment of £33.2 million in research and development, Vesuvius continues to lead innovation in our industry. From our origins in Pittsburgh to the establishment of our newly opened R&D centre for Advanced Refractories in Visakhapatnam in 2017, we have always innovated for our customers, anticipating the development of breakthrough technology and processes. Today, we are exploring new ways to integrate continuous data capture into our solutions to give our customers the insights they need.