Caledonian Brickworks – this site was previously known as the Larkhall Brickfields and by 1938 they were known as Birkenshaw Brickworks.

11/11/1904 – Hamilton Herald – Scap merchants successful defence – Sheriff Thomson has just issued his interlocutor in an action at the instance of Charles Bramall, Caledonian Works, Larkhall, against George Smith scrap merchant, Hattonhill. Carfin. The pursuer asked the Court to ordain the defender to deliver to him certain articles of machinery alleged to have been removed by the defender from the works of the Larkhall Fireclay Company Limited at Birkenshaw, and, failing his so delivering to the pursuer within such period as the Court should appoint to ordain the defender to pay to the pursuer the sum of £100 sterling … Hamilton, 3rd November. 1904. – The Sheriff Substitute having considered the proof and the whole process finds in fact (I) that the pursuer purchased the fixed machinery and plant of the Larkhall Fireclay Co. Ltd., from the liquidator of that company … 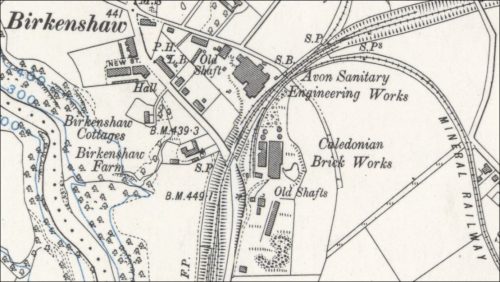 Below – 06/12/1921 – Sheffield Daily Telegraph – Death of Mr Charles Bramall, owner of the Caledonian Brickworks in Larkhall. 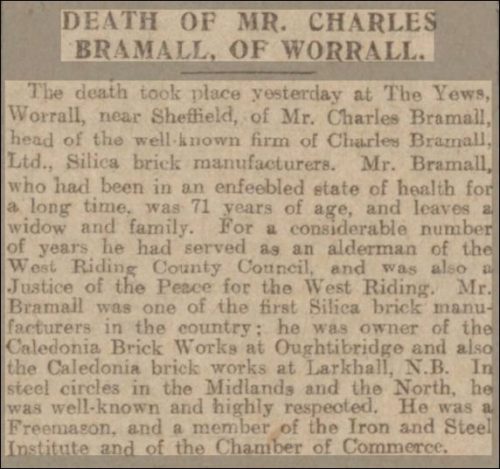 04/01/1974 – Wishaw Press – Caledonian Brick Co Ltd. Clerkess. We require a clerkess for our head office situated in Newmains. The successful applicant would be required to operate a small switchboard and also assist in various clerical duties. Applications, in writing only, should be addressed to The Accountant. Caledonian Brick Company, Church Avenue. Newmains. Wishaw, Lanarkshire, ML2 9PX.

05/04/1974 – Wishaw Press – Caledonian Brick Co Ltd. Wage clerkess. We require a Wage Clerkess for our offices situated in Newmains. Applicants should have a thorough knowledge of wage procedure and be capable of handling a payroll of approximately 200. Some knowledge of machine accounting is also preferable but this is not essential as training would be given. Applications in writing stating age, experience and present salary, should be addressed to: – The Accountant, Caledonian Brick Co Ltd, Church Avenue, Newmains, Wishaw ML2 9PX.

19/04/1974 – Wishaw Press – Caledonian Brick Company require an office manager for their Newmains office. He will be responsible to the accountant for routine administration and will have some involvement in the production of management accounts. The successful applicant should have a thorough knowledge of bookkeeping and the ability to control a small staff. The company operated a free life assurance and contributory pension scheme. Applications should be addressed to – The Company Secretary, giving details of age and experience. Caledonian Brick Co Ltd, Church Avenue, Newmains.

22/08/1975 – Wishaw Press – Assistant accountant. Caledonian Brick Co Ltd require an energetic young man, preferably studying for a recognised accountancy qualification, to assist the accountant in the preparation of monthly management accounts and cash forecasts. Responsibility will include the supervision of the day to day office routine. Salary will be commensurate with the responsibility involved. Applications giving details of age, experience and present salary should be sent to The Financial Director, Caledonian Brick Co Ltd, Church Avenue, Newmains, Wishaw.

Joseph Bramall, senior, was born into a farming community in Oughtibridge near Sheffield in 1807.
By the time he was 30, he had built up an industrial supplies business selling metal goods such as
files, tools and metal implements etc. His company Joseph Bramall & Sons was also selling ganister
(or gannister) for field walls and road repairs and in ground-form (initially from road surface
scrapings) as a refractory lining material for use in cupolas in the growing Sheffield steel industry.
Gannister is a very hard siliceous rock with the local Sheffield rock having a SiO2 content of over 90%
and was quarried and mined throughout the Western fringes of Sheffield. The Sheffield ‘blue best’
gannister is a particularly pure form (SiO2 as high at 98%) and has very good heat-resistant qualities
ideal for use as a refractory lining either as a rammed material or as a gannister silica brick.
The gannister rock has to be ground to a fine material and Joseph Bramall is credited by many as the
pioneer in developing a grinding machine capable of grinding the rock to the small grain sizes
needed and thus lead to the commercialisation of gannister-based refractories. Other Sheffield men
(John Armitage or J. Grayson Lowood, both of nearby Deepcar) are also credited with this grinding
machine development and as they all lived within a few miles of each other there may well have
been parallel developments!

Silica brick manufacture had started in 1822 in South Wales as ‘Dinas’ bricks at Pontneddfechan in
the Neath Valley and one of the developers, William Weston Young, moved to the Sheffield area and
established a silica brickworks, Russell & Young, in the 1830s in Oughtibridge. That works was
reformed in 1867 as the Oughtibridge Silica Firebrick Company, later part of General Refractories
Group founded by Frank Scott Russell in Sheffield in 1929. Other manufacturers in the Deepcar and
Stocksbridge area began production around this time and names such as John Armitage, Thos.
Brooke, William Brooke and J.Grayson Lowood became famed for their silica bricks. Most of them
also became part of General Refractories Group, later GR-Stein Refractories Ltd., later Hepworth
Refractories Ltd., now Vesuvius plc.

Stocksbridge was the home to the Samuel Fox steelworks and they themselves also mined gannister
locally and provided a ready local market for the brickmakers and ground gannister producers.
Henry Bessemer patented his converter in 1855 and the first converter was built in his Sheffield
works in 1856 with other Sheffield steelmakers including Samuel Fox taking licenses to use the
technology as Sheffield became the birthplace of modern steelmaking. Converters provided a need
for increased volumes of refractories particularly silica-based ones.

Between 1830 and 1880 the Bramall family rented, leased and bought land suitable for mining and
quarrying gannister and became major dealers in ground ganister with goods sold as far afield as
Russia (one order in 1872 from a customer in St. Petersburg being for 200 tons), France and the USA.
By 1893 there were no less than four Bramall family members listed in local directories as separate
gannister dealers with Charles (born 1850) eventually becoming the foremost among Joseph’s five
sons. Charles became an alderman of West Riding County Council and a Justice of the Peace for
West Riding.

Around 1865, the Bramall company opened a brickworks with one beehive kiln, Birtin Works, in
nearby Worrall and this made Silica bricks alongside its ground gannister production. A larger works,
Caledonian Works, opened nearby in 1871 to manufacture both gannister-based and fireclay-based
bricks. Brick manufacture ceased at Birtin Works in 1889 as gannister brick production transferred to
the Caledonian Works. A smaller brickworks, Bradshaw Works, was established near some gannister
mines and quarries at Bullhouse near Langsett to the north of Stocksbridge.

Birtin Works closed and was recorded as disused by 1923; the Caledonian Works grew from 3
beehive kilns in 1880 to 16 (2 rows of 8) by 1910 reducing to 8 kilns by 1920 and closed sometime in
the early 1930s while Bradshaw Works was recorded as still operating with one kiln in 1931 but is
thought to have closed soon after. It’s known that Bramall family members Charles and Mary
invested in the Larkhall Fireclay Company Ltd., Caledonian Works, Larkhall, South Lanarkshire,
Scotland around the 1920s to 1930s until those works themselves closed in 1937 and were sold to
others.

As the steel industry grew and silica brick production increased it appears that larger, perhaps better
financed, companies invested and developed to manufacture silica bricks. The Bramall family appear
to have gone back to farming and other pursuits and the Bramall Company slipped into history.
Their development of the gannister grinding machine means that they played an important albeit
little known part in the development of silica refractories; the development of the use of Bessemer
converters and the creation of modern steelmaking. 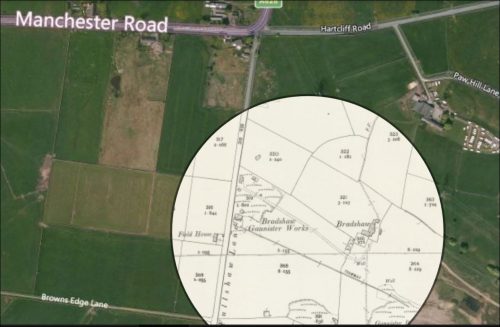