Below – 29/05/1829 – Glasgow Herald – Property for sale in Sydney Street. The owner is George Johnston, brickmaker. 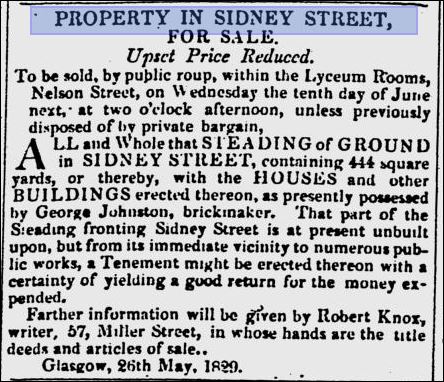 12/07/1845 – Glasgow citizen – The City Theatre is built from original plans by William Spence Esq, an architect of this city. The brickwork by Mr Robert Barr of Bellgrove Place.

The City Theatre was built in 1845 by John Henry Anderson, known as “The Wizard of the North” during his earlier career as a travelling conjurer. The theatre had a capacity of 5,000 and occupied a plot on Jail Square at the edge of Glasgow Green, opposite the Justiciary Buildings at the foot of the Saltmarket. The theatre burned down on 18 November 1845, five months after opening. 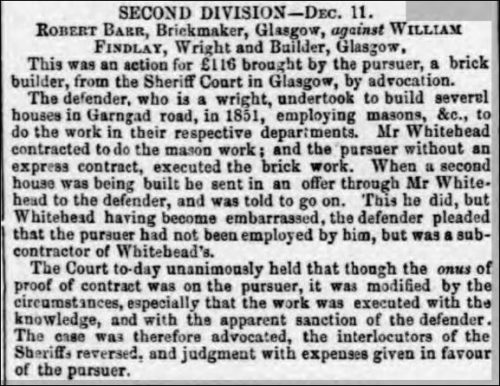 10/09/1856 – Glasgow Herald – The Whitevale Brickfield, entering from Foundry Open and East Neilson Street, Gallowgate. Apply to the proprietor on the ground.

Below – 14/01/1863 – Glasgow Herald- Brickfield to let. The brickfield in Foundry Open, Gallowgate, within a mile of the cross, as at present occupied by Mr Robert Barr. Apply to Mr McCasland, Gartcraig by Shettleston or to Mr Peter Shannon, Builder, 105 Stockwell Street.