Many thanks to Ian Green and Jill Williams, Edinburgh for their outstanding assistance with regards information relating to these works. The references below come mainly from census and valuation roll entries.

1848 – 1845 – In the year of Robert’s move to Union Place, there is the first mention of Henry Struthers, as presumably the owner of Wardie Brickworks. He remains such until 1854, and then disappears. 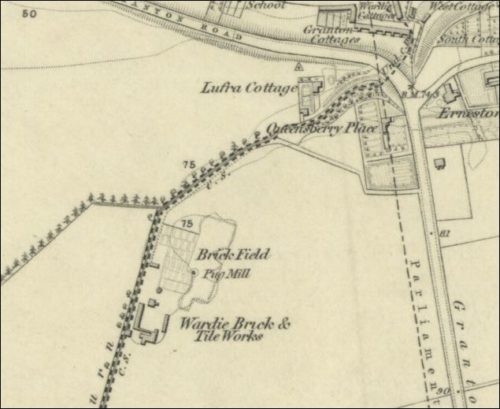 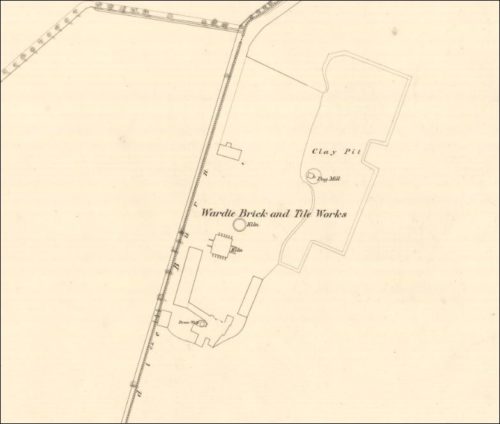 1852 – 1853 – ScotlandsPlaces – Wardie Brick and Tile Works. A brick and tile work situated about one-half mile south of Granton, on the Wardie Burn, occupied by Archibald Struthers, Winchburgh. It keeps employed an average of about 8 men throughout the year.

1852 – 1853 – ScotlandsPlaces – Wardie Brick and Tile Works.  Situated to the West side of Granton Road. An extensive brick & tile works situated on the West side of the Granton Road; the property of the heirs of the late Captn [Captain] Boswall and occupied by Mr Struthers.

Below – 18/04/1855 – North British Agriculturist – Robert Bruce, bricklayer and furnace builder, Edinburgh and George Ingram, brick and tile maker, manufacturer, Portobello take leave to intimate that they have acquired the lease and plant of Wardie Brick and Tile Works near Granton, held and carried on for several years past by Mr Henry Struthers and that the business will in future be carried on in all its branches under the firm of R Bruce & Company, brick and tile works, Wardie, near Edinburgh. March 1855.

With reference to the above intimation and formation of copartnery, Robert Bruce begs respectfully to intimate that he is carrying on, as formerly, the business of bricklayer and furnace builder and that orders sent to his place of business, 23 Union Place, Edinburgh or Waldie will be punctually and carefully attended to. R.B. would also take this opportunity of thanking his friends and the public for the liberal support they have bestowed upon him for the last 25 years and he hopes by strict attention and integrity to merit a continuance of the same. 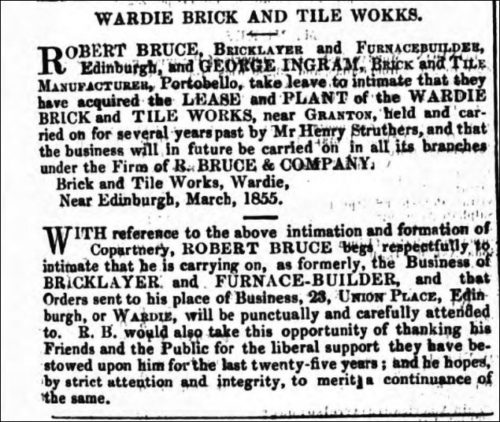 1863 – After what was presumably the demise of Wardie Brickworks, Robert is involved with Bridgehouse Brickworks.