Found by Ian Suddaby in the Edinburgh area.

The manufacturer of this brick is unknown. I have included it here as it could be of Scottish origins.

UGB – stands for United Glass Bottle Manufacturers Ltd. They were formed in 1913 and folded in 1999.

This has the look of a high silica content brick.

It is unknown if UGB had possession of a brickworks themselves and manufactured their own bricks or did they buy in their bricks with their logo already stamped thereon.

I note this detail regarding UGB and their ownership of the Portobello brickworks near Edinburgh  – “After the death of Victor Wood in 1935, the old Family connections ceased and in 1937 Woods Bottle Works (1920) Ltd. was taken over by The United Glass Bottle Manufacturers Ltd. A new batch house was built in 1937 and a third furnace, a Teisen Recuperative Furnace, was built alongside No. 62 Furnace at that time known as the oil tank” 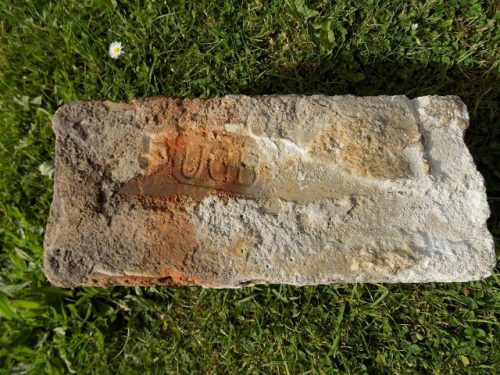 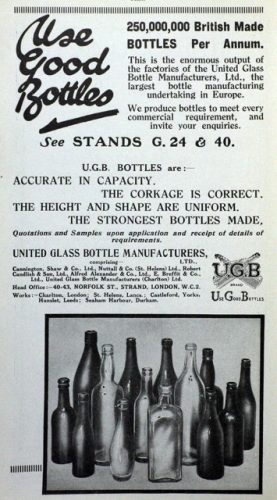 “I am pretty certain UGB did not have a brickworks of their own which manufactured their Glass Furnace bricks. I would suggest they had them made by the Ravenhead Sanitary Pipe and Brick Company, but not at the brickworks half a mile away, rather at the Upholland near Wigan one.

They in their sales description of around 1910 describe their Firebrick as being used for the past 40 years by some of the largest Iron, Glass, and Bottle Manufacturers in the UK. Having the initials UGB on the Brick, signifies that it was uniquely made for them with their specific operating conditions [this was a particular brickworks sales pitch], and also was not likely to get mixed up in the storage yard prior to delivery.

However there are a number of locations in Scotland itself with the Strata containing the sand ingredients suitable for the production of appropriate bricks, and the Eglington Silica Brick Company Ltd in Glasgow produced a high temp’ brick. I do not know if a Scottish brick was used, but again would suggest the placing of initials in the moulds at another company would add to the cost, and UGB were an efficient company who I think would standardise their operations at both of their factories in St Helens/Edinburgh.

Obviously the fact that the brick Ian found had UGB on it means that its age varied between 1937 when they took over the Woods Bottle Works, and 1967 when it closed down.”

Tagged with: Manufactured in Scotland and branded for National and Overseas Customers, Teisen, UGB