(Note – SBH – Please read this in conjunction with the Darngavil Brickworks, Torphicen as they may well all have been situated on the same site and known by the various names)

09/04/1861 – Dunfermline Press – Scotch bankrupts – William Arthur, brickmaker at Bridgehouse Brickwork and residing at Bridgehouse Cottages in the Parish of Torphichen and the County of Linlithgow.

Below – 21/02/1863 – The Scotsman – Bridgehouse Brickworks for sale. Proprietor William McFarlane Wardrope Esquire of Bridgehouse. Mr William Arthur is resident at the Works. 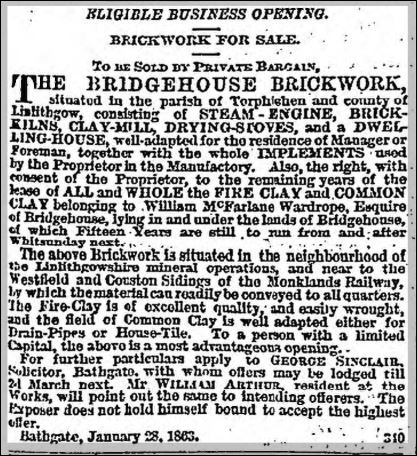 Below – 26/05/1864 – Falkirk Herald – Important notice to owners of collieries, ironmasters, builders &c, proprietors of Bridgehouse Brickworks, having now completed their arrangements are prepared to supply every description of fire clay, composition and common clay goods, which will be found of the best quality. Prices Moderate. N. B.—The works are in communication with the Monklands Railway (Couston Siding) and within a short distance of Bathgate and Armadale. Orders can be sent directly to the works at Bridgehouse, Bathgate or to 23 Union Place, Leith Walk, Edinburgh. 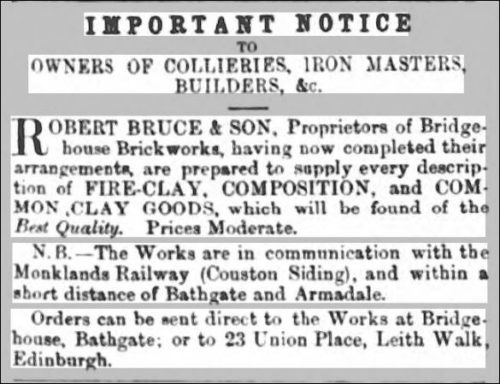 23/11/1864 – Glasgow Herald   – Linlithgow  – Going brick and tile works to let with immediate entry.  The brick and tile works at Bridge-House in the Parish of Torphichen and County of Linlithgow on the Estate of William MacFarlane Wardrop Esq, for a period of 29 years with a break in the lease, in the option of the tenant, at the end of 14 years. Entry immediate. The machinery and plant on the premises are in excellent going order having been recently fitted up upon the most approved construction. The supply of both fire and common clays is abundant, the quality is excellent and well adapted for making all kinds of brick and drain pipes. The works are within 3 miles of the Town of Bathgate and near coal fields where the requisite supplies of coal may be had cheap. The Couston siding of the Monklands Railway is also within a mile’s distance, by which the produce of the works has the ready access to all parts of the country. The machinery and plant may be had either at the sum to be agreed upon or according to valuation. The works will be shown by the overseer on the spot, who will give all other necessary information.

Below – 18/02/1865 – The Scotsman – Bridgehouse Brickworks for sale… 3 miles North of Bathgate … Materials owned by Robert Bruce. 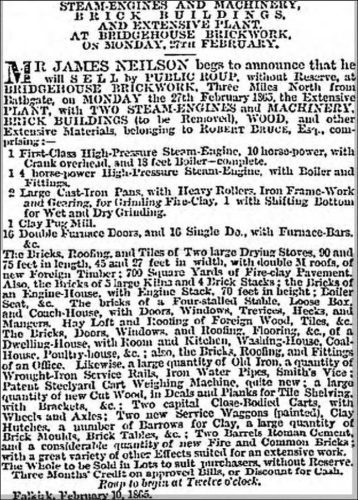 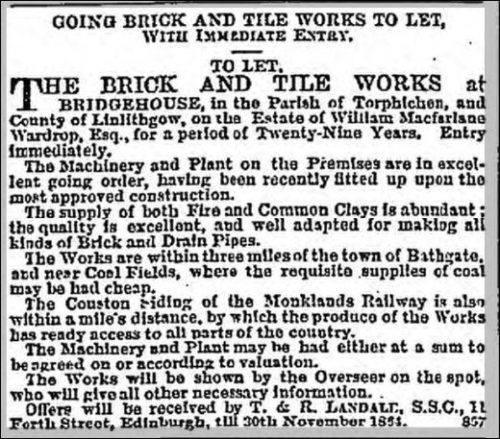 15/03/1935 – Linlithgowshire Gazette – Reference to an accident between a lorry and a bicycle. The lorry driver was travelling to the Bridgehouse Brickworks from West Calder.

23/12/1938 – West Lothian Courier. This is an article regarding the motoring offences referred to in the post-dated 24/03/1939 but it mentions the Bridge Castle Brickworks near Armadale. Surely this should be Bridgehouse?

24/03/1939 – Linlithgowshire Gazette – Article regarding motoring offences in October 1938 … On 2nd November 1938, the accused drove another car from Bridgecastle Brickworks Bridgehouse. with five passengers …

06/05/1944 – Falkirk Herald – Article about a prisoner of war … David Stevenson (26) … He is a native of the village of Standburn and was educated at Drumbowie Public School. Thereafter, he was employed as a brick-setter at Bridgehouse Brickworks, near Armadale, travelling to his work from Maddiston, where he resided with his sister, Mrs Baff. He enlisted and became a Regular Army soldier in 1937 …