(Note – SBH – There are 4 brickfields at this location and I think they may be the Newlands Brickfield as shown on the map below and at least one of the other Brickfields was possibly that belonging to the Camlachie Brickworks which are also stated as being on Porter Street or to the South of the Shotts Road? I think William Guild was the proprietor and Archibald Binnie was a one-time tenant. It is rather confusing though!).

Robert Corbet & Son – Masons and brickwork contractors. Robert Corbet (c. 1812–1880) was an established master bricklayer, in Bridgeton, in the East End of Glasgow. In 1857, he was contracted to build ‘the tallest chimney shaft in the world’. This stood at J. Townsend’s chemical works in Port Dundas, and was eventually 468 feet (142.65 m) high, topping the nearby ‘Tennant’s Stalk’.

Corbet’s firm also made bricks, and in the mid-1870s acquired Newlands Brickworks, London Road, in an area with a high concentration of that industry. Two of Corbet’s sons joined 80-odd other employees, becoming assistant bricklayers in the 1870s. However, one died in 1877, leaving Walter Corbet (c. 1852–1923) working with his father. The firm’s style was changed to ‘Robert Corbet & Son’ around 1879, and then to ‘& Sons’ around 1886. In that year, Walter and younger brother John Burns Corbet sold the brickworks, including pressed, circle, scuntion, header and common bricks … navvy and masons’ barrows, windlass, hand pumps … ropes and blocks.

Walter, a bachelor, lived with his mother on Onslow Drive, Dennistoun, from where he also ran the business, until both their deaths in 1911. John B. Corbet left a sizeable estate of £11,021, in 1931, but the firm continued until entering voluntary liquidation in 1969.

Robert Corbet was religiously inclined and was heavily involved in the Free Church from the 1850s to the 1870s.

1849 – 1850 – Robert Corbet, brickmaker and builder, 43 Stevenson Street, Calton. (Note – SBH – I am uncertain if this entry is related to the Newlands Brickworks or some other location – perhaps his home address).

04/04/1853 – Glasgow Herald – Supper and presentation – On the evening of the 29 ults, Mr William Corbet, late foreman to Mr Robert Corbet, brickmaker and builder, was entertained by his friends in the Tontine Hotel, for the purpose of testifying their esteem and regard for him, previous to his leaving for Australia. The chair was ably filled by Mr Matthew Loudoun and the office of croupier by Mr William Coulter. After a sumptuous supper, the chairman, in a very suitable address, and in the name of the company, presented the honoured guest with a purse of sovereigns. Mr W. Corbet acknowledged their kindness in a neat and appropriate reply. (Note – SBH  – I am not sure if this entry relates to the Newlands Brickworks as the above information on Robert Corbert and Sons states they purchased Newlands Brickworks in the mid-1870s? I suspect this info is wrong as I have a brick stamped “Robert Corbet, Newlands 1866”)

Below – 1857 – Newlands Brickfields and Claymill. 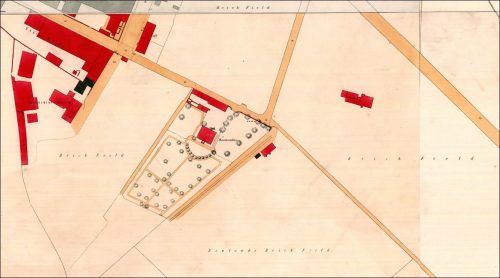 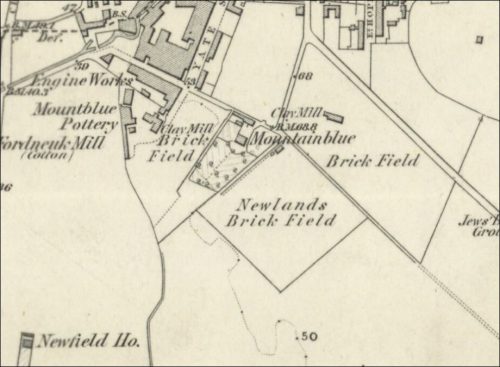 Below – 14/12/1860 – Glasgow Herald – Small debts court. Robert Corbet, brickmaker, Mile-end, Glasgow fined £10 for not having a brick making machine sufficiently guarded against injury. An eleven-year-old child was injured when he lost part of a finger. 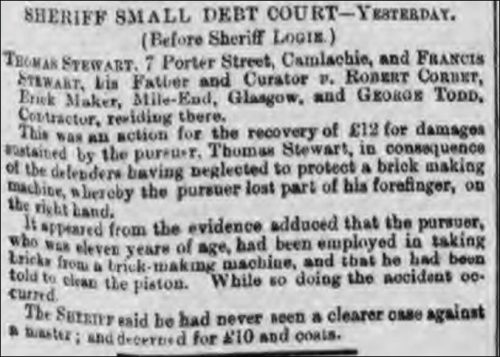 22/11/1861 – Glasgow Herald – Notice to debtors and creditors – Mr John Bogle, brick manufacturer in Glasgow, having executed a trust deed for behoof of his creditors in favour of William Lang, Accountant in Glasgow, creditors are requested to lodge their claims with Lang & Graham, Accountants, 98 West George Street, Glasgow within 1 month from this date and debtors are required to make their payment of their debts within the like period. 18/11/1861.

30/11/1861 – Glasgow Herald – P.Burn & Co beg to intimate that they are instructed by Lang  & Graham accountants to sell the whole stock of bricks, brickfield utensils, horses, carts and harness belonging to the Trust Estate of Mr John Bogle, Brickmaker. On view before the sale. Sale begins at 12 o’clock.

24/02/1862 – Glasgow Herald – Bricks for sale – to sell about 250,000 bricks, hand made and of a very superior quality belonging to the trust of Mr John Bogle may be seen at the Field, Porter Street, Camlachie. Offers for the whole or any quantity will be received by Lang & Graham. Accountants, 98 West George Street.

14/04/1862 – Glasgow Herald – Brickfield at Newlands to let with immediate entry. The brickfield at Newlands, near Camlachie, consisting of upwards of 5 acres, as lately possessed by Mr John Bogle will be let for such period as may be agreed upon. Part of the clay has been already wrought and is of the best quality …

11/03/1870 – Edinburgh Gazette – Sequestration of Thomas Porter, brick-builder, Henrietta Street, Glasgow. James Carstairs, accountant in Glasgow, has been elected trustee on the estate; and Robert Corbet, Brickbuilder, Glasgow, James Aitken, wine and spirit merchant, Glasgow, and Robert Borland, brickmaker, Glasgow, have been elected Commissioners. The examination of the bankrupt will take place in the Sheriff Court-house, Glasgow, on Wednesday the 23rd current, at 12 o’clock noon. The creditors will meet in the Office of Messrs Barr & Carstairs, Accountants, No. 33, Renfield Street, Glasgow, on Thursday the 31st current, at one o’clock P.M. James Carstairs, Trustee. Glasgow, March 10, 1870.

12/06/1875 – Fife Free Press – The Tallest Chimney in the World. The tallest chimney in the world is the Townsend chimney, Glasgow. It was built by Robert Corbett, of Glasgow, for Joseph Townsend, of Crawford Street Chemical Works. The total height from foundation to top of coping is 468ft, and from ground-line to summit, 454ft; the outside diameter at foundation being 50ft, at ground surface 32ft and at the top coping 12ft. 8 in. (Note – SBH – I assume Mr Corbett used his own building bricks?). 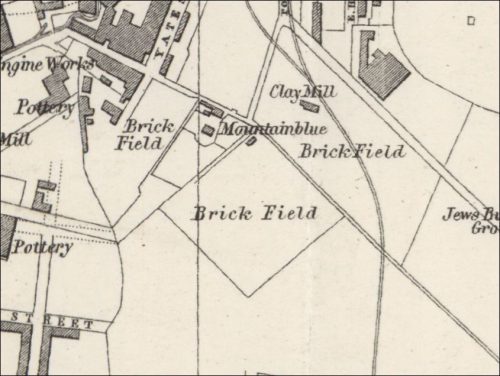 17/02/1883 – Glasgow Herald – Cruelty to animals – Justice of the Peace Court, Glasgow. William Suttie, stable foreman, Robert Corbet and Sons, brickmakers, Glasgow residing at Great Eastern Road and John Redmond, carter, having pleaded guilty to ill-treating a horse on the 30th in London Road, by causing it to draw a cart when the animal was suffering from a large suppurating sore on its back under the saddle, were fined. Suttie 20s and teh carter 2s 6d.

20/03/1885 – Glasgow Herald – We beg to intimate that Alexander Hunter has ceased to be a partner of or have any connection with our firm and has no authority to receive money or grant any obligations on our account. Robert Corbet & Son, Walter Corbet. Newlands Brickworks, Westthorn. 19/03/1885.

06/05/1885 – Glasgow Herald – Scotch sequestrations – Alexander Hunter, brickmaker and builder, Newlands Brickworks, Westthorn, London Road, Glasgow, a partner of the firm of Robert Corbet & Son, brickmakers and builders there, as such partner, and as an individual. Creditors to meet in the Faculty Hall, Glasgow, 13th May, at twelve.

05/06/1885 – Glasgow Evening Post – Glasgow bankruptcy court – The examination bankruptcy of Alexander Hunter, brickmaker and builder, Newlands Brickworks, London Road, partner of the of Robert Corbet & Son, was to take place today before Sheriff Murray. The bankrupt failed to appear, and warrant was granted for his apprehension. 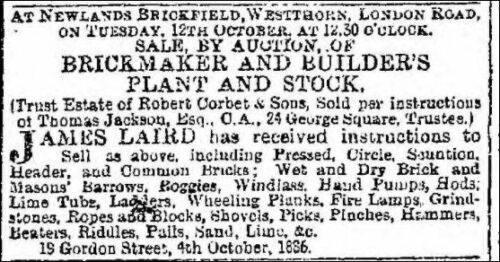 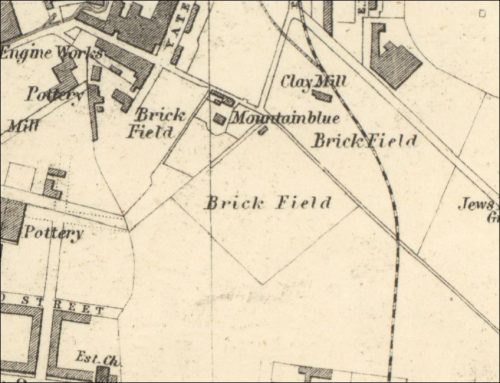